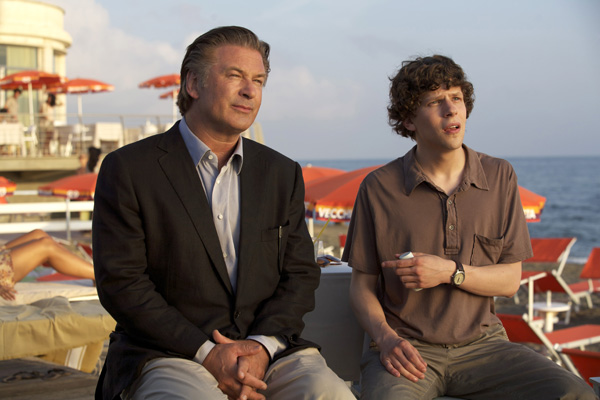 Well, another year has past, so like clockwork it’s time for another Woody Allen movie. Make one film per year for over forty years and at a certain point you’re bound to end up going through the motions some of the time rather than coming up with genuine inspiration with every at bat. As a fan of the icon of nebbishness, it’s kind of expected that the Woody will have plenty of mediocrity amongst flashes of brilliance if you follow all of his work. Last year we were treated to his best movie in ages with Midnight in Paris and it would be almost unfair to expect another one of those as a follow up at this point in his career. To Rome with Love might continue the filmmaker’s late career European tour in search of inspiration, but it’s also one of the most generic movies to come out of Allen’s rusting typewriter in quite some time.

This “movie” is more of a collection of half-finished shorts and ideas strung together by a filmmaker who had an opportunity to make a project in Rome, rather than something specifically crafted for the picturesque setting. This being a Woody Allen movie, the cast is inevitably spectacular and there are flashes of that Woody-wit we all know so well. Sure, it’s a shame that he didn’t take a little time to pull all those pieces together into something resembling a movie, but at least it’s a fun n’ breezy little diversion for the filmmaker. Never forget that he made Curse of the Jade Scorpion and Scoop over the last decade as well. Things could be better with this picture and they also could be a hell of a lot worse. That strikes me as being the type of thoughts that float through the mind of the filmmaker who obsessively cranks out a film every year without ever rewatching one of his projects after completion. A guy in his position has the right to say, “Eh, that kind of worked. I’ll get em next time.” After all, he’s probably the only director in the world who can guarantee that next movie is only a few months away.

To Rome with Love is one of Woody’s ensemble pieces. Sometimes that means a multifaceted look at a theme intriguing the comic-turned-director a la Radio Days or Hannah and Her Sisters. And sometimes that just means he’s got a collection of ideas at the bottom of a bag too long for a New Yorker piece and too insubstantial for a feature like You Will Meet a Tall Dark Stranger or this bowl of Italian fluff. The stories are as follows. The best stars Roberto Benigni as a deeply average Italian man inexplicably made a celebrity one day and forced to deal with being hounded by paparazzi and pursued by beautiful women. Woody Allen stars in the next short as a failed opera director who travels to Rome with his therapist wife (the much missed Judy Davis) to meet their daughter’s (Alison Pill) new fiancée (Flavio Parenti). Once there he discovers his new son-in-law’s father (tenor Fabio Armiliato) is a talented singer, but only in the shower, requiring some creative staging to show off his talents.

But wait, we’re not done with the competing storylines just yet. There’s also the tale of two newlyweds (Alessandro Tiberi and Alessandra Mastronardi) who arrive in Rome for their honeymoon, but end up comically separated and spend the time pursuing accidental new relationships with a prostitute (Penelope Cruz) and a movie star (Antonio Albanese), respectively. Finally, there’s a plot involving Jesse Eisenberg as a “young Woody in love” stand in who is forced to choose to slather his affections on his safe longtime girlfriend (Greta Gerwig) or her fascinating, flakey, manic actress friend (Ellen Page) who is visiting for a few weeks. He’s aided in the decision by Alec Baldwin who pops up as a conscience on Eisenberg’s shoulder as either an older version of the character looking back or a once spurned aging lover offering advice. Either way he walks in and out of the story in an inexplicably magic manner in a plot that is essentially a remake of Woody’s 2003 Jason Biggs vehicle Anything Else. That’s a lot of storylines to juggle and even though they play out intertwined, they never connect. This can feel a bit awkward since they are all on different timelines with some stories taking place over a few days and others lasing months. It probably would have made more sense for the movie to be a collection of shorts, but I guess Woody thinks he’s past that format now. With a cast that talented, they all obviously get a few decent scenes and former David Fincher cinematographer Darius Khondji ensures Rome looks gorgeous at all times. However, the postcard cinematography and collective star power just aren’t enough to distract from the fact that Allen wrote and directed his 43rd feature on autopilot.

A movie like To Rome with Love is as close to a vacation as the workaholic Woody allows himself to experience. The brand of literate broad comedy and neurotic romantic failure on display here has been covered in his past movies so many times that he can do it in his sleep. So every couple years, that’s exactly what Woody Allen does. He still practices his craft of framing pretty pictures and pushing a new crop of stars into his dialogue rhythms to find his latest batch of returning actors, but his laziness and/or indifference always shows. The results are pleasant, if predictable for any of the director’s fans, offering them exactly what they expect without the surprises needed to make a movie memorable. While Woody’s sleeping through a movie like this, we can only hope he’s dreaming of his next interesting movie and/or filing some throwaway ideas for the next feature-length snooze. You can’t really fault Allen for that at this point, he’s been doing it for decades. At least Woody on an off day can still charm and every now and then a Midnight in Paris, Vicky Christina Barcelona, or Whatever Works comes along to remind us that he’s still capable of soft comedy gems. To Rome with Love is mediocre Woody Allen, but at least it’s not boring Woody Allen. There will be plenty more disposable films like this in his career. He’ll keep making movies because he can and it’s always worth checking in. Like visiting an old friend, there’s comfort in hearing the old jokes that once made you laugh and if you keep coming back a few new ones will inevitably pop up to remind you of the glory days. Keep on truckin’ Woody. Let’s see what you’ve got next. I wonder if it will involve an uptight wiseacre of a guy and an eccentric lady who fascinates/frustrates him? Hmmmm…