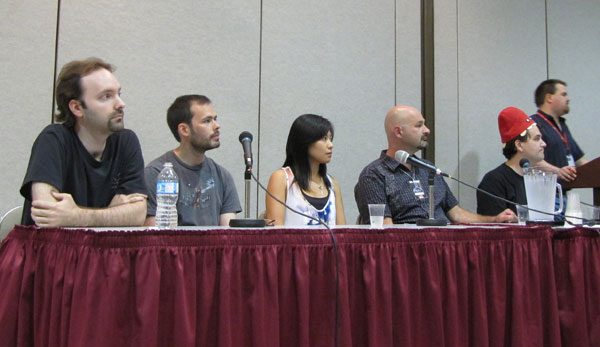 According to Dead Rising 2 producer and Capcom head of R&D Keiji Inafune, it very well may be. The legendary producer recently spoke with NowGamer and commented that Canada is “getting very important now…they’ve got potential to be at the epicenter of videogame development.” Inafune recently collaborated with Canadian studio Blue Castle Games on the […]
In this fourth podcast, Jeff tells us about the super important summer event that's been keeping him busy (is it X-Men Origins: Wolverine?), Will explains how Fallout is like Metal Gear, and Lucas drinks from the precious "I ♥ Jim" mug. The dorks talk about new TV shows, bemoan the shallow ethnic diversity in superhero troupes, and debate the state of computer gaming. Prepare to be informed, amused, and offended.
The fine folks at Borne Games, creators of the popular flash game World 2, have collaborated with Electronic Arts to create a 2D side-scrolling version of the free-running action game Mirror’s Edge. The game features all the same free-running acrobatics that made the 3D version so exhilarating to play, in a perfectly executed 2D format.  […]