Dragon Age: Redemption is the latest web-series from writer/actress/internet-wunderkind Felicia Day (The Guild, Dr. Horrible’s Sing-Along Blog). Set in the sprawling and epic fantasy universe of BioWare’s Dragon Age game series, last year’s 6-episode web-series has now been collected on DVD. But make no mistake: Dragon Age: Redemption is no mere web-based promotional tie-in. It is an ambitious project that pushes the boundaries of what can be accomplished in web-based filmmaking.

Now, for the disclaimer: I have never played a Dragon Age game in my life. I have heard great things though. Please don’t judge me.

The story of DA: Redemption centers on Saarebas (Doug Jones of Hellboy and Pan’s Labyrinth), a Qunari mage/grey giant who has been imprisoned by the rival Templars. When he escapes their prison, his former Qunari masters dispatch another of their minions: An elvish rogue named Tallis (Day). Her goal is to return Saarebas to his Qunari servitude – if successful, she will win her own freedom. Along the way she encounters new allies in her quest: A mysterious Templar named Cairn (Adam Rayner); Josmael, a free elf mage; and a mercenary reaver known only as Nyree. Though each has their own separate reasons for hunting Saaberas, it is their loyalties to each other, their faiths, and themselves will ultimately decide their fates.

First off, I had to admire the Herculean task that Day took on in creating this series. Bringing even a small corner of an epic fantasy universe to life on a web-series budget is no mean feat. This makes certain storytelling corner-cutting a bit easier to swallow, such as the densely detailed title cards which open each of the six installments. While these explanations of the Dragon Age’s caste system, specializations, and religions are not unfamiliar territory for any fan of fantasy, the complex names and terms present a steep learning curve. Fans of the DA games will likely have less trouble jumping right in, but I did find myself somewhat confused for the first 2 chapters.

Similarly, due to the financial restrictions of the series we often encounter a recurring case of “tell, don’t show”. Much of the characters’ back-stories (for example Tallis’ tale of the first time she disobeyed her masters on principle) plays like a dry and lengthy piece of exposition, as opposed to the gritty, character-building flashback that might have better suited it. This recurring theme, of characters stopping the action to explain dense world-building concepts to each other (and the viewer), is ultimately my biggest complaint with the series.

As far as web-series go, however, the production of DA: Redemption is top-notch. Web-content is notoriously difficult to fund (part of that whole “no-one’s figured out how to reliably make money off of it yet” thing), yet DA: Redemption manages to create a tight, engaging story while maximizing every dollar spent. The costumes, sets, minimal visual effects and locations are not quite Peter Jackson-grade, but they serve the story admirably. The acting is similarly solid, with Day’s enthusiasm for the source material clearly shining through in her performance. Given her usual niche of playing sweet or dorky characters, Day’s role as a badass elvish rogue assassin solidly demonstrates range that I can’t wait to see explored in future projects. Doug Jones also brings an air of detached menace to his role as Serrabus, who I would have liked to see perhaps more of. 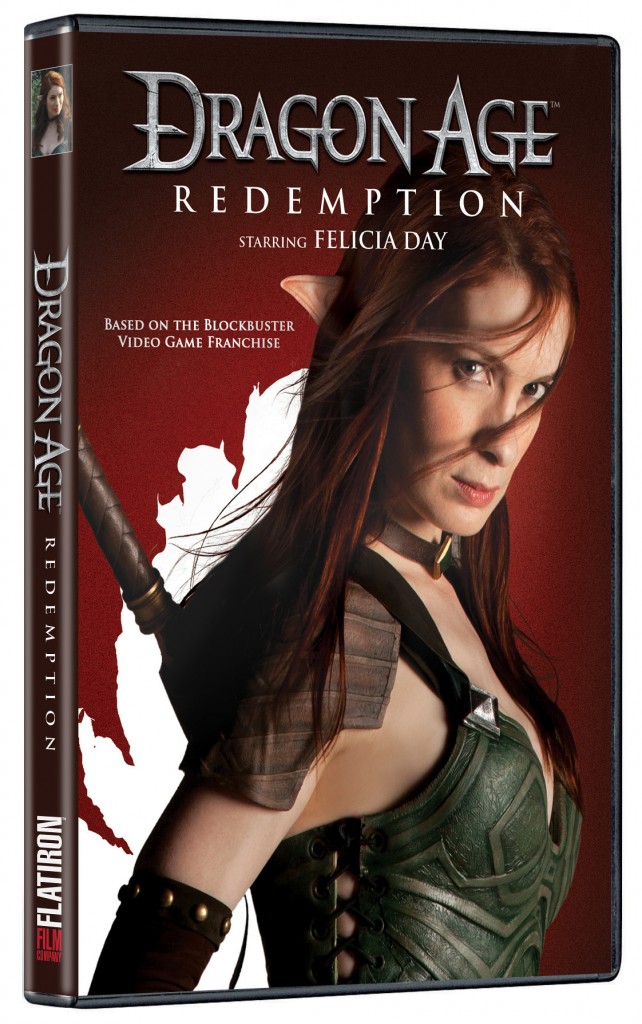 While the limitations of the form and adherence to the Dragon Age mythos are a stumbling block, the biggest compliment I can give Dragon Age: Redemption is that I would love to see a second series. Now that the heavy lifting has been done in terms of establishing the world on film, I would love to see Day given more freedom to explore the nooks and crannies of this universe. Finally, in perhaps the biggest nod to BioWare’s original intentions for this web-series, I want to go out and play the games now.

Dragon Age: Redemption is now available on DVD from Entertainment One.