Enter for a chance to win one of six pairs of run-of engagement passes to see All the Wrong Reasons, in theatres in Toronto, Montreal, and Vancouver on Friday, November 1st, courtesy of Dork Shelf and Myriad Pictures.

We sit down with the three male leads in the big screen adaptation of Cassandra Clare's The Mortal Instruments: City of Bones - Jamie Campbell Bower, Robert Sheehan, and Kevin Zegers - to talk about the hard work they’ve been putting in, their anxiety to do right by the material, how they first never even knew if anyone would be interested in them being a part of the franchise, and why the books and the film seem to resonate so strongly with teens and adults. 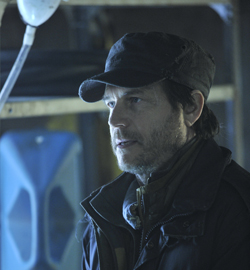 It’s not terribly original and it shows the signs of budgetary restrictions at many turns, but the Canadian post-apocalyptic action thriller The Colony certainly looks better and has a better cast and director than movies of this ilk usually have.

We talk to writer and director Jeff Renfroe and actor Kevin Zegers about their work on the post-Apocalyptic Canadian action thriller The Colony and what it's like to shoot such a cold looking movie in an abandoned NORAD bunker.