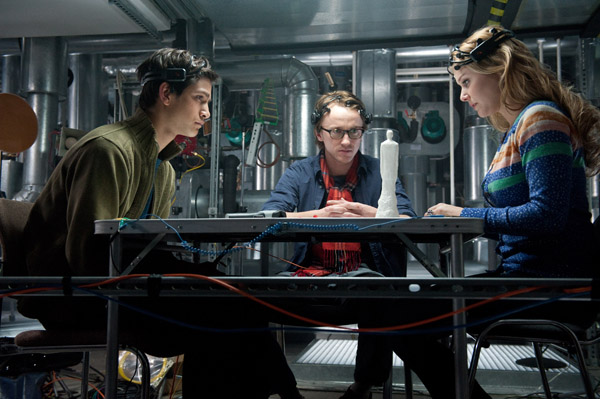 Many people complain that trailers give away too much these days, and while infamous instances like Prometheus have indeed been rough, none of them have can touch The Apparition. In two minutes and thirty seconds the marketing department managed to give away every single scare in the film and even told story more effectively the feature length version. Without exaggeration, this has to be one of the worst horror movies ever to be granted a theatrical release. A film with a plot so convoluted it has to be explained to the audience at least five times and a scare count so low that the poster actually gives away the final moment of the film because no other image was strong enough to sell the film. How this project got through the studio system in a time when iconic horror directors have to tour conventions instead of attending pitch meetings is a total mystery and a tragedy. It should be avoided by anyone other than insomniacs in search of an alternative to sleeping pills.

The movie opens with old 16mm footage of some sort of supernatural scientific experiment from the 70s. Why? Who knows? It’s never mentioned again other than as the inspiration for the next scene. A group of college scientists decide to recreate that experiment with fancy new technology in an attempt to attract someone or something from the afterlife. Led by Patrick (Tom Felton), the group attempts to bring an afterlife presence into the living world. Somehow it works (but dear God do not try to work out how from all the pseudo-scientific mumbo jumbo spat out by Felton) and the kids are attacked. The title appears and just when you’re about to get excited about seeing a ghostbustin’ spin on Flatliners, first time writer/director Todd Lincoln shifts focus to quite possibly the most boring couple ever captured on film in Ben (Sebastian Stan) and Kelly (Ashley Greene).

He works at an electronics company hooking up televisions. She looks pretty and wants a cactus for their new house. That’s about all you learn about the characters over the next 35 minutes as they wander around their home and discuss that something might be wrong. Eventually they figure out there’s a ghost following them. Ben admits that he was somehow part of the experiment from the start of the film and seeks out Patrick’s youngster mad scientist. Patrick explains that they awakened some evil spirit that’s trying to kill everyone involved to somehow cross over into the real word. It would be nice to know why or how, but apparently Lincoln decided his movie would be better served by long scenes of Ben and Kelly walking around looking vaguely displeased and endless monologues from Felton discussing his equipment. Fair enough, what’s the point of developing supernatural mythology or scares in a haunting movie, right? Eventually the spirit takes the form of a J-horror specter ten years too late to be frightening and all the characters die. Sorry to spoil it, but honestly who the fuck cares?

That fairly simple description of what the apparition in question might be is hardly difficult to grasp, yet Lincoln’s script dances around the issue so confusingly and pointlessly that a voiceover had to be added to the climax explaining what the hell is happening. A dead character reads this explanation that has no reason to be saying it. The last survivor has no means of hearing it. The speech is directed to an audience that desperate producers realized were too board and confused to comprehend the story by the last five minutes of the film. What’s even more irritating is the fact that the trailer explains that material simply and concisely in 30 seconds and even grafts on the conceit that if any person in the movie starts to believe in the haunting they, will die. That never actually comes up in the film. It was a gimmick that could have helped give some sort of purpose or structure to placid horror shenanigans, but sadly it seems like the WB marketing department were the first people to have the idea.

In addition to being an incompetent piece of storytelling, The Apparition features no scares that actually make an impact, and the few fleeting moments that at least seem like effective ideas have already been done in other movies. The acting from Greene and Stan in the lead roles is even more atrocious than anything the writer/director was responsible for. Granted they have zero characterization to work with, but this couple has no friends, hobbies, or interests other than talking about a house they could apparently afford to own on a part-time repairman’s salary. Felton proved to be a decent actor in the Harry Potter series, but here he’s stuck exclusively with scenes that require him to discuss fictional ghost-baiting electronics, and he appears to be completely lost while blathering on about nothing.

There’s honestly nothing positive to say about The Apparition other than the fact that it’s less than 80 minutes long and even then you can expect the longest 80 minutes of your life. There are no likable characters, effective scares, or moderately amusing performances, nor is there anything resembling a plot. The movie isn’t even so terrible that it provides joy through dismissive laughter. The most exciting moment onscreen is when the characters learn that, yes, Costco sells that cactus they are looking for. Save yourself the trouble and just drive to your local Costco to see if they are selling cacti instead of buying a ticket. The suspense of that ride as you wonder what you’ll find will be far more visceral than anything you could possibly experience in the theater.