Some actors spend months preparing for a role. They hire trainers, change their diets, and work with dialogue coaches to help them fully embody their character once the camera rolls. But on occasion, a role comes along meant for only one actor. A role that one person was born to play. In Harmony Korine’s The Beach Bum, jovial Hollywood leading-man Matthew McConaughey plays the jovial Florida layabout Moondog. And the role fits McConaughey’s personality and acting skill-set like a finely tailored suit.

Close your eyes and imagine what a tequila-drenched, sun-baked, stoned-out-his-mind Matthew McConaughey performance looks like, and that’s what The Beach Bum delivers. And then some. But within Moondog’s foggy cloud of weed smoke, Korine stashes away an earnest message. That’s assuming you get past the indulgent performance, woozy pacing, and drug-fueled debauchery.

Laidback doesn’t begin to describe Moondog, a man whose only commitment is to a life of leisure. He spends his days and nights gallivanting around the Florida Keys; often with a can of Pabst Blue Ribbon in hand, and a joint planted loosely between his lips. He moves through life with no greater ambition than keeping a silly grin plastered on his face. The Beach Bum follows Moondog as he shambles through South Florida in search of life’s next adventure; usually getting drunk, high, and laid. Often all at the same time. 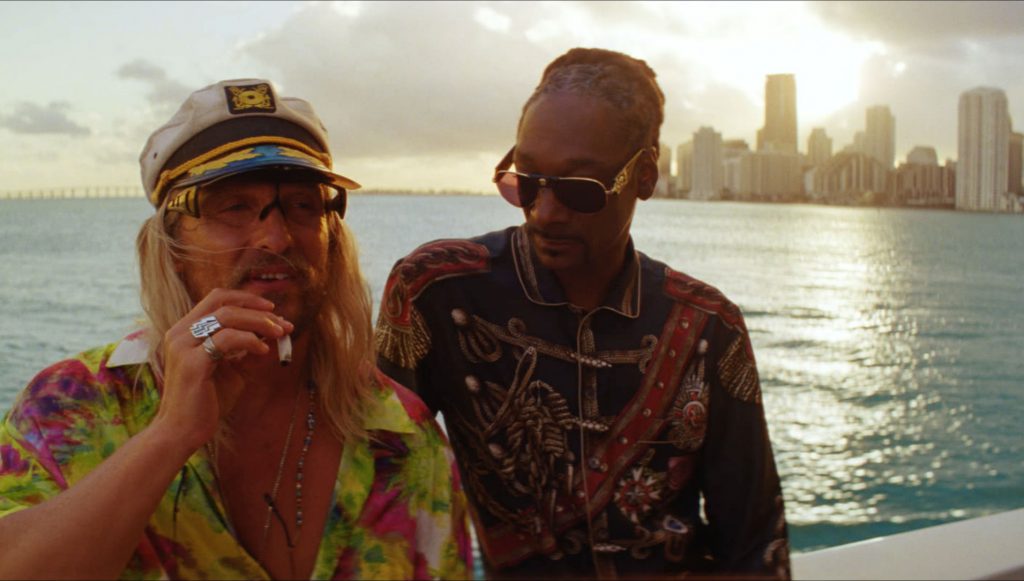 Much like The Beach Bum’s intoxicated hero, the film’s “plot” shuffles along at a relaxed pace. In other words, shit happens, but barely. Moondog is a renowned poet, a lover of women, and a staple at the local bar scene. His wife Minnie (Isla Fisher) is crazy-rich, but you wouldn’t know it by looking at Moondog, who looks and acts like he crawled out of a Salvation Army shelter. When tragedy pushes Moondog outside of his comfort zone, he finds himself legally bound to change his freewheeling ways.

Korine’s offbeat film plays out in what feels like a series of vignettes. They centre around Moondog floating through life and running into eccentric people. The movie features a wired-up supporting cast of characters who go big with their performances. Snoop Dogg plays a character named Lingerie, which is all you need to know.

Jonah Hill and Zac Efron ham it up (in the best possible ways), but it’s Martin Lawrence’s Captain Wack who steals the show. Their “turnt up” personalities fuel a series of over-the-top comedy bits. We’re talking about a movie that features a parrot doing a line of coke. This motley crew of Floridians feel less like human beings than living, breathing Muppets.

Despite McConaughey’s unmistakable charisma, his Moondog schtick gets old, fast. Most of the cast of this film is obnoxious. The difference is we only sit with them for short bursts. Hill seems to be channelling an Adam Sandler impression of a southerner. And I’m convinced Efron’s douchey bro, Flicker, is a sociopath. These characters leave strong impressions, and their comedic romps are hilarious at first, but one dimensional. Korine reigns all his characters in right before they become obnoxious, except for Moondog.

95-minutes is all the time I could bear to stick around in Moondog’s world. But I’m fascinated by what Korine says through his deployment of these characters. He paints a portrait of American life we don’t see enough in mainstream movies. Korine explores the world through the eyes of a blissful drifter. The man is an obvious mess, and he causes chaos in the lives of people around him. But they accept him unconditionally.

Moondog shows up late to his daughter’s wedding, sends a wheelchair-bound guest hurling into a wall, and humiliates the groom. But that’s Moondog being Moondog. Being inappropriate is stitched into the fabric of his being. But people accept him because he loves unconditionally, and he (usually) means no harm.

Moondog doesn’t use booze, sex, and drugs to numb himself. Partying day and night isn’t a distraction from life’s ills. He isn’t running from trauma in his past, he’s chasing his bliss. This man discovered joy, meaning, and purpose, and commits to life’s pleasures like a hedonistic ninja. He found life’s sweet spot and only wants to roll up in it 24/7. And Moondog’s appeal is that he loves bringing others along for the sweet, sweet ride.

The Beach Bum doesn’t take you on an emotional journey. By showing us Moondog’s unconventional life, Korine asks viewers to contemplate their own. We’re conditioned to believe that ambition leads us down the road to happiness. We’re conditioned to work hard, earn money, and buy things to make us happy and impress the people around us. But The Beach Bum shows us that there is another type of ambition; the ambition to be kind to others, to be generous, and to live your ideal life on your own terms.

Is Moondog living his best life? It’s not for us to say. But he is without a doubt living life to the fullest. Even if you don’t like Moondog, you may appreciate his ideology. He found his bliss, took it by the reigns, and rode it to the promised land.