If on passing glance viewers thought 2013 was a particularly weak year for Canadian cinema, they wouldn’t be too far off. A great deal of 2013’s weakness in this respect is really just because most of the best films of the year are being sat on for releases in 2014 instead of the year they were produced. Thanks to the holdovers, however, 2014 shapes up to be a positively banner year for our national cinema, as TIFF kicks off what’s easily its best year of programming its Canada’s Top Ten series to date. From Friday, January 3rd through Sunday, January 12th, viewers can get a look at some of the best films produced within not only Canada, but some of the best produced in the world. And since only three of the ten films in this year’s line-up have seen major release (with the exception of a few that played in Quebec already), you can still say you saw them before everyone else if you missed them at TIFF this past year (where all but one played).

Take for example the series starter: Michael Dowse’s heartfelt, hilarious, and exceptionally charming romantic comedy The F Word (due for proper theatrical release sometime this summer). While on the surface this meet-cute comedy with Daniel Radcliffe and Zoe Kazan as friends who can’t acknowledge the romantic tension between them looks like something straight out of the Hollywood playbook, but it’s a lot more perceptive and realistic than a simple synopsis might suggest. Beloved Canadian filmmaker Dowse and screenwriter Elan Mastai have created a rich, thoughtful, and purposefully problematic romance that hasn’t really been attempted or nailed this well since When Harry Met Sally. And given the cast and talent behind it, it’s all but assured to be the highest grossing Canadian film of 2014.

Just as ambitious and genre defying is Xavier Dolan’s unnerving and skillfully crafted psychological drama Tom at the Farm. What starts off as the story of a young man (played by a decidedly unglamorous looking Dolan) trying to connect to the family is his deceased, closeted former lover becomes an intense look at how the family’s secrets are beginning to be revealed to this outside in less than healthy ways. Undoubtedly his most straightforward work to date, Tom at the Farm’s no bullshit and no filler storyline allow the gifted young director to shine in ways that he hasn’t in the past. It was one of the best and definitely the most thoughtful thrillers I saw in the past year.

Another equally ingenious, but decidedly more absurdist, surrealist, and humorous thriller is Denis Villeneuve’s other partnership with actor Jake Gyllenhaal, Enemy. Adapted from a 2002 novel from Spanish author Jose Saramago, Gyllenhaal plays a married and fairly bland Scarborough based university professor who becomes unhealthily obsessed upon realizing he has a doppelganger living in Mississauga, an aloof bit part actor with a pregnant wife of his own. Making exceptional use of Toronto’s suburban blight, Villeneuve has a lot of fun pulling the rug out from beneath the audience at every turn, and Gyllenhaal delivers some of his best work in not one, but two very difficult roles to play.

Also still waiting for release, but coming out in the very near future, and playing into that same theme was Canada’s entry for this year’s Best Foreign Film Oscar, Gabrielle. This story of a young woman with a developmental disability struggling for independence and more importantly a chance at true love boasts a wonderfully brave leading performance from Gabrielle Marion-Rivard (who has Williams Syndrome in real life), and director Louise Archambault never shies away from the deeply personal conflicts and prejudices between her characters, especially between Gabby and her supportive, but soon to be leaving sister.

Perhaps the most underrated and under-the-radar film of the bunch is the debut feature from Chloe Robichaud, Sarah Prefers to Run. Sophie Desmarais coveys youthful awkwardness and sexual naiveté beautifully as a high school track star struggling to find out who she is in university. Favouring sly humor and sometimes painfully realistic emotional foibles over dramatic bombast, Robichaud crafts a coming of age story that’s imminently relatable despite her protagonists sometimes tunnel-vision looking personal goals.

We’ve already talked quite extensively on here about the tripped out animated road comedy Asphalt Watches (which is still awaiting distribution), Alan Zweig’s personal look back on When Jews Were Funny, Denis Cote’s Vic et Flo ont vu un ors, and Jennifer Baichwal and Edward Burtysky’s stunning documentary Watermark, but there’s still one feature left in the series that I have yet to catch: Jeff Barnaby’s heavily buzzed about debut feature Rhymes for Young Ghouls. Blending family drama, a revenge thriller, and a hefty message about the plight of First Nations people, the film sees release in Canada at the end of the month, but I’ll be sure to check it out well before that. 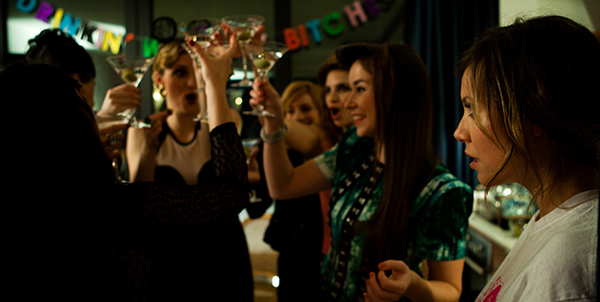 But despite the higher profile that the features are certain to get, it also can’t be understated how great the short film selection is this year. Anchored by Walter Woodman and Patrick Cederberg’s award winning and inventively mounted look at young love in the digital age, Noah, these are some of the most ambitious Canadian shorts in recent memory. Monia Chokri’s An Extraordinary Person is a hilarious and gleefully misanthropic look at a bachelorette party that goes rapidly south when one extremely hungover and frustrated guest decides to speak her mind. Johnny Ma’s A Grand Canal is a mournful reflection of one man trying to find solace and closure surrounding his less than ideal life as a shipping captain. Nicolas Levesque’s haunting documentary In Guns We Trust is made up almost entirely of still photographs as the residents of Kenesaw, Georgia talk about their community’s law that requires all residents to own firearms. Kevan Funk’s cerebral, humane, sad, and sure to stick with you Yellowhead follows a safety inspector on his journey around the bleak and dangerous factories and refineries in Western Canada. Fantavious Fritz’s darkly whimsical Paradise Falls puts a new spin on the term “suspended adolescence.” Stephan Moukarzel’s Nous avions is a thoughtful portrait of a fracturing family that’s trying very hard to capture an actual portrait just outside of a Montreal airport. A trio of animated features (the sweet noir of Claire Blanchet’s The End of Pinky and the silly insanity of Chris Landreth’s Subconscious Password and Fraser Munden and Neil Rathbone’s incredibly true story The Chaperone) round out a program that could easily stand alongside the features in terms of greatness and entertainment value.

There are also a pair of In Conversation talks this year: one with Villeneuve and Gyllenhaal about Enemy on Sunday the 5th at 3:30pm and one with recently freed Canadian filmmaker John Greyson about making politically charged films on Sunday the 12th at 3:30pm. Both are sure to be sell outs, but for those looking for a broader look at Canadian cinema there’s a free panel discussion about what defines a film as Canadian on Friday, January 10th at 11am. There’s also a surprisingly affordable cocktail party on Wednesday the 8th at 7:00pm at the Lightbox that’s open to the public ($15 for TIFF members, $20 for the public) that includes a look at an exclusive installation in Cinema 5 from Asphalt Watches directors Shayne Ehman and Seth Scriver. And with tickets for films and the shorts programme at a reduced rate of $10 and absolutely nothing of new of interest at the multiplex other than holiday holdovers, you really have no excuse to not go unless you don’t live in or around Toronto.