Benedict Cumberbatch carries the day in a role that feels almost custom made for the sort of droll loner act he has been perfecting across his past several films and his hit TV series, Sherlock. Only this time, he’s certain to get some award season buzz because he’s playing noted cryptologist, mathematician, and inventor of the modern computer Alan Turing. And while he’s great and the film does justice to someone who was gravely mistreated by his own government, one wishes there was more that the rest of the cast could do instead of simply reacting to the main character.

Focusing primarily on Turing being brought in to crack the code behind the brilliantly designed German Enigma Machine during the Second World War, director Morton Tyldum (Headhunters) delivers a stately looking, no frills character study about how Turing wasn’t much of a team player and how he remained a closeted homosexual during his entire run with the British military. 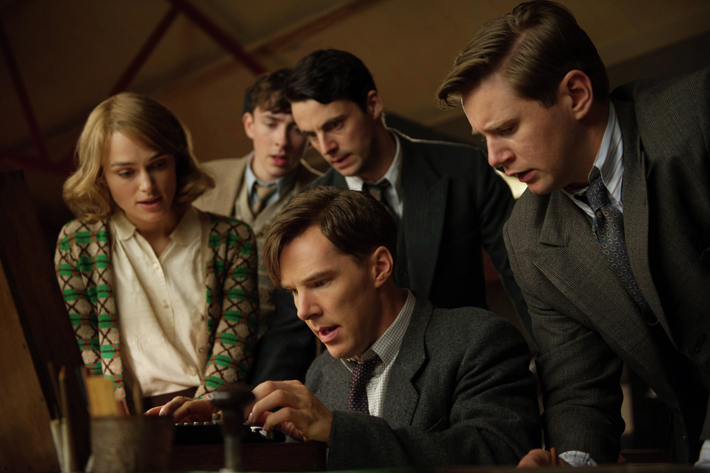 Cumberbatch gets handed the starring role of a lifetime for him, and he runs with it very admirably. His Turing has a great inner turmoil that manifests itself through being overly confident. He has the uncanny ability to solve problems, but to also take everything so personally that he shuts down when confronted to unhealthy degrees. His fiery temperament masks an innate desire to be taken seriously. He’s the by-product of a system that won’t allow him to be himself. This comes together wonderfully in the final third when Turing’s homosexuality takes centre stage. The film before the climax is an intriguing historical period piece. When Cumberbatch finally allows Turing to show vulnerability and emotional depth, the film becomes a powerhouse.

The focus on Turing not playing nicely with others is great for Cumberbatch, but not so great for his co-stars. If the film had spent more time with Turing’s actual personality, that could be excused a bit more, but the team effort to crack the Enigma that takes up the first two thirds of the picture gets lost at times. Matthew Goode and Kiera Knightley appear as fellow members of the intelligence squad (with the latter at one point agreeing to be Turing’s beard), but Goode in particular has very little to do outside of scenes that establish their characters. Knightley, however, makes the most of a role that’s weak on paper, but strong on screen. She’s bringing a lot to the table here. Of the supporters only Mark Strong (as Turing’s contact in MI:6) gets a chance to break away from the film’s stringent focus.

Still, Turing is an interesting enough historical figure, and the film does right by him.