The Knick Episode 2.4 Recap - That Shelf Skip to main content

If you show a loaded gun in the first act, it’s probably going to go off before the final curtain. The old rule of suspense, termed “Chekhov’s gun” in honour of the famous Russian playwright, is a well worn principle in dramatic storytelling, and when it’s executed correctly, it can work wonders. Now, the guns aren’t always guns, and people don’t always die when they go off, but the release of tension when a piece of foreshadowing meets its implied outcome is cathartic, if not surprising anymore thanks to our familiarity with the device.

Two Chekhov’s guns discharge in The Knick’s fourth episode of the season, titled “Wonderful Surprises.” Each was established earlier in the season, initiating a multiple episode buildup of tension which, once released, elicited either shocked laughter or tears from me. I am writing, of course, about the surprise immolation of the fatally incompetent Dr. Mays (the laughter) and the successful use of the fever cabinet (the tears).

Dr. Mays’ death in the operating theatre is one of my favorite moments in a season that has so far been filled with excellence. He was shown in the past three episodes to be egregiously unqualified and, even when he was first mentioned as being appointed as a surgeon in the premier, it was clear that someone was going to die under his watch. What I didn’t expect is that he would be the first soul to succumb to his own bumbling medical practice.

Mays is performing throat surgery, assisted only by a single nurse, when it happens. The scene is perfectly constructed to make his death a punchline, filled with little ironies and underscored with the operating theatre’s omnipresent dripping noise, made in this instance to sound just like a clock ticking down the final moments of life. After feeling nostalgic about the old days of medicine when you had to rely on your wits, and promising a long future for himself and his nurse, Mays brings a cauterizing tool into the patient’s either-fogged neck cavity.

The scene ends with Mays’ face burning off while he screams away his final breaths. The whole ordeal is horrific on paper, but hilarious on the screen. The idiot surgeon was a legitimately dangerous man. I was majorly squigged when he made the wrong incision in his patient’s trachea – this man is charged with opening and rearranging bodies; “Oops” should not be a part of his vocabulary. The relief in the fact that this horrible force of misfortune named Dr. Mays will no longer be cutting open New Yorkers was enough to make his pained wailing a comical victory.

Balancing horror with humour is no easy feat, especially in a period drama like The Knick, but it worked in the immolation scene and it’s indicative of the quality of the show as a whole. With the odd exception of True Detective, I am not a fan of the long running trend in media to keep our dramas dark and our comedies unserious. The mark of a well told story is in its ability to balance opposite emotions such as those in Dr. Mays’s final performance. Sure, it’s dark, but it’s also funny.

When the second gun in the episode goes off, a different balance is struck. The fever cabinet was introduced in the second episode of this season when Dr. Algernon Edwards showed it off to the new and sober Thackery, who quickly dismissed the device as too expensive for the single use it was serving. When Abigail Alford’s malaria treatment isn’t raising her internal temperature high enough to kill her syphilis, and it looks like she may infact die from the strange disease versus disease treatment Thack has cooked up, he puts a hold on Dr. Edwards’ emergency quinine injection and tosses Abigail into the flaming fever machine.

The last minute trip to the oven is a satisfying button on the question, “What’s gonna happen with that cool ass fever cabinet?” But the artful juxtaposition I’m praising comes with the results. The final scene of the episode begins in a dream. Thackery is on a boat, sailing it into the open ocean, and he looks over to his companion, Abigail, who has a face unmolested by the deforming symptoms of syphilis. She smiles. He wakes up as his name is being called from the bed he’s sleeping next to. It’s Abigail, alive and ostensibly cured, but not without the lasting scars of her invisible enemy. Thack crawls onto the bed, kissess her forehead and embraces her.

Thack’s dream, compared to his waking life, hits that special balance between relief and regret. The idea that he succeeded is triumphant, but there is a tender melancholy hanging over the proceedings. Abigail is alive, and she is potentially cured, but her hellish struggle with syphilis will always be painted on her face.

Now that we’ve got those two big set pieces out of the way, I want to talk about my favourite scene in the episode: Opal and Algernon Edwards’ date night in Harlem. Last week, when Opal was introduced, it seemed to come out of left field in a way that I’m not sure benefitted her or the episode. The best entries of The Knick end on a thematic downbeat, leaving you with a compelling answer instead of a question. That was not the case with Opal, who was a living, breathing questionmark for audiences to have to ponder until “Wonderful Surprises.”

It turns out that Opal is a fantastic addition to the cast, running counter to Algernon’s angry acceptance of systemic racial injustice with her own righteous progressiveness. Initially, during the first scene in Algernon’s apartment and then a lunch scene at the Roberts house, Opal is framed as an antagonist with the right ideas. She calls out Algernon’s complacence with “the way things are done” and takes the Robertses to task on their treatment of his parents. The conflict is difficult because it challenges the show’s established track for Algernon, fucking up his shit, while also positioning Opal as the most enlightened character in the show’s progressive paradigm.

When Algernon takes Opal uptown to a bar in Harlem, the tension between the two is ironed out in a style-breaking scene that simply radiates delight. The Edwardses’ date is portrayed through alternating shots of them dancing and drinking, while their unbroken single conversation connects each frame immediately and linearly. By the end of the scene, it’s clear why Opal and Algernon love each other, and I was left with the impression that I watched what their memory of that night must have been like.

Feel The Heat (But Don’t See It) 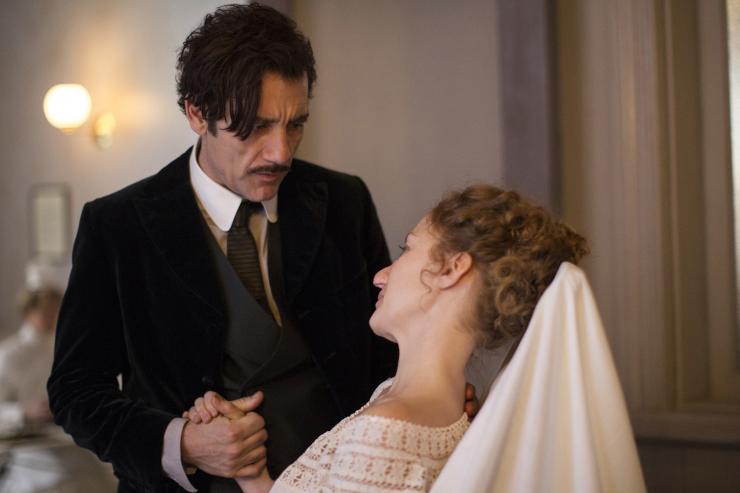 While the three aforementioned bits were the highlights of “Wonderful Surprises” – ushering out a hated character, welcoming in a new face and hitting me right in the fever cabinet feels – the whole episode continued to underline the ongoing theme of invisible evils. Once again, we are seeing our characters coming into conflict with enemies they cannot see, but are still terribly powerful forces in their lives.

Syphilis, ignorance and privilege are mentioned above, but “Wonderful Surprises” also sets to illustrating conflicts around religious guilt, the disease of addiction and even the nascent eugenics movement.

Sister Harriet has the court case against her dismissed after Tom Cleary blackmails the women whose pregnancies the nun aborted into using social influence to sway the puritanical judge. When Cleary is driving her away from the courthouse, he offers to have her stay at his place as a roommate, but she rejects him in service to The Lord’s will. Instead she goes to a woman’s shelter and is bullied by her hateful and begrudging sisters of the cloth.

Thack, when he’s not using fever machines to cured STIs, is collecting living addicts for study. He has disected numerous corpses looking for any internal sign of addiction, but beyond liver scarring he can’t find a thing – even in Mays’ body, and that man was most definitely an alcoholic, there were no anomalies. The invisible disease of addiction has turned Thackery to the human brain, a veritable box of human secrets.

Everett Gallinger also encounters an invisible force of evil this week. Or, more accurately, re-encounters it with greater clarity. The racist doctor, stoked by rage after a little beggar boy named Paulo spooks his mentally unstable wife, is getting swept up in the eugenics movement. The politics of Gallinger and his supremacist friend are focused on controlling the invisible hand of natural selection in order to eradicate cultural others. It’s a horrific concept, obviously, and one that brings me back to the idea of Chekhov’s gun.

Gallinger’s friend wants the eugenics movement to achieve political power. He leads Everett to the conclusion that the solution to their immigrant troubles is mass sterilization. Effectively, he suggests genocide. And while other shows set in the future dangle this grand evil above a story in order to heighten stakes, this is a rare occasion in which we, the audience, understand exactly how that loaded gun fires. Gallinger might not be beyond all redemption this point, but the ideas he is entertaining do come to fruition in one of the world’s greatest tragedies.

It’s this context of the invisible loaded guns that surround us at all times, waiting to go off, that helps make the final scene between Thackery and Abigail so heavy. There are things we can’t see acting on us. We only notice them once they’ve begun to do damage. And while we can do everything in our amazing human power to mitigate the effects and develop cures, nothing can ever erase the scars of the past from the face of the present.

Delicious Quinine – You might recognize the name of the drug the doctors inject Abigail with to treat her induced malaria. Quinine, a popular antimalarial, is a common ingredient in tonic water.

Batcave – Cleary had a lot of excellent lines in this episode, but I think my favourite has to be when he tells the gathered society ladies, “I doubt you was letting penniless shine boys put the bat in the cave.”

Personification Makes It Happen – There’s something I find really endearing about Thackery calling the spirochete on his microscope slide a son of a bitch.  I think one of the reasons Thack is so lovable despite his shortcomings is how personal each of his struggles is.

The Bert Cage – Why do I get the feeling that if Bertie was still at the Knickerbocker he would be given time to research a treatment for his mom’s esophageal mass? Another loaded gun, for sure, but the question is whether Bertie will leave Mt. Sinai before his mother dies or after.

Tameny Trouble – A great insight into the world of Henry Barrow: he’s skimmed $12,000 through his corrupt ways, an amount so little it makes his current extortionists at Tameny laugh.

The Invention of the Sex Tape – It was only a matter of time before that damn early adopting Robertson kid invented moving pornograhy with that futuristic camera of his.

Next Article »
Win Self/less on Blu-ray