Arguably the final 2D animation masterpiece produced by the Disney machine before the company ditched pencils and paint for keyboards, The Lion King remains an extraordinary achievement for the company. The opening ‘Circle Of Life’ sequence alone remains one of the most beautifully detailed and executed pieces of hand-drawn animation ever projected in a movie theater. It’s a gorgeous flurry of color, music, and emotion, communicating big themes and bigger emotions silently in ways that anyone can understand without pandering. The film that follows is less radical, more of a goofy romp and moving tale of “discovering your true self” that has been a staple of almost every animated film to follow.

That’s not to say that The Lion King is a single glorious bit of animated art followed dull Disney clichés. Far from it, the film works magically. The laughs still deliver and the drama still stings. Celebrity voice acting and anthropomorphized animals mingle perfectly in ways most animated movies merely phone in. The dramatic peaks still linger in ways that traumatized 90s kids unprepared for where the movie goes. The mixture of Elton John pop ballads and gut-punch Hans Zimmer orchestrations balance each other in ways that shouldn’t be possible. The Lion King is operatic and poppy fun, a platonic ideal of everything that Disney strove to achieve circa 1994. A film with tear-pulling drama, immensely hummable songs, and even a few good fart jokes.

The fact that The Lion King doesn’t feel dated after 23 years is a surprise. The animation is still wondrous, even in an age of digital gloss. The set pieces are painterly perfect and the characterizations eccentrically personal. The film probably wouldn’t look better or resonate deeper in CGI, but that theory will be tested soon enough in Disney’s quest to remake all of their animated classics in “live action.” That’s likely why this Blu-ray disc even exists in the first place. It’s a re-introduction to the Disney masterpiece for kids to get butts in seats for the unnecessary reboot currently in production. Sigh…oh well…at least the original Lion King still delivers the goods and is once again available in HD perfection. 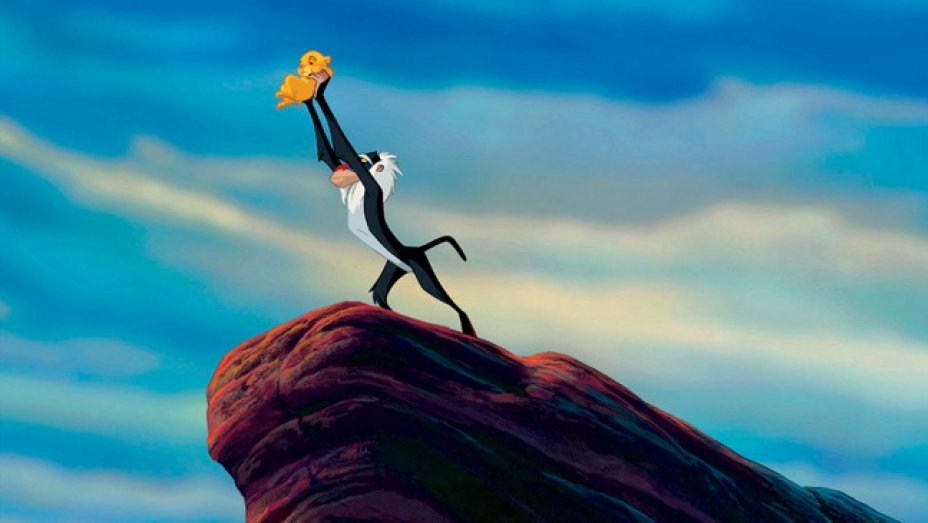 There’s no need to mince words, The Lion King is an absolute wonder to behold in HD. The colors glow off the screen with hypnotic vibrancy. The hand painted frames are so meticulously detailed that they hold up to freeze frame scrutiny. It’s a magical massage for your television screen and the lossless sound mix is potent enough to rattle any sound system. The Hans Zimmer score blasts through speakers in a way the stings the gut, while quiet moments come with just as many layers of immersion. This was an animated film designed to match the boisterous 90s blockbuster era and still plays as an audio/visual feast to this day. It’s only now that home theaters are powerful enough to recreate the remarkable Lion King theatrical experience and that’s a damn good thing.

Admittedly, The Lion King has already hit Blu-ray before. So as stunning as the disc is on a technical level, that’s nothing new. What is new are a handful of new special features. There’s an amusing feature that shows never-before-seen recording session videos used as animation references. Over five minutes, a montage of classic movie scenes plays alongside grainy video of everyone from James Earl Jones, Matthew Broderick, and Jeremy Irons, to Whoopi Goldberg, Nathan Lane, and Jonathan Taylor Thomas (remember him?!) recording the voices. It’s an amusing lark for those who enjoy such things. There’s also a bizarre 3-minute interpretive dance and painting of Scar set to his big song in the film that’s an equally fascinating and inexplicable inclusion. And if you like to sing-along to Disney songs, good news! There’s a version of the film with bouncing onscreen lyrics to make that dream possible.

But wait! There’s more. Animation buffs are treated 23-minute documentary showing story artists pitching the initial painted boards for a handful of major set pieces in the film. It’s actually rather fascinating to see the small team of artists and directors break down the visual motivations behind every shot in the scenes and how close the final film kept to those pitches. It’s a wonderful insight to how the Disney machine used to work, along with some memories from directors Roger Allers and Rob Minkoff recorded recently to tie the footage together. Next up, Matthew Broderick and Nathan Lane also sit down for a surprisingly brief 7-minute chat about their involvement in the process for anyone excited to see celebrities vaguely recall 20-year-old recording booth anecdotes.

Returning from previous releases are a 3-minute reel of recording booth outtakes rendered in full animation that’s kind of cute, an animated version of a song added to the Broadway Lion King musical, a few animatics of deleted scenes, and an audio commentary from the co-directors. Unfortunately, none of the three hours of docs and features from the previous Blu-ray are on the disc, but they can all be downloaded alongside the film with a digital code, which is a nice touch. Toss in a few 35 mm film frames (my copy included Simba being lifted to the heavens, which is pretty great) and you’ve got a very pleasing package of a stone cold animated classic.

This new release probably isn’t worth picking up for anyone who bought the last Blu-ray, but the new special features are surprisingly fun and the fact that all the old features are technically available with a purchase makes this the definitive HD edition of The Lion King for anyone who doesn’t own it already. Act accordingly.