To celebrate TIFF’s ongoing Bangkok Dangerous: The Cinema Of Nicolas Cage series, Alan Jones has resurrected his retrospective of the actor’s work entitled The Nic Cage Project. In this edition, Jones takes a look at the Coen brothers’ Raising Arizona – playing tonight at the Lightbox. 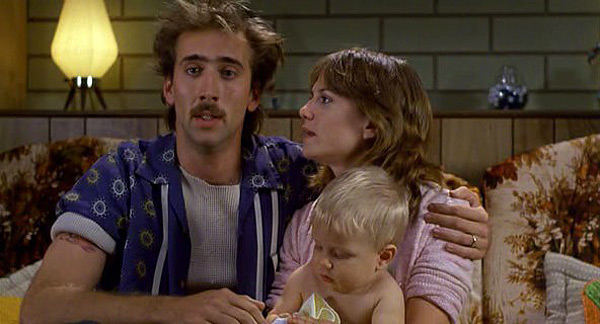 In Raising Arizona, a southern-fried comedy about family (along with other things held dear by social conservatives, like monogamy, prison, the manufacturing industry, store clerks with big guns, and unpainted furniture), we have a Nic Cage performance in which his character, H.I. McDunnough, may fairly be criticized for the decisions he makes. The first thing we learn about him is that he robs convenience stores. “Fair enough,” you may say, “some men and women can be driven to crime in extreme situations.” But for H.I., or “Hi” as his friends call him, robbing convenience stores seems to be a form of stress relief. Things not working out in the real world? Hold up a convenience store (seemingly the same one as before, which you will know by the third botched robbery attempt has an alarm system), go back to prison, make some friends, and get some free therapy. In another instance of questionable behaviour, when his plant foreman asks him, innocently enough, to swap wives for a night, he gets very angry and breaks the poor fellow’s nose.

Perhaps worst of all his decisions is Hi McDunnough’s decision to steal a baby boy, Nathan Arizona Jr. and proceed to expose it to his fugitive acquaintenances against the wishes of his wife (Holly Hunter). He also doesn’t seem particularly concerned with the baby’s well-being, financial or health-related: he doesn’t find it a pediatrician, he doesn’t get himself insured in case of an accident (even after his wife, Ed McDunnough, gave up her career as a law enforcement officer), and he really doesn’t seem bothered about saving up for the baby’s post-secondary education. If he did, he probably wouldn’t have assaulted his foreman and lost his job. But Hi is more than the sum of these unfortunate decisions. Thanks to the sympathetic performance of Nic Cage, we see the humanity in H.I. McDunnough. We see his flaws, of course, but we also see that he’s really a good man who loves his wife, but still makes mistakes. Still, when he has the new responsibility of a baby boy to introduce to the world, and he decides to unwind by stealing a pack of Huggies. It does makes one wonder, but I digress. 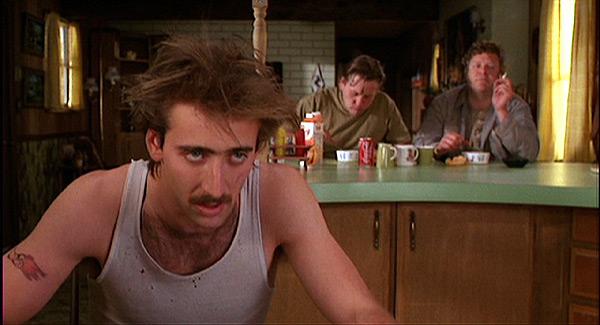 You see, Hi didn’t steal a baby for malicious reasons. Or maybe he did, because his wife wanted one, but that’s only because she found herself out to be unable to have children, and the adoption agencies won’t touch a man with Hi’s criminal past. Besides, the baby was one of five quintuplets, his parents had four more to care for, and Hi just really wanted to make his poor wife Edwina happy. Haven’t we all made mistakes? And who’s to say jail isn’t a bad idea for those without a plan in life? Simply perform an unarmed robbery, and you can be housed and fed and psychoanalyzed. For some, that may not be such a bad idea after all. As Hi himself points out, his post-jail career of drilling holes into metal sheets is a lot like jail itself.

Raising Arizona may even contain within it Nic Cage’s sweetest performance – not sweet like a hard candy, or a pair of trendy sneakers, but sweet like when that lion was raised by that gay couple in London, and then they let it back into the wild, but then they found it again and the lion was all happy and licked their faces, like “aww, isn’t that sweet!” And this wonderful performance is contained by a sharp screenplay by Joel and Ethan Coen (one of whom may or may not have also written the Bill Murray Garfield movie) that never denies its uneducated cast of convicts their cinematic right to speak in a hyper-articulate and, dare I say it, literary manner. For Cage, it is the performance of a lifetime, which is not surprising, because he’s had about 50 of those.