A common cinematic stereotype in the portrayal of Asperger Syndrome is that the individual is inherently odd. It is used as a catch-all for traits and behaviours that are not even specific to people on the autism spectrum. Take the voyeurism that Bart (Tye Sheridan), the protagonist of Michael Cristofer’s The Night Clerk partakes in, for example. In any other film, a young man planting numerous hidden cameras around his place of work would be a catalyst for serious ethical discussion. However, in Cristofer’s thriller, it is simply chalked up to Asperger’s.

It is why this creepy endeavour is treated as one of Bart’s quirks, though “obsession” feels like a more apt word. A night shift clerk who has Asperger’s, Bart spends free time on the job secretly watching hotel patrons on his laptop. When not at work, he heads to his mother’s basement where he continues watching live streams and recorded footage on his multiple monitors.

Everything from the salacious to the mundane is poured over with great attention to detail. Every pause and cadence mimicked to the point where Bart is having full conversations with the monitors. He is far more comfortable interacting with the screen than he is with his own mother, Ethel (Helen Hunt). A protective enabler of her son, Ethel is not even allowed to eat dinner with her son. She merely leaves his food on the stairs and then assumes her spot at the dinner table so they can dine through screens. 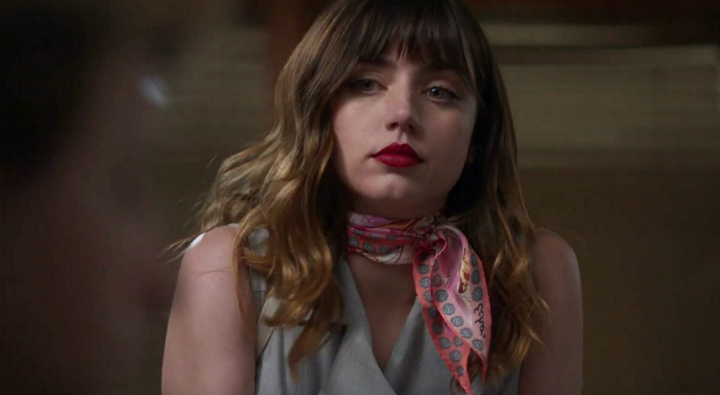 In a perverse way, the monitors provide the socially awkward Bart with a safety blanket to cloak himself in. That is until he witnesses a seemingly intimate moment between a female patron and a male companion get violent. Racing back to the hotel to intervene, Bart becomes a suspect when the woman is found dead. Did Bart commit the crime? To be honest, the only one who seems remotely interested in solving the mystery surrounding the woman’s death is Detective Johnny Espada (John Leguizamo).

Believing that there is more to Bart’s version of events than he is letting on, Det. Espada is not content with buying the narrative that the 23-year-old clerk is as pure as others believe he is. Unfortunately for Espada and the audience, The Night Clerk treats the central mystery as an afterthought once Bart meets Andrea (Knives Out’s Ana de Armas), a guest who is unphased by his awkwardness.

Andrea has personal experience with individuals on the spectrum, and Cristofer uses the budding friendship between her and Bart to explore the young man’s desire for a real relationship. In fact, the notion of a potential future with Andrea seems to be just the medicine Bart needs to be more engaged in real life. While there are some charming moments between Bart and Andrea, their arc feels at odds with the murder mystery that the film revolves around.

The disjointed nature of The Night Clerk is especially evident when observing how thinly written the supporting characters are. Everyone outside of Bart and Andrea is rather one-dimensional. Leguizamo and Hunt are absolutely wasted in the film as they spend large swaths of the movie on the sidelines. Even de Armas, who gives arguably the best performance in the picture, can only swim against Cristofer’s choppy current for so long before her character gets consumed by the lacklustre plot.

Part of the problem is that Cristofer’s film is never clear on what it wants to be. On the one hand, it respects those with Asperger’s too much to be the seedy thriller it flirts with being. On the other, its fascination with Asperger’s never gets past surface-level stereotypes. While Cristofer is an award-winning playwright, this is his first directorial effort in 19 years — his last feature, the 2001 Angelina Jolie and Antonio Banderas vehicle Original Sin, lacks focus and panache. This film tries to view the humanity within Asperger Syndrome but, like the night clerk himself, only observes from a distance.