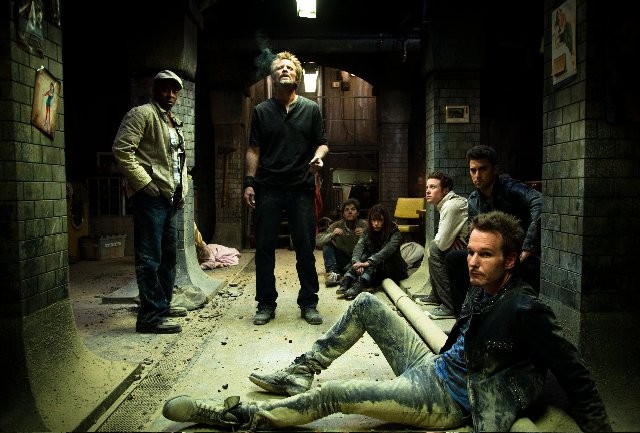 The Divide is a psychological thriller about post-apocalyptic survival that is often horrifying and all around nightmarish. From claustrophobia to torture, radiation sickness and murder, this movie is intentionally void of anything that makes an audience feel comfortable or at ease for longer than one or two brief moments. On this level it’s an achievement, but ultimately the story suffers from a shapeless script.

The first scene is very effective in throwing us right into the action when it opens on the tenants of a crumbling building running for their lives as the world around them collapses. Nine “lucky ones” make it into a bomb shelter before the rest are shut out by the shelter’s keeper Mickey, played by Michael Biehn. The scenario Mickey finds himself in suits his disposition about as well as most of Biehn’s characters, and he is given full reign to be his typical angry self. Aside from the fact that they all live in the same building, we never learn much about these characters’ lives prior to the nuclear attack. We do find out that Mickey is a former firefighter and it is hinted at that his wife was killed in the September 11th attacks, which presumably is supposed to give some insight as to why he maintains such a well stocked shelter.

At first it seems like it’s going to be the Mickey show, as Biehn’s is the most recognizable face in the cast and his character seems to hold all the cards. But surprisingly Mickey kind of falls by the wayside as Josh (Milo Ventimiglia) and Bobby (Michael Eklund), who start off looking like a couple guys from Jersey Shore, basically out-crazy Mickey and end up declaring themselves the resident alpha males. Shooting in chronological order with a loose script allowed the actors, who themselves had to go on an extremely scant diet, to really put themselves into the decline of these characters and get under the viewers’ skin as the last guys you’d want to be stuck in a bunker with. They’re disturbing and occasionally humourous performances were aided by some very effective hair and make-up touches. I can definitely see Saskatooner Eklund in particular having a successful career creeping people out in smaller character roles to come.

Another cult favourite who goes to an extremely dark place for this movie is Rosanna Arquette. The traumatizing events of the first part of the story leave her with a numb stare that tells us she no longer has any use for reality. She gives herself over to the brutality of the men so completely that we lose all hope for her early on. As with most films dealing with this subject matter, the themes that emerge deal with gender, power, trust, and survival of the fittest in this microcosm of society. The result makes Lord of the Flies look like Fantasy Island.

All in all, The Divide is a successful entry into a well-tread sub-genre of horror, but it is still essentially a B movie that suffers from some technical issues and a script that by most accounts was rarely consulted while shooting. If you have the opportunity to catch it during it’s limited theatrical release, don’t write it off as unworthy, but don’t expect it to brighten your day either.