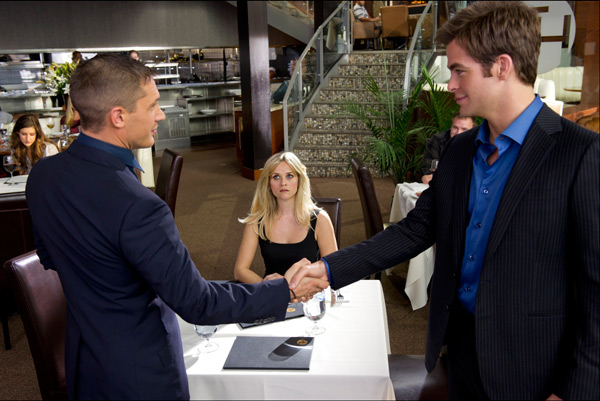 This Means War refers not only to the title of director McG’s latest romantic action-comedy, but also to the exact sentiment I felt about forty minutes into the film. Staggeringly unfunny with a masochistic mean streak, only one of the jokes in the film even manages a single actual laugh, making for an extremely long feeling 95 minute sit. As for the action elements, it’s so amateurish that even the man who made the Charlie’s Angels films should be ashamed of himself. Ugly, incoherent, and all around lazy as hell, this is exactly the kind of movie I feel I will be weeping about when it inevitably hits number one at the box office.

The asininely named Tuck (Tom Hardy) and FDR (Chris Pine) are two best friend CIA operatives and wetworkers who fall for the same woman, a perky-but-not-exactly-quirky consumer rights advocate named Lauren (Reese Witherspoon) who has been forced into the world of online dating by her married, alcoholic, quirky best friend (Chelsea Handler). Tuck meets Lauren through the dating site and is immediately smitten with her, while FDR meets her by chance in a video store (which I will get back to in a minute) and they have their own “meet cute” flirting session. Lauren doesn’t know that the two men are so close they’re practically brothers/lovers, so she dates the two men concurrently while the animosity between the besties grows to heights that find the men using company resources illegally to spy on and sabotage each other’s dates. Oh, and this all happens while a crazed criminal genius (Til Schweiger) looks for revenge on Tuck for accidentally killing his brother in the film’s opening sequence.

The biggest problems with the film start with the characters and the actors playing them. No one in this film has an actually defined persona. FDR is a somewhat pervy ladies man who lives in an apartment under a glass bottom pool. Tuck is a divorcee with a kid and he’s really British, which this film seems to think is equal parts hilarious and insulting. Lauren just has ill-defined bad luck with men and works in quite possibly the most ludicrous looking product testing office on the planet. It looks like one of the sets from Down With Love mated with an amusement park and then a unicorn puked on it. They also inhabit a world where making fun of kids and old people always seems hilarious, including a kid with a bucket on his head for no reason. Because that’s funny with no context, right?

It’s not Hardy’s fault that he’s so astoundingly bland in the film because the script (from Just Go With It scribe Timothy Dowling and Jumper writer Simon Kinberg) gives him nothing to do other than to be British. Witherspoon could play this type of role in her sleep, but she also does get the one aforementioned laugh in the film in an almost surreal sequence where she sings along to Montel Jordan’s “This is How We Do It” so loudly that she doesn’t realize Tuck and FDR have broken into her home to place bugs and cameras in her apartment.

Then there’s Pine. After showing such promise in Star Trek and the delightfully crazed Unstoppable, to watch the third rate Rob Lowe impression he gives here simply makes the skin crawl. He’s very obviously miscast and unbelievable, but there’s no indication that Pine even understands this character. He just smiles a lot and makes smart assed comments that sound like they’re coming from a computer. I can’t tell if he doesn’t care about the material or if he cares too much and is overcompensating. Either way, it’s a pretty big strikeout. Then again, the writing can’t be doing him any favours.

On top of that, Chelsea Handler might be one of the worst on-screen presences of all time. McG simply hired her to do her usual “Oh man, I’m drunk and like to fuck a lot” shtick, but never-ever-in-a-God-damned-millennium will that joke ever be funny. She’s the female equivalent of Pauly Shore in his prime. Every time I see her on TV or any second she’s in this I yearn for death’s sweet embrace, but I do have to say that she’s the perfect fit for this film’s utterly loathsome material.

As for the much derided McG, this film represents the bottom of his barrel. Every sequence is shot like a Honda commercial, with very little inventiveness outside of the occasional production design achievement. The action sequences are edited into incoherence, are relatively bloodless, and hold absolutely no dramatic tension. They are also marred by some of the worst and least convincing CGI outside of an Asylum release, especially in the first of the film’s three(!) endings.

Aside from the Montel Jordan sequence, the film’s squandered promise can best be summed up by walking through its most curious sequence. It’s the scene where FDR first meets Lauren in a “video store.” I use air quotes because it’s obviously an HMV in downtown Vancouver, which doubles for Los Angeles for most of the film. Even people in the States should be able to notice the large number of copies of Fargo for six dollars and the whole shelf of Orphan DVDs priced 2 for $20. It should further tip clever audiences off that this “rental” location has an entire section devoted to the Criterion release of The Lady Vanishes.

You see, other than showing off his obvious artistic pretensions (and to say nothing about an extended sequence where FDR pretends to know about Klimt to get into Lauren’s pants), the scene and the shelf solely exist so that Lauren can compliment FDR’s taste in movies, but then berate him for not picking a better Hitchcock film. “It’s a second tier title,” she complains. Aside from the pot calling the kettle an idiot before throwing a beer in its face, it’s the one sentiment that McG gets right. He almost knows his movie is a second tier title designed only to appeal to the least discerning moviegoers, but to say that’s he’s even in the same league as anything Hitchcock ever did… Well, let’s just hope he doesn’t get whiplash from all those pats on the back he must be giving himself.