“Speaking honestly, an all-male party feels almost more approachable for players,” the Final Fantasy XV director told GameSpot. “Even the presence of one female in the group will change their behaviour, so that they’ll act differently. So to give the most natural feeling, to make them feel sincere and honest, having them all the same gender made sense in that way.”

In a way, he’s correct. Men behave differently around other men than they do when in mixed company. I’d assume the same is true of women, though I have no personal frame of reference. Final Fantasy XV is a different game with an all-male party than it would be with a mixed party or a female party.

However, his use of the word ‘natural’ is utter nonsense. What Tabata fails to recognize is that every single human interaction is in some way natural (as opposed to artificial), because it’s natural to adjust our behavior to accommodate those around us. We’re not the same at home as we are at work. We’re different with family than we are with friends. We alter our manners when meeting strangers because we want to make a good first impression. All of those dynamics are different. None of them are fake. All of them are equally natural.

Tabata’s comments are so infuriating because they equate naturalism with an exclusively male fraternal experience. Everything else becomes unnatural and is therefore not to be trusted. A man apparently can’t be his true self while interacting with women, an implication that also serves as a handy rationalization for a lot of dangerously anti-social behavior. If interactions between men and women are unnatural, then men can’t be held responsible because they are never themselves when talking to women.

Meanwhile, interactions between women apparently aren’t approachable. Rather, they’re false, foreign and off-putting, because who knows what women say to each other when there aren’t any observant men around to pay attention?

If a woman speaks in a video game and there’s not a man to hear it, did she really talk?

Of course, I would imagine that those interactions are quite approachable and familiar if you’re a woman, and it’s not as if any of it should be that mysterious. Women articulate their own experiences as readily as men, and a good writer makes the specific feel relatable for any audience. That’s as true with a cast of women as it is with a cast of men, which is why Final Fantasy X-2 remains one of my favorite games in the franchise.

With that in mind, Final Fantasy XV may actually be less approachable for a sizable portion of its audience. Final Fantasy has always featured strong female characters (at least compared to the rest of gaming), and also has plenty of female fans. Given that history, the monobromatic party feels unnatural in context of the franchise, both in terms of character and design. Final Fantasy is known for its improbable sense of style, with colorful, visually distinct characters and locales. Say what you will about Tidus, but at least his costume was memorable. The bros in FFXV look like they all walked off the same trench coat assembly line, which is enough to make me nostalgic for the days of mismatched jorts and superfluous zippers. 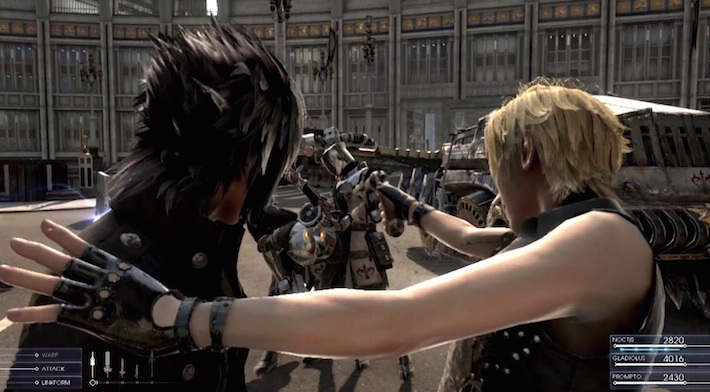 So – since we’re speaking honestly – the notion that Final Fantasy XV is more approachable with a brooding all male party is fucking bullshit. Sure, it might be more approachable for adolescent boys that don’t yet understand heterosocial peer groups, but that is no longer the only (or even the primary) demographic in gaming. For those of us who regularly interact with men and women in our everyday lives, the cloistered road trip is a good deal removed from reality, and is neither more natural nor more inviting. It’s a contrivance, one that is not any more or less honest than a video game with women.

That isn’t to say that Final Fantasy XV will be a bad game, and there are other elements of Tabata’s interview that offer cause for optimism. A story that openly portrays and explores masculine intimacy could be interesting, especially if it departs from the stoic, aggressively platonic “no-homo” form of affection depicted in games like Gears of War. If done well, it could provide a more positive image of male affection that could potentially disarm more toxic, posturing forms of masculinity.

I just don’t like the implication that the game is inherently more natural as a result. Tabata’s comments betray the tacit assumption that video games exist to cater to the sensibilities of young heterosexual men, and that anything that falls outside that purview is foreign to the medium. That shuts out many compelling human interactions, particularly if used as a means to sidestep more challenging conversations. Discomfort and awkwardness may not be pleasant, but they are completely natural feelings that people regularly deal with in their everyday lives. It’s perfectly OK for games to reflect that complexity, and it’s also more honest because there is no world where women and men do not coexist.

Final Fantasy XV is ultimately a game about a highly specific social arrangement. If it is honest, it will only be honest about that particular set of circumstances. It won’t be able to touch on the range of human experiences, and it is harmful to suggest that one is any more natural – and hence more valuable – than any other. FFXV may still be worth playing, but it’s time to stop pretending that the adolescent male perspective is the universally approachable default for human understanding.