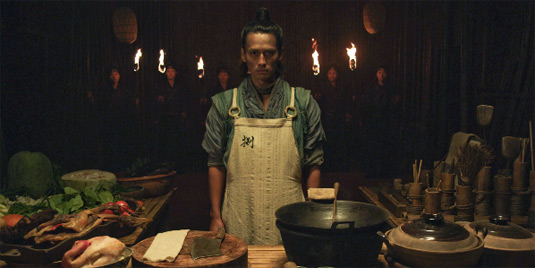 The Midnight Madness programme at TIFF has always been heavily slanted towards Asian films, so it was a surprise that 2010 saw the first entry from mainland China. Director Wuershan’s feature debut, The Butcher, the Chef, and the Swordsman, however, is pretty much the epitome of a Midnight Madness film: it is bonkers. A combination of period film, slapstick comedy, food film, love story, martial arts film and revenge thriller, with objects, images, and a contemporary soundtrack constantly being thrown at the audience, this is a film that should not work. But somehow, Wuershan keeps up a frenetic pace that leaves no stone unturned while allowing the audience to absorb each moment.

The first character, the Butcher, has been hoarding his pennies in order to pay for a night with the town’s most beautiful prostitute. When Madame Mei’s most important client, Big Beard, crushes his dreams, the Butcher is thrown out of the brothel and encounters the Chef, who tells the story of his magical cleaver and the joy and pain it brought him. The Chef found his way to being the apprentice to the greatest chef in order to kill an important man who had ruined his family. Within the Chef’s story is the Swordsman, who found the greatest iron in the world and hired a blacksmith to make the greatest weapon (the cleaver was made from the remains.)

Each of the stories is given a different approach: the Butcher’s is mostly slapstick, with exaggerated physical gags and a rap number performed by the women of the brothel; this is frequently combined with video game graphics and oddball Looney Tunes style insanity. The Chef’s combines comedy with the traditional components of the food film: the process of creation of sumptuous meals that will make you want to run to Chinatown. The Swordsman’s tale is about martial arts, filmed in grays and reds, with the clichéd montage of the making of the sword elevated through the oddball blacksmith.

The film occurs in such frenzy that it is hard to take a breath. And yet, without this pacing the film would never succeed. Much of the film’s humor is based on Chinese puns that are likely lost in translation; but whoever wrote the subtitles was able to find extremely funny English equivalents. The film is a wonderful contrast to tradition Chinese costume dramas or fantastic-genre films that insist on bringing gravitas to everything. A strange combination of the Three Stooges, Hitoshi Matsumoto and Edgar Wright, this film breaks almost every filmic rule regarding amount of content, pacing and editing speed, but somehow the combination flies through the air as swiftly and smoothly as the magical cleaver, slicing all that oppose it.