With the 2012 Toronto International Film Festival right around the corner, Dork Shelf kicks off its coverage with some big titles from the first weekend that we’ve already been able to catch in advance of the festival. Remember to stay tuned throughout the week as Dork Shelf will be providing you with news, reviews, and interviews every step of the way.

Without further ado and leaving the pomp and circumstance to the hard working festival promoters and planners, here are our thoughts on eight of the hundreds of films in store for audiences this September 6th-16th. For more information, to buy tickets, or for more titles, be sure to visit tiff.net.

A bold choice and break from tradition for an opening night selection at TIFF, Rian Johnson’s Looper is an ambitious, stylized, dark, and extremely violent sci-fi thriller (featuring sometimes gory and shocking eviscerations, dismemberments, and decapitations) slotted in a position usually reserved for far more genteel fare. The gamble pays off thanks to the brilliant mashing together of genres from Johnson and a high level of unpredictability. Despite the detraction that there’s almost too much going on and some of the details aren’t perfectly fleshed out, the movie moves so fast that most probably won’t notice.

Joseph Gordon-Levitt plays a futuristic hitman called a “looper,” who carries out mob hits from the future sent back in time to be whacked without leaving any evidence behind in the future. (If that makes little sense, the film explains it better than a capsule review ever could.) When his future self (Bruce Willis) mysteriously arrives in front of him one day, the two versions of the same person begin a cat and mouse game with vastly different motives and end games.

Gordon-Levitt and Willis are perfect foils for one another, and as the film begins to add plot points as it goes (a future mob boss on a reign of terror, people with telekinetic abilities) the plot grows denser before allowing any answers. Huge kudos to Johnson for being able to keep everything together in a coherent and wildly entertaining package.

It might not be too debatable that Dredd 3D works as a more faithful introduction to the cult comic lawman from the future than the character’s Sylvester Stallone vehicle from 1995, but it’s not better by much. Stallone’s film at least had a sense of humour and fun. This one has a great script from Alex Garland (Danny Boyle’s right hand man) and a perfect choice of lead, but weak direction from Travis (Vantage Point) makes this one a sadly dull slog.

Called to a tenement building to investigate and arrest following a gruesome drug related triple homicide, Judge Dredd (Karl Urban) and his new psychic partner (Olivia Thirlby) are stuck in a lockdown situation as the slum’s resident drug lord (Lena Headey) locks down the building and gives the residents orders to ensure the police don’t make it out alive.

Urban and Headey make good foils for each other, with both appropriately menacing, but Travis simply can’t pull off this level of action. The gore could appeal to genre fans, but with so many other action films raising the bar in terms of what’s possible, seeing something with endless slow motion sequences of 3D smoking and glass shattering into sparkles is ridiculous and dull. Also, the action very rarely rises above people simply shooting at each other from across the building. There’s very little tension, doubt, or logic, but there’s an audience for this kind of film. Just not for anyone looking for anything special in their action films.

Forced, manipulative, and strangely illogical, Rust and Bone marks a rare and grievous misstep in the career of French filmmaker Jacques Audiard (The Beat That My Heart Skipped, A Prophet), but it will likely gain a lot of attention thanks to appearances by the white hot leads Marion Cotillard and Matthias Schoenarts (Bullhead), who are fine, but undone by overly sentimental material from someone who doesn’t know exactly how to bring it all together.

This story about the burgeoning friendship and sexual relationship between a former Marineland (that’s really what it’s called) orca trainer that’s become an amputee following an act gone awry and a former transient security for hire worker-slash-underground boxer with a kid, feels completely resolved after 45 minutes, but Audiard clearly wants to craft a film to push every possible button in and around the audience’s tear ducts despite none of the characters being remotely likable or all that sympathetic. The film’s insistence through hoary music, inspirational movie clichés (one of which is set to Katy Perry’s “Firework”), and, worst of all, a child that’s only used as a prop to put into dangerous situations, makes any and all of Audiard’s posturing completely transparent. Add to that a clearly awards baiting performance from Cotillard that has little to no substance or show of struggle with her disability (a fault of the script, not her), and you have one of the festival’s biggest disappointments.

The Perks of Being a Wallflower

Over a decade in the making thanks to his desire to retain some control over his own beloved young adult novel, Stephen Chbosky’s The Perks of Being a Wallflower makes its long awaited jump to the big screen in a form that will mostly please fans of the story of introvert Charlie (Logan Lerman) and his desire to fit in make friends with his older crush Sam (Emma Watson) and her gay stepbrother Patrick (Ezra Miller) during his first year of high school. It’s also the kind of film mainstream indie audiences will eat up.

The film starts of shaky thanks to some choppy camerawork, the realization that Chbosky really isn’t that excellent of a director, and an odd sense of place that never makes the film’s time period clear (it’s the mid-90s). Lerman and Miller positively nail their roles as social outcasts worthy of being loved in spite of deep personal traumas, but Watson has to work a bit harder to find her character thanks to some changes made by Chbosky to make her character seem more cinematic at first (meaning “dangerously close to manic pixie dream girl for the first 30 minutes”). As a fan of the book, I can say that some things do get lost in translation, but enough of the source material’s heart, wit, and keen perception of teenagers makes it to the screen to make it successful.

Another triumph for actor John Hawkes (who many think was robbed of an award nomination for his work as a cult leader in last year’s Martha Marcy May Marlene), The Sessions has all the trappings of an edgy, feel good indie film, but with considerably more wit and enough subtle touches to overcome a somewhat standard final act.

Based on a true story and adapted from an article written by Mark O’ Brien (played here by Hawkes), Ben Levin’s film tells the story of O’ Brien’s desire to lose his virginity despite having spent more than three quarters of his life confined to gurneys and an iron lung. Mark’s sexual awakening and desire to lose his virginity leads him to Cheryl, a sex therapist who has never worked with someone as disabled as he is.

Hawkes, confined to a bed the entire time and sporting a sunken in midsection ravaged by polio, delivers a commanding and ultimately very witty performance. Mark doesn’t wallow in his situation and Hawkes paints a picture of a man curious to experience everything in life before his inevitable death. Hunt and William H. Macy (as a sympathetic priest who acts more as a friend than a spiritual guide) are also great, but the film really feels wrapped up an hour in, leaving only a string of predictable and sometimes forced dramatic beats in its wake, but even then the cast elevates the material to keep things highly enjoyable.

In the exhilaratingly original, hilarious, and occasionally terrifying dark comedy I Declare War, young kids play out a game of capture the flag in the middle of the woods that seems like it was thought up by the love child of Wes Anderson and William Golding in the best possibly ways.

Taking the axioms “Kids can be cruel” and “War is hell” and combining them, the audience watches as a power struggle breaks out among two faux armies: one led by master strategist P.K. (Gage Munroe) and the bully usurper of power Skinner (Michael Friend). Lapeyre and Wilson make the sure to be misunderstood decision to replace their homemade stick guns with perceived real guns, but the perceived level of artillery based violence isn’t the point. The real point here comes from the actions of children who will use psychology, torture, and the natural elements to do far worse damage that what they imagine they’re holding.

The film also works because every kid on the battlefield has a distinct personality to them and they all get equal time to shine, which is great since there isn’t a weak link among them all. These are smart kids who get the satire of the film around them, leading to performances that are chilling when they need to be and hilarious and awkward like children often are. 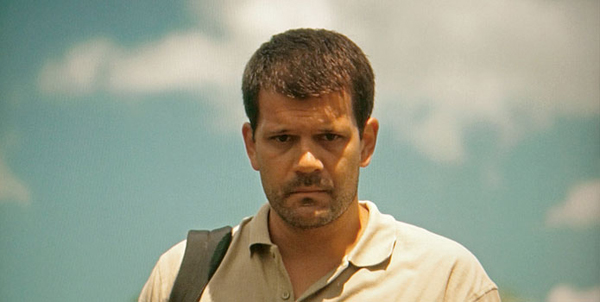 After finding success at last year’s festival in the Short Cuts Canada programme with his semi-autobiographical short The Fuse: Or How I Burned Simon Bolivar (which also got selected for TIFF’s Canada’s Top Ten earlier this year), Igor Drljaca returns this year with a stylish, low key feature that brings the filmmaker back to his native Bosnia to tell one man’s search for a friend and the truth behind his disappearance and fall from lawfulness.

Miro (Goran Slavkovic) leaves behind his Toronto based construction job to look into the whereabouts of his former best friend, a man he hasn’t seen in years that became a profiteer during the bloody Bosnian civil war and is currently wanted for war crimes. While his actual journey might seem like an existentialist and bleak comedy of errors, Drljaca prefers to focus on a dreamlike sense of displacement in a country that has grown accustomed to the feeling all too well. Through long takes across sparse landscapes and quiet contemplative moments, Drljaca and Slavkovic – who’s great as a stoic bundle or tics and quiet neuroses – work to tell the story of one man that’s never quite sure what he’s exactly looking for despite his surface mission and who’s equally clueless as to where to start looking for it.