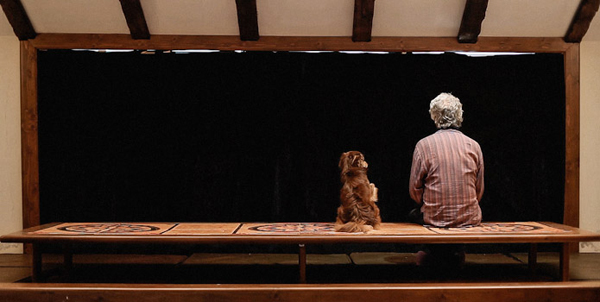 If This Is Not a Film lived up to its title by logically examining how the language of filmmaking changes when one, by law, cannot make films anymore, Closed Curtain responds to the director’s harsh sentencing to house arrest emotionally.

The camera’s first shot looks out over a series of gates and barriers, though Kambozia Partovi’s unnamed writer, hiding his dog “Boy” from authorities after Islamic law renders the pets illegal, enjoys a codependent relationship with his imprisonment, drawing curtains over his windows to ensure no one can get in as much as he cannot leave. The arrival of a mysterious young woman (Maryam Moqadam) precipitates a collapse of the diegetic reality, yet the opened up dimension only exacerbates the sense of paranoia eating away at the picture.

The allegorical fears of hiding the dog pale in comparison to Panahi himself all but begging an inquisitive neighbor not to report a robbery for a glass door the director broke in his own home for the film. But just as Moqadam tormented the writer with her free spirit, so too does she haunt her creator, a vision of a muse that threatens to be separated from him forever. Panahi’s fears of losing it are unfounded: as with his pre-incarceration work, the director finds liberated forms of expression in the constrictive, theocratic bonds placed on him. Added restrictions have only caused him to explore new possibilities of narrative and self-reflexive cinema. (Jake Cole)