After watching Nathan Grossman’s biographical documentary, I Am Greta, the first thing that came to mind was HBO’s mega-hit TV show, Game of Thrones.

For eight gripping seasons, Game of Thrones delivered some of TV’s most shocking moments as the show’s political powers schemed and waged war to rule the land. After 73 episodes of plotting and backstabbing, one theme became crystal clear; be suspicious of anyone who desires power.

Absolute power corrupts absolutely. And even people with noble intentions are forced to compromise their values. So, in an age when everyone is chasing their 15-minutes of fame, which public figures can we trust not to act out of self-interest? Which brings me back to Grossman’s doc, I Am Greta.

The film follows around a 15-year old Swedish girl named Greta Thunberg. As the doc begins in August 2018, we find Greta striking from school and standing outside Sweden’s parliament. Her goal is to make government officials acknowledge (and do something about) the climate crisis. And unbeknownst to Greta, her lone-wolf protest is about to ignite a global movement.

Greta is on the autism spectrum, which gives her the ability to lock in on a subject with intense focus. It also accounts for her blunt, no-nonsense demeanour. This young activist pulls no punches when discussing climate change. According to Greta, the earth is in peril, adults have failed the next generation, and it’s time for a change. 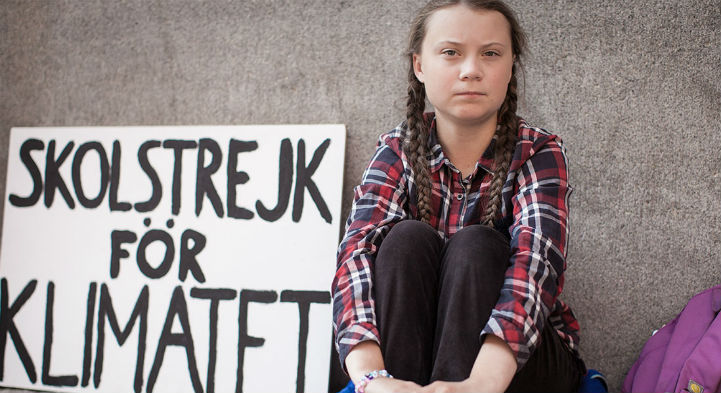 Before long, Greta’s protest creates some buzz, and she’s talking to journalists and travelling across Europe speaking to national leaders. Suddenly, Greta is a global celebrity inspiring teens worldwide to fight for their future.

I Am Greta tells an inspiring story about how one small person can make a difference. But what stands out is her unwavering conviction. This young lady is willing to back up her tough talk. Time and again, we see examples of how Greta’s beliefs make her lifestyle considerably more challenging—like starving herself rather than consuming meat and dairy products while out on tour.

Most notably, Greta opts to take a sailboat across the Atlantic Ocean to attend the September 2019 UN climate summit. She endures several weeks of isolation and seasickness because sailing leaves a smaller carbon footprint than flying. How many of us could rationalize taking a plane if we were in her shoes? After influencing hundreds of thousands of people to be environmentally conscious, Greta’s carbon footprint karma score must be -10,000.

Grossman takes a fly-on-the-wall approach to documenting his subject’s life. Even though you spend the entire doc with Greta, it doesn’t feel like you know her. Sure, we know what she stands for, and how she’ll react in certain situations. But you never fully understand what Greta’s newfound fame means to her. I don’t know if that’s a filmmaking choice or whether Greta refused to pander to the camera in talking-head segments.

All Greta cares about is saving the planet. It’s refreshing to see this unlikely star turn her nose up at celebrity when it doesn’t aid her cause. How often does fate place power and influence in the hands of those who don’t care to wield it? If Game of Throne taught us anything, it’s that the greatest leaders are the least power-hungry.

During a rally late in the film, a reporter emerges from the crowd to tell Greta that these people are there to see her. “No,” Greta answers without skipping a beat. “They’re here for themselves and for everyone.” That statement right there tells you all you need to know about Time’s 2019 Person of the Year.