In the streaming era, new TV series must bring their A-game if they want to grab viewers’ attention. Programs now have too much competition to stumble out the gate and leave a bad impression. But the truth is that even good TV series take several episodes before they hit their stride. Building a new world, creating new characters, and setting up a story’s stakes is no easy task – especially when dished out in 40-minute bursts.

Titans’ first three episodes are especially tough sits. They’re full of awful dialogue, shaky performances, and sad-sack characters. But if you hang in, Titans turns a corner somewhere during the absolutely bonkers fourth episode titled Doom Patrol. At that point, the series cashes in on just enough of its intriguing premise to keep viewers tuning in for the long haul. 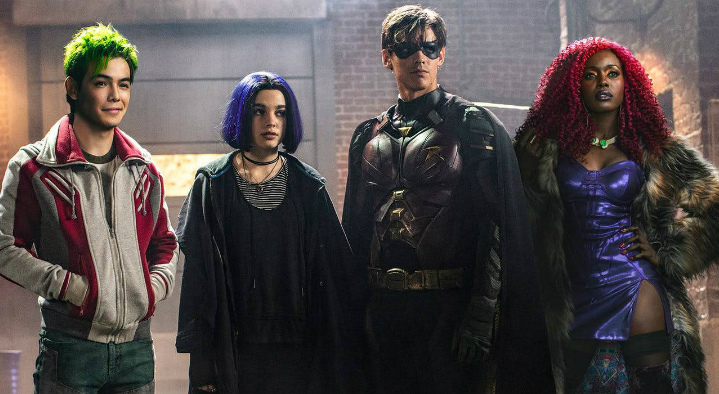 The series begins by introducing us to Rachel, a teenage girl who is tortured by her supernatural powers. And unbeknownst to Rachel, a murderous cult is hunting her down. Dick, having left Gotham City behind is now a detective working in Detroit. And he vows to protect Rachel after one of her pursuers infiltrates the police force and kidnaps her from under his nose. It turns out rescuing Rachel is the easy part, keeping her safe means evading the authorities as well. With nobody to trust, Rachel and Dick go on the run. It’s on the road that they cross paths with a deadly amnesiac named Kori and a mysterious teen named Gar. Revealing any more details would spoil the fun.

Say what you will about DC’s live-action movies, their TV series are on point. The Flash, Arrow, and Supergirl feel like graphic novels brought to life. These shows deliver thrilling comic book action, adventure, and melodrama in meaty 22-episode batches. Most importantly, these series are fun watches.

Titans turns the joy-dial in the opposite direction. It serves up a grim world full of hyper-violent heroes who are haunted by dark secrets. These protagonists feel like they exist in Zack Snyder’s bleak DC universe. It wouldn’t shock anyone if Titans’ Dick Grayson used to work in the DCEU along Ben Affleck’s murderous, pro-torture Batman.

There is a place for both uplifting and depressing comic book adaptations, and I don’t begrudge Titans for leaning towards darkness. The problem here is that darkness acts as a substitute for depth. It feels performative and not in service of character growth. It’s like a kid cursing and choking down a pack of Marlboros because they think it makes them look like an adult. The sex, violence, and language in the show scream out, “Look how grown up I am.”

The heroes rack up high body counts and brutally take down their foes. Some acts of violence look like Mortal Kombat fatalities. The good guys rub villains’ faces in glass shards, char them to crisps, and pummel their faces into strawberry jam. They spend the rest of their time brooding, having sex, and swearing like drunken frat bros. For too much of the season, there isn’t much more to the characters.

Rachel, Dick, Kori, and Gar aren’t interesting people. Dick feels like Batman-lite, a sulking and hyper-violent vigilante who is afraid to let people get close to him. Rachel is as compelling as the lead in some shitty straight-to-video horror flick. Potter adds a bit of spunk to his character Gar. With his love of video games and collectibles as well as his bright smile, Gar has the makings of a fan-favourite, but the writers don’t give Potter leeway to make the character pop. 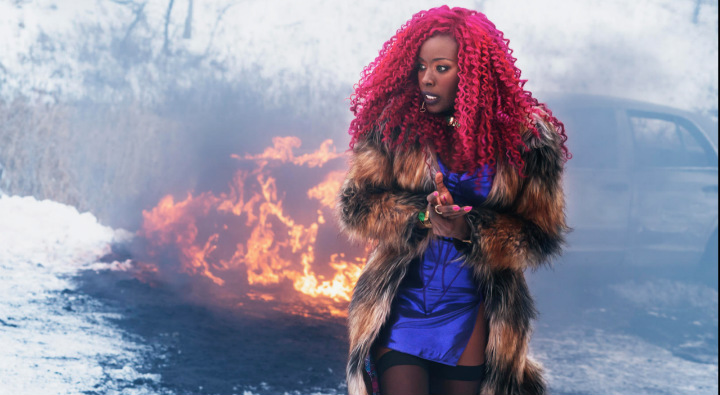 Kori wears her heart on her sleeve and is the glue holding the group together. Kori’s amnesia means she’s a blank slate which gives Diop the creative freedom to let her charisma shine through. Kori is capable of being selfless one moment and ferocious the next. But no matter the situation she’ always charming, and the most watchable Titan.

Titans tells the story of four broken people coming together and becoming a family. And by the end of season one the group kind of gets there. Characters profess their love for each other and say things like, “That girl means a lot to me,” but these feelings don’t feel earned. The show doesn’t spend enough time forging their relationships. If Gar, Rachel, Kori, and Dick bonded on their interstate drives we sure as hell don’t see it. Maybe it all happened during their downtime between episodes? As a viewer, it never feels like this group knows each other very well. I don’t know how much time passes during the season, but it doesn’t seem like a lot. And when consuming this series in a couple binge-chunks, the cast goes from strangers to dear friends in the blink of an eye.

I enjoy the CW’s superhero TV series, but one area where they suffer is in their shooting locations and production design. Booming metropolises like Central City and Star City come off as lame suburbia’s. The shows are shot in Vancouver Canada, which explains the grey skies, bland architecture, and clean streets.

Fox’s Gotham is one show with excellent shooting locations and high production values. Shot in New York City, the program makes Gotham City look like a living breathing cesspool. Skyscrapers line the streets and seem to go on forever, and there’s a sewer grate bellowing steam on every corner. I would love to live in a world where they shot Arrow in New York, and The Flash had Gotham’s sense of atmosphere.

Titans is shot in Toronto, Canada, and while it can’t compete with Gotham’s gritty vibe, The 6ix offers a visual step up from The Flash and Arrow’s banal locations. Fights go down on deteriorated rooftops, threats lurk in mist-filled alleys, and characters hide out in grimy motels, and these backdrops look lifted from a Batman comic.

If you closed your eyes and imagined your dream live-action comic book program, it would look a lot like Titans. The cast resembles their comic book counterparts as seen through a real-world lens. Beast Boy may not be green, but his spiked lime-coloured hair and sporty red jacket are solid homages to his comic roots. Kori, with her bright red curls and shimmering purple outfits, also stays true-ish to her character’s classic look. And Teen Titans’ fans will nerd-out whenever Kori gets mad and goes into “flame on” mode.

Robin’s suit looks bad-ass. Making live-action superhero costumes that don’t look dorky is no easy feat. There’s a reason that Batman movies keep the Caped Crusader in the shadows – rubber and leather look tacky under a movie set’s harsh lights. The show lift’s Robin’s costume right from the comics, and it looks great in action. Mostly because Thwaites, and for that matter, the entire series plays the heightened material straight. 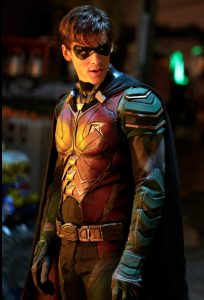 The most impressive aspect of Titans is that it wants to be a comic book TV series. Everybody loves Christopher Nolan’ Batman movies. I do too, but that trilogy doesn’t exist in Batman’s typical comic book world. Quite the opposite. The Dark Knight trilogy tracks like it’s embarrassed by its comic book roots. And that trilogy’s success sets a bad precedent.

Nolan’s movies spend too much time justifying why a man would dress as a bat, lead a league of assassins, or wear clown makeup. Those movies never embraced the extraordinary aspects of the source material. Even a very comic book-y show like The Flash often gets cheeky – the way the show names villains is a running gag. Titans knows it’s a comic book TV show and embraces its outlandish source material without apology. This becomes clear after the Doom Patrol episode, which gets as unapologetically kooky as anything on TV.

This show’s four leads are a former child vigilante, the central figure in a death cult, a shape-shifter, and a space alien. That’s where the series begins, and Titans only gets more comic book-y as it goes along. It’s a program that can be as wild as its writers’ imaginations. Season one offered many fun oddities; a Leave It to Beaver-like family of assassins, mad-scientists, and an alien spacecraft. And I’m leaving the coolest bits out. Characters routinely throw out names like Wonder Woman and Superman, and it doesn’t feel like lip service or half-assed world-building. What we see in Titans feels like a tiny sliver of a world that’s full of superheroes and supervillains.

After kicking off with a few shaky episodes, the series starts finding its voice. Titans is at its best when it revels in bold characters, insane plots, and eye-popping visuals. But despite finding its voice, this still isn’t a very good series. Most often, Titans is good enough. The high-points sprinkled throughout the season should keep viewers coming back for more. If this show ever settles down to flesh out its team of heroes and their relationships with one another, it could be great. For now, Titans remains in the minor leagues