Uncharted 4: A Thief’s End opens with a boat chase in the middle of a storm with high seas that rival any spectacle the series has delivered. Ships are destroyed and lives are almost lost as if to imply that A Thief’s End will be nothing more and nothing less than the rollicking adventure that fans have come to expect.

That’s why it comes as a surprise when the game immediately subverts those expectations and settles into a more leisurely pace, with a string of chapters in which you don’t fire a single bullet. Instead, you get to wander around your house rifling through trinkets, reminiscing about past misdeeds and learning about everything that Nathan Drake and Elena Fisher have accomplished in the years since Uncharted 3. It’s slow, contemplative, and mundane, building to an impromptu round of retro gaming that doubles as a bet over who gets to do the dishes.

It’s a touching moment that more accurately sets the tone for everything that follows. The first few chapters of A Thief’s End feel like an epilogue to the previous games, showing us what reformed treasure hunters get up to when they try to go domestic. Elena has slid comfortably into the role of a reporter. Nate, meanwhile, is the underwater point man for a salvage operation that dredges garbage from the bed of a river, because what else is he going to do? It’s not like he’s got a sterling list of references to attach at the bottom of his resume.

It sounds trivial, but I relish these smaller, introspective glimpses into characters’ inner lives. I always want another ten minutes of denouement at the end of every movie because I want to see where the characters are in ten years, to know that they were able to go on to lead healthy, happy lives after surviving their ordeal. I love watching fictional characters process memorable events. I want to see how people live, in the plainest, most ordinary sense of the word.

Sadly, focus-tested entertainment has a way of grinding off those gentler edges. The blockbuster playbook says audiences love explosions and gun fights and big set pieces with quippy dialogue mixed in amongst the rubble, so anything that doesn’t fit that streamlined structure is jettisoned in favor of things that go boom. The assumption is that there’s no reason to keep going once the bad guy is dead. 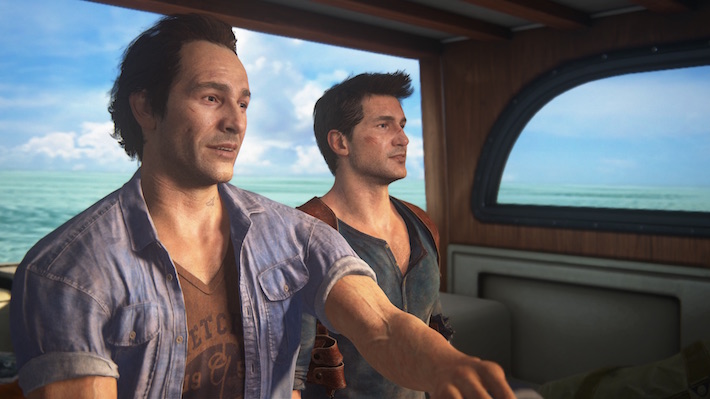 Uncharted 4 bucks that trend, trusting that you care enough about these people to be interested in what they do with their downtime, and I wish more studios had that kind of courage. Naughty Dog recognizes that events of the first three installments would have a substantial impact on the lives of the people that lived them, and it mines that knowledge for much of the dramatic conflict. The characters we meet in Uncharted 4 are wearier than they were when we first met them in Uncharted: Drake’s Fortune. The lines in Nate’s face let us believe him when he expresses a desire to avoid any future illegal activities.

Of course, Uncharted is built around gun fights and explosions, so it’s only a matter of time before Nate’s resolve begins to crumble. Here, the sudden reappearance of Nate’s long-lost (and presumed dead) brother Sam provides the narrative impetus that gets Nate back on the trail of the lost pirate treasure of Henry Avery. The bulk of the game follows a familiar pattern of climbing, puzzles, and shootouts in remote jungle ruins, a saga that is in many ways indistinguishable from those that came before it.

The difference is that we have a much greater sense of consequence because Uncharted 4 showed us what Nate and Elena stand to lose if the job doesn’t go well. That knowledge makes us worry as they yet again put themselves in danger, infusing the game with an almost funereal aura long before the first body has hit the ground. If the title screen in Uncharted 2: Among Thieves featured musical fanfare that invited players to adventure, Uncharted 4 is eerily quiet, offering only the foreboding image of a skeleton in a rusty cage swinging in the breeze.

It’s therefore appropriate that Nate approaches the proceedings like a man who knows he’s cheated death a few too many times, and the subtle shift in tone permeates everything from the narrative to the level design to the gameplay. The cut scenes and climbing sequences are longer and more frequent. The levels are less linear and allow for more exploration. Even the combat prioritizes stealth over bravado, offering multiple entry points and hiding places to encourage you to utilize the element of surprise.

It’s a good thing, too, because if you do get seen the combat is the weakest it’s been since the original Uncharted. A Thief’s End doesn’t play as well as its predecessors, relying too heavily on quick time events and blind fire situations. The game has an annoying habit of dropping you into the middle of a shooting gallery without much in the way of quality cover (much of it is destructible). You’re supposed to move around a lot, but it gets frustrating when there’s a soldier with a shotgun waiting around seemingly every corner.

And yet, I’m inclined to forgive the mechanical shortcomings because they’re always thematically consistent. Why shouldn’t the combat be more difficult? Nate finally knows that it’s wiser to fight against one person than it is to go against an army. It’s another nod to the gradual passage of time, just as Sam’s introduction allows team patriarch Victor Sullivan to step back into a support role rather than jumping directly into the fray.

That’s why I can’t complain too vociferously. There are plenty of things to quibble about, but the pieces all fit together and the story is phenomenal, making for a rollercoaster that adds up to more than the sum of its parts. The game comes from the studio at the peak of its confidence, a team still high on the fumes of The Last of Us and proving that it has no peers in the realm of digital storytelling.

I’m not going to oversell the matter. Uncharted 4 is escapist fare that never tries to transcend those feel-good roots. However, Naughty Dog understands that there are different shades of escapism, and that characters have to evolve over the course of a longer series. The refusal to do so can be a death knell. The gameplay in God of War: Ascension was just as brutal as its predecessors, but the series foundered because Kratos was a miserable, vengeful curmudgeon who never learned anything from his trials. The action felt redundant and the story rang hollow because Sony Santa Monica essentially tried to make the same game four times.

A Thief’s End never forgets everything that’s already happened to these characters, which makes their arcs feel more plausible and more relatable than the stock characters we’re usually afforded. The visuals are casually stunning, with breathtaking panoramas that allow the best kind of digital tourism, but the narrative sticks because Elena and Nate have mature, adult conversations along the way. They talk about legacy and family, as well as the wisdom of promises made to ghosts and learning when to let go of the past.

It works precisely because it feels like the fourth game in the series. The game knows that we’ve come to love these characters, and that we want them to be OK after spending so much time with them. It cleverly uses the possibility that they might not be OK – the game is called A Thief’s End – to amplify the tension. There may be someone else competing for the prize, but the villains here aren’t mercenaries or profiteers. The true villains are relationships and time, and the fragile vulnerability of the former given a limited quantity of the latter.

The end result is a franchise that aged alongside its audience and its characters. Among Thieves remains the strongest and most complete entry in the series, but A Thief’s End just might be my favorite, an incredibly satisfying coda to the journey of Nathan Drake and Elena Fisher (and they both deserve the double bill). Naughty Dog draws on the past to make the present more compelling, acknowledging change and demonstrating that old material still feels fresh when placed in the proper context.