Russell Crowe’s new thriller Unhinged sees the Oscar-winning actor play a homicidal maniac with a chip on his shoulder. His character (which IMDb lists as The Man) is entirely off his rocker. He’s a smouldering son of a bitch driven to explosive fits of rage by any perceived slight.

While sitting in traffic one morning, a struggling single mom named Rachel (Caren Pistorius) dares to honk her horn at The Man for blocking an intersection. This “show of disrespect” ends up costing her big-time. The Man takes offence to Rachel’s “rude gesture” and demands an apology. When Rachel refuses to apologize, The Man (I can’t stop writing that name) completely snaps and sets out to destroy Rachel’s life by going after her friends and family in a vicious game of cat and mouse.

I’m just going to put it out there: this movie is bonkers, but not in a fun way. The ludicrous premise is a great set-up for an action-thriller – I’ll give the film that much. The problem is that once Unhinged has your attention, it doesn’t have much to say.

Unhinged starts with a bang as we witness The Man kill his ex-wife and her husband and then set their home ablaze. The vicious opening sequence snatches you by the collar and forces you to pay attention. Brendan Galvin’s claustrophobic cinematography and David Buckley’s pulsing score keep the tension-level cranked up while the grisly sequence unfolds.

Unhinged goes off the rails as soon as The Man starts pursuing Rachel, and it becomes clear that this blood-thirsty thriller doesn’t have much going on beneath the hood. Director Derrick Ellsworth Borte fills Unhinged with fights, chases, and verbal showdowns, but these sequences lack punch due to the film’s weak characters, threadbare plot, and choppy pacing.

I don’t know if I’ve ever watched a movie as chaotic as Unhinged that also feels so dull. It’s one of those movies that start fading from my memory the second the closing credits roll. Much of the blame falls on Carl Ellsworth’s vapid script. I can get behind a ridiculous movie with an implausible premise. But what I can’t do is give a damn about lame characters who spout wonky dialogue. At no point did I care about any of the poor schmucks in this film. It’s tough for a movie to cause that level of indifference with a lunatic like The Man hunting innocent people down.

Speaking of The Man, Crowe gives a wild-eyed performance that also somehow feels restrained. If you think that Crowe’s acting alone is worth the cost of admission, you would be wrong. He doesn’t have 5% of the twisted charisma of the worst Bond villain. Crowe isn’t even fun in that bizarre can-you-believe-what-you’re-seeing way that Nic Cage perfected (as seen in Color Out of Space). Crowe dials it in with a one-note performance that left me wanting. He’s all rage, all the time. Sometimes he simmers, sometimes he boils. Either way, watching him squint and growl gets old fast. 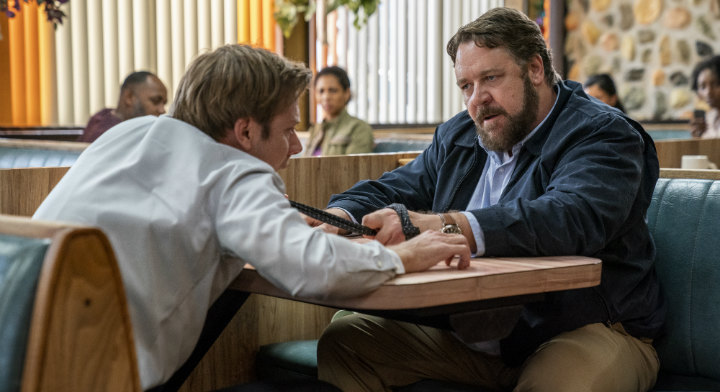 This film attempts to address themes that speak to the perils of life in 2020. In one sequence, The Man traps Rachel in bumper-to-bumper traffic. Rachel pleads for help as he closes in, but people are too busy staring at their phones to notice. It’s the film’s way of telling us that even though our society is more connected than ever before, we’re further apart. We all exist in our own little bubbles. That reductive sentiment may have felt revelatory in 2009, but it’s 2020. We’re more than a decade into the smartphone/social media generation, and this observation feels too obvious.

People have compared Unhinged to Joel Schumacher’s 1993 man-goes-postal movie, Falling Down. Much like Taxi Driver, Falling Down features an unhinged main character. That film creates an intriguing dramatic profile of someone going through a psychotic break – Unhinged centres on the woman suffering the unhinged man’s wrath, focusing on the victim.

A better analogy for Unhinged is an episode of Batman: The Animated Series titled Joker’s Favor. This episode focused on an ordinary schmoe who cusses out a crazy driver for cutting him off. It turns out that crazy driver is the Joker, and the Clown Prince of Crime teaches that random guy a lesson for giving him lip.

Save yourself the time and watch the animated road-rage story instead. Joker’s Favor features tighter writing, compelling characters, and a bad guy that feels less cartoonish.