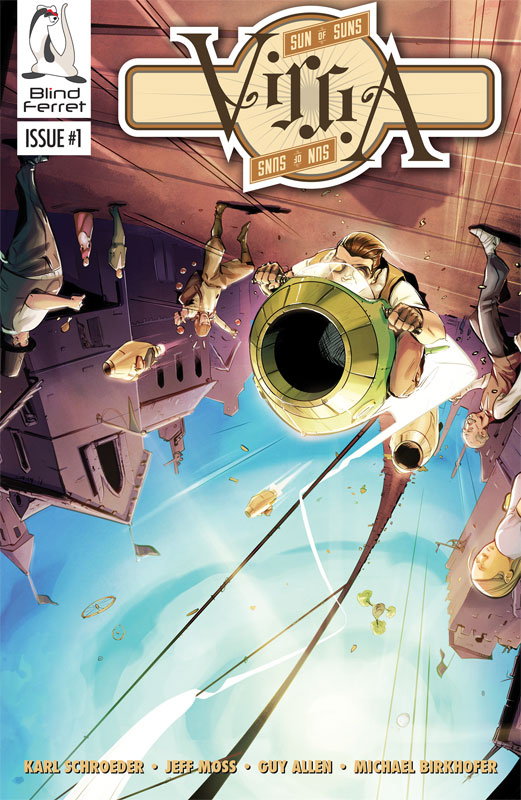 Sometimes, it can be hard to find something really unique in comics. With spandex superheroes constantly battling at the drop of a hat, zombie hordes swarming the horror genre, and indie comics permeated by the dreariness of day to day reality, Virga: Sun of Suns is truly a breath of fresh air. Millions of breaths, to be more precise. As one of the opening pages details, “Virga is a balloon 5000 miles in diameter, orbiting the outskirts of the Vega star system.” Built by humanity thousands of years ago and home to hundreds of nations,  Virga contains and is essentially powered by, dozens of man-made fusion micro-suns. It’s a stunning vision of the future of mankind, bringing together advanced technology with a retro-aeronautical aesthetic. Think zeppelins and rockets flying side by side and other visual elements that make up the Steampunk genre, with none of the pretentiousness. It’s an awe-inspiring setting that immediately draws you in, and completely unlike any other comic I’ve seen in quite a while.

Based on the Virga series of books by Karl Schroeder, Virga: Sun of Suns has been adapted into comic format by Blind Ferret Entertainment, the same team behind Least I Could Do, Gutters, Looking for Group, and more. It’s an ambitious project with a very different tone than BFE’s other titles, but they handle it well. The first issue introduces us to the protagonist, Hayden, and we learn a little about his past before tumbling right into what seems to be a tricky political situation in Rush, the capital city of the nation of Slipstream. Jeff Moss has adapted Schroeder’s story into an easy to follow script that makes sense for the new medium. All the beats land in the right spots, the tone is quickly established and panels don’t suffer from word balloon overload: a common issue with literary adaptations. Guy Allen’s art is serviceable: if I had to nitpick anything about this series, it would be character’s facial expressions, especially in the first few pages. They even out later on in the book but occasionally still suffer from wandering pupil syndrome. My pedantic quibbles aside, he’s created some really intense action sequences and beautiful splash pages that Michael Birkhofer’s colour work elevates to phenomenal.  The colour palette is lush with hues that mimic beautiful sunsets and stunning blue skies. Indeed, for a colony enclosed in a giant balloon, the sky and environment within should reflect the beauty of only the most staggering atmospheric views. It’s a gorgeous comic with eye catching details and hues, no matter which page you land on. 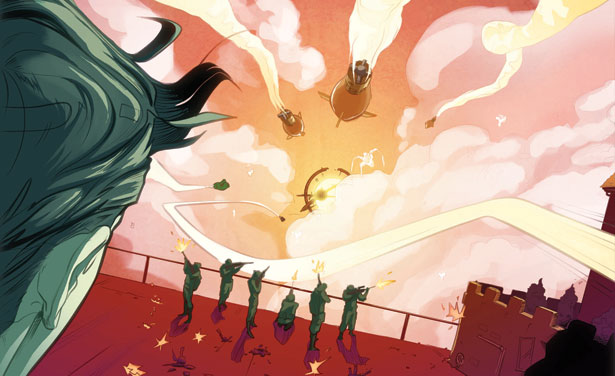 Virga and the machinations of its inhabitants remain a mystery by the last page, but some technical specifications of the colony are detailed in eight pages of additional content at the back of the issue. This includes the Virga Primer to gravity, some great concept sketches of a sun, and page layouts from one of the action sequences. Overall, it’s an enticing first issue that is unabashed in its grandeur, both through the ambitious scope of the story as well as visually. I felt a legitimate sense of wonder as I turned the pages, contemplating the world that Hayden lived in: its beauty, the scientific feasibility, and the story’s potential. I can’t recommend this series enough.

Check out the first twelve pages of Virga: Sun of Suns for free or buy it for only $0.99 on Comixology.