As we sit here in the dead of winter it makes sense to embrace a movie with lines like ‘You can learn to punch in the barn, but you have to learn to survive on the ice’ in a genre that is perhaps as old as the moving image itself. Youngblood certainly still knows how to rile up a crowd but is incredibly dated with its attitudes about our national pastime and particularly the violence that can erupt out of it.

Teenager Dean Youngblood (Rob Lowe) has pretty well out skated anyone who has stepped on the ice with him since the age of six.  Now with his sights set on fame in the National Hockey League, he’s earned a spot on the ragtag Hamilton Mustangs, and amateur Canadian team just across the border from his family’s farm.  Certain that his swift finesse moves and blazing speed will dazzle audiences he quickly learns that it simply won’t be enough against the bad boys of the league the Thunder Bay Bombers and when the Mustangs top scorer (Patrick Swayze) gets knocked out of the game, Dean has to transform himself from a rookie in over his head, to an all-star on the ice in more ways than one.

When it comes down to the sports genre of filmmaking, there’s a pretty predictable formula that you’d expect Youngblood to follow, which it does well enough but it also is brutally honest with the nature of the game and why at least in some circles fans pay to see the action on the ice.

Writer/Director Peter Markle was (and still is) a serviceable helmer as this came early on in his story telling career and crafts a narrative that while predictable still allows to get emotionally invested in the characters on the screen thanks to some strong character writing, even while some of the sports laden hokey dialogue tries to drown it all out.  Nothing going on in this film was ever meant to reinvent the wheel but the formula isn’t over baked and getting emotionally invested in the narrative isn’t that much of stretch.

The on ice action was pretty well done for the time and enough concern and reverence was actually paid to the nature of the sport to make sure that it didn’t feel too flashy or slapstick at times, everyone who was there simply loved the game, warts and all which the primary hurdle that Youngblood has to overcome.  We accept that in spite of the fact that now 33 years later and what we know about concussions and the physical risks playing the game.  In many ways as much as we love it, hockey (muchFionula like football) has always been about the marriage of the talent and the sheer brutality of the game.  It’s a modern day blood sport, and while you can debate if there’s something morally or ethically wrong about that, Youngblood is actually one of the first hockey movies to be genuinely honest about it which earns it some marks above some of the rest.

Rob Lowe coming off St Elmo’s Fire carries the movie well enough in an exercise that you have to feel was designed if could pull off anything other than the corny sex comedies that he broke into the business with.  He likeable and sympathetic even when he’s playing it all a little too whiny and petulant and it all works in the material as the film establishes him as a solid, but hardly flashy leading man.  Patrick Swayze coming off of Red Dawn and the North And South TV miniseries gets to have a little fun as the swagger filled but ultimately sage leader of the team Derek Sutton.  Lowe and Swayze play off each other well in a solid supporting performance.  Cynthia Gibb in one of her first on screen roles is solid as the plucky love interest, Ed Lauter makes us believe in the hard-nosed but ultimately big hearted coach Murray Chadwick while a barely recognizable Fiona Flanagan and a still wet behind the ears Keanu Reeves rounds out the ensemble cast. 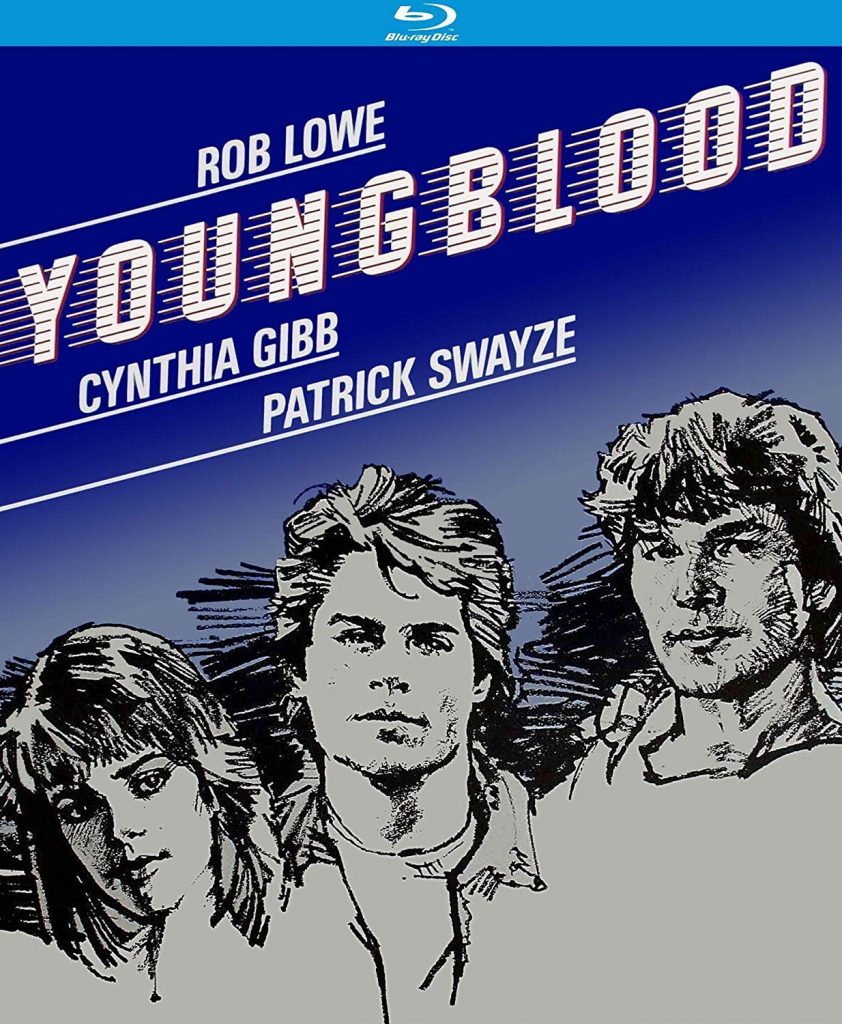 The HD transfer is a clean one on this new Kino Lorber Studio Classics release but nothing to light the world on fire either as the film does show its age just a little while the DTS 2.0. audio track is good enough to provide some oomph coming out any respectable TV or sound system.

The special features include a feature length commentary track from writer/director Peter Markle that was recorded for this release.  Markle does provide a little bit of insight and history behind it all but for the most part it just felt a little too drab for my liking.

There’s also the original theatrical trailer for Youngblood as well some other trailers from the time period also released by Kino Lorber; My Bodyguard, No Man’s Land & River’s Edge.

There’s no denying that Youngblood is hardly the best movie in the world but because it actually takes enough care giving audiences a certain degree of reality in the hockey world, I’d say it squeaks by as being ‘Shelf Worthy’ but probably only if you’re a hockey fan more than anything else.