Hello Internet friends! Welcome to a new recap! Last time we met, you learned about what our girls are up to in season three, but also about why I can’t honestly call myself an adult woman yet. Since I have an adult job, and I cook adult food (sometimes I marinade things!), you may be thinking, “Elena, everyone feels that way; you’re totally an adult.” Well riddle me this, Internet: Would an adult woman be able to pull a two-foot long lint creature out of her dryer? Because that’s a thing that happened today. I am a grown woman who was not aware of lint traps. In case you were wondering, I did not keep ‘Ol Linty as a grotesque pet. My roommate and I doused it with holy water and set it on fire. We can still hear it screaming.

Last episode, our resident British-American hippie got kicked out of rehab. Why, you ask? Well, Jessa decided to apologize to her vest friend Laura by helping her come to terms with her sexual orientation. How does one support a newly outed friend? Why, by going down on said friend! As Jessa’s counselor noted, this action was selfish—Jessa didn’t stop to think about how her attention-grabbing ways would affect Laura. Sorry Jessa, you weren’t being “charitable”—you were being an asshole. Thankfully, this asshole has friends who are willing to come get her.

In the car, Adam brings up a valid point: Why is the gang going to pick up an addict before she’s finished her treatment? Hannah counters with: “You just don’t understand the nature of female friendship!” To Adam, female friendship seems like a hysterical and evolving vortex of guilt and jealousy that keeps women from seeing situations clearly. On this show, Adam is right. The girls’ relationships are elastic enough to leave room for hurtful comments and passive aggressive exchanges. It’s not helpful that all of them let their frustrations stew and stew. Real talk: You’re not Ina Garten ladies. Take the metaphorical pot off the stove.

“But where is my favourite character, Marnie?” wondered no one. Well, I’ll mention it anyway. Marnie spent her brief appearance in the episode with everyone’s favourite new mom, Rita Wilson, who was busy making Marnie’s new shit box apartment smell like a Sephora instead of kimchi.

All you need to know is that Marnie thinks that Jessa is a big girl who can get out of rehab without her friends signing a release. Marnie has a point here. Jessa has broken the rules plenty of times; why does she need help now? WHY INDEED, Marnie. Now get out of here.

Back on the road trip, Shosh buys a chair for $14. 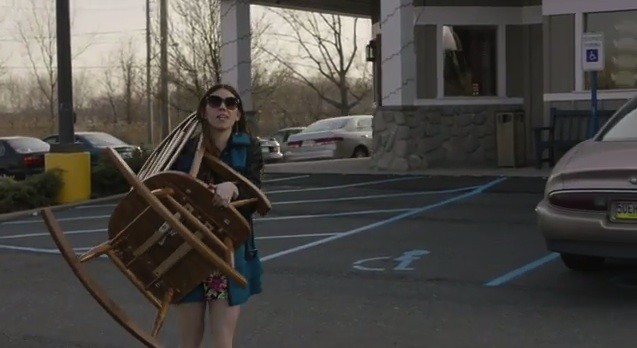 I have a few questions here. Firstly, where can I get this rustic piece of Northern Americana? Second, how on Earth will the gang fit this chair in a small four-door Sedan with Jessa in the back seat? The intrigue! The suspense! You’ve done it again, Girls. You’ve hooked me in with your mysteries.

Other Girls mysteries: Can I pull off Hannah’s haircut? [Answer: No; my face is too round; I would look like a pumpkin.] Is Laird bald under that beanie? [Answer: No; Google tells me that Jon Glaser actually has a voluptuous fro.]

Next up, Hannah, Shosh, and Adam are in a hotel room overnight, where the name of the road trip game is Truth or Dare. Adam has never played, which I find truly baffling. Add this to the list of Girls mysteries. Shosh sadly can’t come up with a good dare, which is how you played when you were a kid. Let’s be honest. You never dared adorable-in-a-non-threatening-way Justin to kiss you. And if you did, fuck you, man. I wish twelve-year-old Elena had been that edgy instead of bending to peer pressure and buying a baby blue velour tracksuit from American Eagle because it was the cool thing to do.

Despite the sexcident, Hannah and Shosh end up having a good heart-to-heart about Jessa before bed. From the conversation, we learn that college Jessa would dance on the quad in rain boots and a bikini and engage in that great American pastime of knife juggling. Despite these antics, Hannah remembers Jessa as being someone unable to be alone. Shosh, having lived with Jessa for a year, thinks that her friend is fine, in spite of… the binge drinking… heroin use… adultery… divorce… and rehab thing. I liked this scene because it built upon the special bond that Hannah and Jessa have. If we look back on the previous two seasons, Jessa’s vulnerable moments have had one thing in common: Hannah. Family visit disaster episode? Hannah. Depressing post-divorce bathtub soak? Hannah. Although Jessa can pull the wool over most people’s eyes, including her own, she can’t fool our little writer-in-training. Hooray for character consistency! What a novel concept (I’m looking at you, Glee).

Hannah: “College is the best! Your only job is to be yourself! It’s why I apply to grad school every year.”

Shosh: “Honestly, the only people that I hear say that are people who don’t make any money.”

Truth hurts Hannah. I mean, come on. Have you never seen lolmythesis.com?

The next day, Hannah is complaining that the road trip has been boring and too much like photos she’s seen on social media. God, that’s depressing. Apparently Adam shares this feeling, because he stops the car and takes the girls on a hike in order to find adventure. Hannah decides to take this moment and assert her independence, saying that exercise is her enemy, and that it’s liberating to say no to shit you hate. This is a fair point. Jessa’s drug of choice may be heroin, but mine is cancelling plans with people I don’t like all that much.

While in the woods, Shosh points out that Hannah is heavily dependent on Adam: “You just give and give and give like a saint. I mean think about it. What would she have done during this period of mental unrest if her boyfriend had been, like, an actual human being? Like, existing in society, who had, like, a job, or responsibilities, places to be during the day, or like… a best friend?”

Although Adam has a sweet response to the observation (“She is my best friend”), I can’t help but find Shosh’s assessment heartbreaking. Adam very much thinks that he’s found someone who understands and accepts him, psychological issues and all. While his eccentricities are a big part of why Hannah loves him, we’ve started getting hints that Hannah is not completely satisfied with Adam. Last episode, Hannah goaded her fella to spend more time with her friends, and stated that being in a relationship means having to change who you are. This indicates that Hannah doesn’t just want growth—she wants Adam to be different. Foreshadowing alert?

Back in rehab, Jessa is preparing to leave. During the episode, she bonds with Jasper, the older British patient (played by Withnail & I‘s Richard E. Grant) who gave her nuggets of wisdom last episode. Sadly, the man reveals that he gave the advice while high.

In case you couldn’t tell from the lizard shirt.

The revelation that Jasper thought his relationship with Jessa was leading to sex made me even sadder. Poor girl just wants to form bonds with father figures and they all end up being schmucks.

Feel that sympathy? Well, hold onto it for Jessa’s sake, because we later find out that Jessa didn’t need Hannah to come down and sign any release forms. Yep. The rehab centre has an open-door policy and she could have flown back to New York. It’s at this point that Hannah finally takes that pot off the stove and tells Jessa that constantly abandoning your friends and being this selfish is not okay behaviour for a friend. She then adds that she wishes Jessa would stop leaving. I loved Jemima Kirke’s performance in this scene. Her “I’m done will all of that” in response to Hannah was so touching that I myself wanted to comfort her.

This is one of my favourite Hannah moments of the series because 1) it shows growth (she didn’t fight this hard for Marnie’s friendship), and 2) it shows that she understands that what Jessa wants more than anything is someone who refuses to be pushed away.

Also loved the nod to Arrested Development by having Jessa ask Hannah what was happening during their hug. 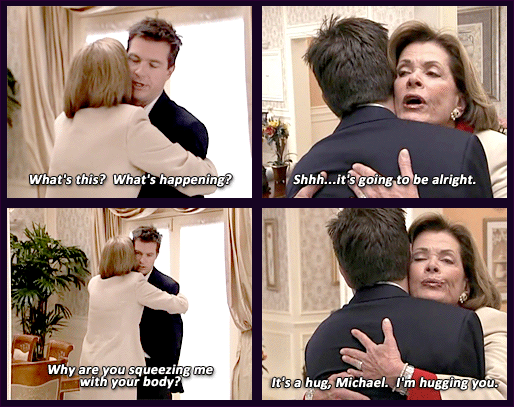 Now onto the moment I waited all episode for. We’re finally going to find out how they fit that chair in the car with Jessa!

Not in the back seat… 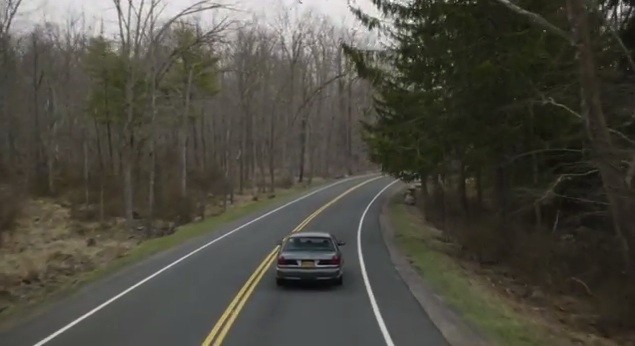 Not on the roof….

It can’t have possibly fit in the trunk…. DAMN IT.

Overall opinion: The episode was quite good, but I am taking big points off for whatever is happening to Shoshanna’s character.

Despite uttering some of my favourite lines in the episode, our favourite Jewish-American Princess is losing brain cells fast. I’m talking Rose Nylund, Homer Simpson, Kevin Malone, and that redhead from That’s So Raven fast. Back in seasons one and two, Shoshanna was one of the most rational characters. Now she thinks periods are a valid reason why a woman couldn’t be president? I’ll let Shosh herself field this one:

Let’s hope that the writers bring our sassy girl back from the brink of an aneurysm.

Favourite line of the episode: Goes to Shoshanna, with “Adam was there for you when you totally went batshit insane and like, you decided to cut your hair off like a little boy on a fancy cookie box.”

Episode grade: Three and a half adult children out of five.