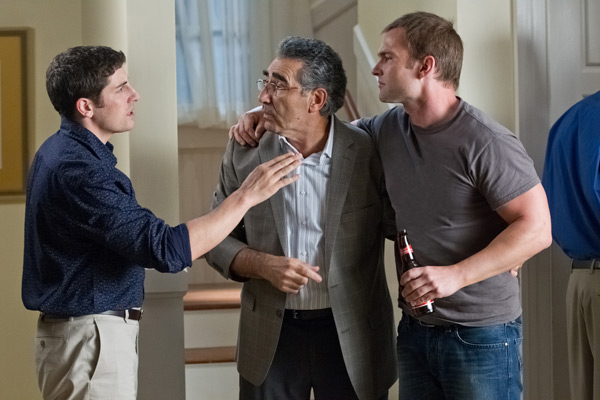 Sometimes you just can’t go away for a decade and hope to return home to things feeling the same way you left them. That particular life lesson proves painfully true in American Reunion, the latest in the now stale and crusty American Pie franchise. Only sporadically funny, but mostly dull and surprisingly insincere given the three previous films emotional weight, new directors Jon Hurwitz and Hayden Schlossberg (writers of the Harold and Kumar films) fail to reignite a concept that already seemed to have a very logical conclusion.

There’s no plot to speak of over the unconscionably long two hour running time, but rather just a bunch of character arcs crammed into one movie. Unlike the other films, there’s no unifying theme here, but much like an actual reunion the first 45 minutes or so play out like a “where are they now” episode of a show no one really asked for. Jim (Jason Biggs) and Michelle (Alyson Hannigan) are still happily married with a child and devoid of their youthful sex drives. Kevin (Thomas Ian Nicholas) finds himself whipped into being a house husband. Oz (Chris Klein) has become a sports commentator and former celebrity dance show contestant with a hard partying model girlfriend (Katrina Bowden). Finch (Eddie Kaye Thomas) is a loner because the movie just seems to have run out of attributes to give to characters, and franchise favourite Steve Stiffler (Seann William Scott) works a soul crushing finance job for a boss (Vik Sahay) that’s an even bigger douche than he is. (Even in though the direct-to-DVD movies, which are clearly canon thanks to Eugene Levy’s repeated involvement in them as Jim’s dad, clearly stated that Stiffler was now a porno director and that the other three movies clearly made him out to be a moron, but whatever.)

They all come back home for their “tenth” reunion (technically their 13th) for little to no reason other than to rehash some tired gags and find excuses for well placed cameos. Oz and Kevin are forced into confronting the girls they left behind (Mena Suvari and Tara Reid, respectively). Jim and Michelle continue to fall into comedic sexual misunderstandings that drive a wedge into their relationship (for which their kid hardly ever gets used and is generally forgotten about for most of the film). Jim’s loving father has to finally look to his son for advice about dating following the death of his wife. Stiffler has to adjust to the fact that it’s not 1999 anymore, and Finch develops a healthier crush on a former band geek turned bartender (Dania Ramirez) instead of on Stiffler’s mom (Jennifer Coolidge). Oh, and Jim also has to contend with an amorous 18-year old girl next door (Ali Cobrin) who inexplicably wants to lose her virginity to him because he used to babysit her.

Other than the really creepy and desperately unfunny subplot with Jim, everything else registers as a near complete flatline. Biggs, Nicholas, and Thomas seem bored out of their skulls and seem to be mentally counting the zeroes at the end of their paycheques. Hannigan seems to have forgotten how to play her character from the previous films entirely, but she still has more screen presence than Suvari and Reed who have absolutely nothing at all to do except to make the film longer by about 6 to 8 minutes. Then again, none of the supporting cast of new characters have any relevancy to how the film will ultimately end.

Scott, Klein, and Levy are actually trying to make this dreadful script work, though. Klein gets to blow off some steam with a slightly goofier character than his former jock used to be. Levy tries to inject some sadness into his role as a widower and gets the film’s most genuine laughs when he gets wasted at a party. As for Scott, it’s kind of admirable just how endearing Stiffler has been over the course of four films despite arguably being the character that’s progressed the least since high school. Also arriving in a beefed up role and making it his own is John Cho, who played a nameless kid espousing  the joys of MILFs in the first film that just so happens to be planning this big reunion.

The opening part of the film contains nothing but deathly uninteresting set up for about an hour, followed by maybe 15 minutes of genuinely funny material, before reaching the most obvious and unsurprising character arc conclusions in a laughably bad “serious” resolutions to a comedy thanks to a terrible choice of background song that not only doesn’t make sense, but makes it seem like Hurwitz and Schlossberg have no clue how to handle sentimentality with any dignity at all. They can shoot a gross out gag just fine, but actual wit and emotion seem like foreign concepts.

The actual reunion of the title becomes such a let down because the first three films had genuine heart and warmth amid the gross out gags. At the end of the previous entries, the audience felt good and happy about the way things turned out, and if something didn’t go exactly right, there was something to be learned from it. No one in American Reunion learns a damn thing and the audience doesn’t have a reason to care. Boring, forced, and utilizing only the most tired of sexual innuendos and gross out gags, I can’t even remember the parts of the film I actually laughed at. I remember the first one took about 30 minutes to arrive and that there were several other instances, but then again, if the team behind this one doesn’t care to do anything interesting with these already proven characters, why should I be asked to remember the punchlines?