Despite what your grandma might say to try and trick you into watching reruns of Perry Mason, the true ‘Golden Age’ of television is right now and 2010 was an especially good year. Returning favourites like Mad Men and Dexter continued their hot streaks while AMC’s new drama The Walking Dead kept us on the edge of our seat and prepared us all for the impending zombie apocalypse. In comedy, FX’s Louie made us laugh AND think while Sarah Palin’s Alaska on TLC kept us all in stitches. That was a comedy, right?
– Kathleen Corrigan

Hands down the best new TV show this year has to be HBO’s prohibition-era crime drama Boardwalk Empire. Produced by Terrence Winters of The Sopranos fame and some other dude named … ahem… Martin Scorsese, it also stars the incomparable Steve Buscemi who is finally ready for his close up. As good as he is at playing the quirky second, it’s about time he got the chance to shine in a lead role and here he does it brilliantly.

Set in Atlantic City in 1920, Boardwalk Empire follows the exploits of two-faced politician Nucky Thompson (Buscemi) who single handedly is keeping the town well lubricated despite the recent ban on alcohol. While he isn’t exactly new to corruption, Nucky soon learns that he “can’t be half a gangster” and that rum running is a messy business. This show delivers on all the good stuff: Sex, violence, booze, outdated racism, gangsters, self righteous and self-flagellating federal agents, a World Series fix, a PTS plagued sniper with half a face… should I keep going? It also has arguably the strongest cast on television right now. Buscemi is supported by some stellar actors with some impressive credits like Kelly McDonald (No Country for Old Men), Michael Stuhlbarg (A Serious Man) and Michael Pitt (Funny Games) to name a few.

Having said that, Boardwalk Empire isn’t a show for the impatient or the faint of heart. If the slow, character-driven plots of Mad Men make you yawn or the ruthless bloodshed of The Sopranos make you squirm, this show probably isn’t for you. But everyone else – bottoms up! – Kathleen Corrigan

It was in 2010 that Community’s true purpose became clear – spend the first half-season developing relationships and deepening characters, so that the show could then be stretched in any manner conceivable. At the onset, who suspected that NBC’s modest ensemble comedy could support episodes devoted to an elaborate action movie homage (ie. “the paintball episode”), zombie films, a wholly self-aware “bottle episode”, a bittersweet meditation on drinking, and a pitch-perfect claymation Christmas special? Whether in it’s “theme episodes” or just regularly hanging out with he Greendale gang (or should it be “Greendale Human Beings”), Community manages to consistently balance pop-culture self-awareness and solid, emotional character comedy to be the funniest show on network television. – Ian MacIntyre

This year HBO reteamed with The Wire creator David Simon for the post-Katrina drama Treme. The series is as much a meditation of Bush-era America as it is a thoughtful collection of overlapping character pieces. Many have criticized the New Orleans-set show’s dour tone — the lives of its characters are in as much disarray as the still sopping, half-ruined city — but for every crushing blow the characters of the Treme receive, there is always the food and music that make N’Orleans great to pick them and you the viewer up. If you aren’t a fan of dixieland jazz, Bayou fiddle and Louisiana cuisine after watching Treme, you’re inhuman.

The sprawling and excellent cast includes Melissa Leo, Steve Zahn, John Goodman and Kim Dickens. While the presence of Wire vets Clarke Peters and Wendell Pierce is also a bonus; the two are even better in Treme, and that’s saying something.

The social and political commentary prevalent in Simon’s other work shows its face here too, but he never hits you over the head with it. In a year of really great TV, Treme distinguished itself as something different. – Will Perkins 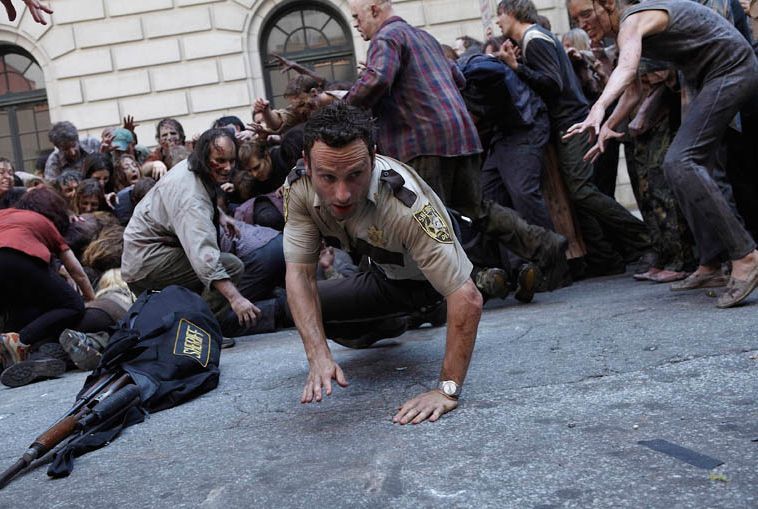 AMC’s zombie-pocalypse series had a lot going for it: great source material, great writers and directors, a great cast and a network willing to take chances. That said, as much as I enjoyed the first season (miniseries in reality) of The Walking Dead, it was really more of an experiment than anything else. Could anyone pull off a zombie apocalypse TV show?

Make no mistake, The Walking Dead is something special. I only wish it had had more time to develop and establish its characters. Six episodes were clearly not enough to tell the story the show wanted to tell. They tried though, and thankfully high production values and solid execution make the first season of the show worth checking out. However, many peripheral character moments fell compltely flat because the audience simply did not have time to get to know the characters.

The show did succeed where it mattered, the Rick Grimes storyline was fully realized, or as realized as it could have been in just six episodes. Hopefully with 14 episodes on the production block for season two, Frank Darabont and company will give the audience the opportunity to explore some of the other characters that made The Walking Dead comics so enticing. – Will Perkins

Louis C.K., my favourite stand-up around these days, brought his brute honesty and self-deprecating humour to the FX network this year with what I am willing to deem the freshest thing on TV. Apart from bits of him doing his comedy routine interspersed throughout, this show is unlike anything we’ve seen other comedians do in the past. In some episodes, the stand-up bits act as comic relief between long, somber scenes, like one where Louis tells a friend he sometimes thinks he’ll commit suicide after his youngest daughter turns 18 because being a father is the only way for him to justify his existence.  C.K  (also the show’s creator, writer, director, producer, etc.) has gone from candid to soul-baring, but still makes us laugh at the sad truths of his life as well as our own. – Noah Taylor

This season took a well earned break from the insane pacing of the first two, yet still had some of the series’ best moments to date. This is the only show I try to keep up on for fear of having recent plot developments spoiled. – Noah Taylor

Perhaps the fact that Starz is not known for its original content hindered this show from finding its audience, ultimately leading to its premature cancellation. With its clever format, unlikely guest stars, excellent ensemble cast and capable writing team, every episode produced at least one solid guffaw. – Noah Taylor

Writer of fan-favourite episodes such as “The Empty Child”, “The Girl in the Fireplace“, “Blink” and “Silence in the Library”, Steven Moffat’s inventive story-lines, original characters and terrifying monsters shattered all expectations of what a Doctor Who story should be, gaining him an incredible following. On paper, Moffat was the right and proper choice as the successor for show-runner Russell T. Davies, and 2010 was the year where he proved it to all the naysayers.

With the eleventh incarnation of The Doctor (Matt Smith) and companion Amy Pond (Karen Gillan), Steven Moffat hit the ground running, and created one of the most entertaining collections of episodes in Doctor Who history. I have never understood what people meant when they said who was “their” Doctor — but, with Moffat and Gillan close on hand, it is very clear to me now that Matt Smith’s “my” Doctor. – Sasha James

In England, it could be said that 2010 was the “Year of the Moff”. With a critically-acclaimed series of Doctor Who under his belt, writer and producer Steven Moffat decided to take a crack at another British institution: Sherlock Holmes. You shouldn’t expect a houndstooth-wearing, pipe-smoking Sherlock. No, this Sherlock communicates excessively through text messages. Oh, and Watson? Yeah, he’s an injured veteran of Afghanistan with a limp and a blog. This is not your grand-daddy’s Sherlock Holmes, and it’s all the better for it. – Sasha James

Director Michael Winterbottom reteams with partners in crime Steve Coogan and Rob Brydon for the BBC series The Trip. The six-episode road show follows the two comic actors on a restaurant tour of Northern England. Coogan and Brydon play fictional versions of themselves, eating and talking, joking and philosophizing their way from hotel to hotel, from restaurant to restaurant. Coogan’s character has a successful, but ultimately unfulfilling acting career, and struggles with drug abuse and womanizing; while Brydon’s character, despite his chipper bearing, laments being seen as a one-trick pony and comes to terms with his new life as a family man.

The two previously worked with Winterbottom on the film Tristram Shandy, and the series shares the same wry tone that made that film so funny. Shot in a fly-on-the-wall documentary style, The Trip allows Coogan and Brydon absolutely shine. Coogan’s glib and dour demeanor provides a perfect counterpoint to Brydon’s unabashed happiness and humour. Both comedians are also incredible impressionists and imitators, to hear them go back and forth as Michael Caine or Sean Connery is uncanny. – Will Perkins