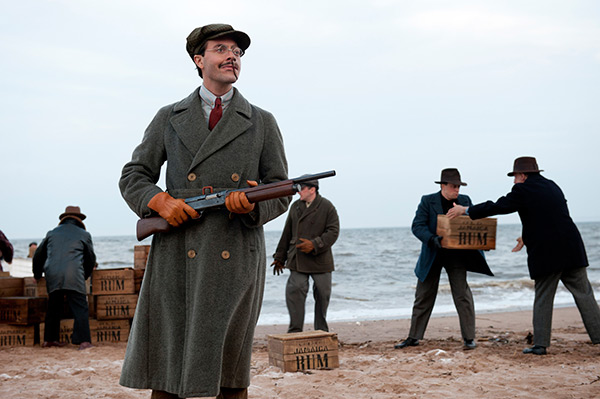 With the exception of Nucky’s confrontation with the Commodore and Jimmy in the restaurant, the third episode of Boardwalk Empire‘s second season is the least eventful of the episodes we’ve been treated to so far. Titled “The Dangerous Maid” for Katie, Margaret’s maid, who at this point “knows too much,” the episode is preoccupied with Nelson’s functional imprisonment of Lucy and fully fleshes out her resultant desolation, but otherwise, it’s a table-setting episode.

The dichotomy drawn between Nucky and Van Alden is stark and tough to miss. Nucky may “order people murdered and fix elections” as Van Alden quite rightly says, but Van Alden is no saint either – and “at least Nucky was fun.”

That Nucky is fun, or more accurately, both generous and highly empathetic, is undeniable – just try to return your fancy clothes as a cost-cutting measure and see how he reacts. When Nucky realizes his wife Margaret is upset about the discovery that her family is in America, he offers her the world, or more precisely Paris, saying “it’s important to always have something to look forward to.” When Margaret is troubled that her recently discovered family wants nothing at all to do with her, Nucky takes her out on the town and plants a big, wet kiss on her upon their return, “I don’t ever want to see you sad again” – he says.

Van Alden on the other hand has cut Lucy off from the outside world, he has forbidden her to talk to anyone and has denied her any and all of life’s joys, simple things like “some conversation, a little music,” which, Lucy understandably craves. “What you might want… can’t be allowed” Nelson tells Lucy when he finds her reading a script and fantasizing about a return to the stage. Hard to imagine Nucky denying anyone their desire,  much less the mother of his future child.

Lucy’s suffering reaches its climax when she stands at the top of the stairs and agonizes about whether or not to throw herself down them – a horrifying way to abort a pregnancy. I found that excruciating to watch on my first go through. Luckily, Nelson has relented, and perhaps taking the bootlegger Doyle up on his advice “treat a Queen like a whore, and a whore like a Queen,” has purchased Lucy a record player so she might enjoy some music in her captivity. When Nelson returns and sees a pregnant Lucy swaying to the music, his face is tough to read, but I think the absence of snarl indicates that the repressed IRS agent is inflamed.

Margaret’s family has moved to Brooklyn according to the Pinkertons (I’m pleased the world famous detective agency has finally made an appearance – I expect we’ll see them again as the series unfolds) and appear to want nothing to do with Margaret Schroeder – or should we say Peggy Rowan. Margaret has Katie the maid contact her family in her stead – Katie is perhaps a bit too quick for her own good, and explicitly uncovers the truth for us at the end of the episode. Katie has, it seems, taken Margaret’s order to “drop the formalities” to heart and grabs her mistresses arm while asking an absurdly personal question – Katie may be quick, but she’s clearly unwise.

Owen Slater seems to be developing into a bad-ass, and that’s certainly timely for Nucky. Slater comes to Nucky with a bold pitch and an offer to cause some particular people a whole lot of pain on behalf of his American benefactor. Slater then intervenes on Nucky’s behalf, and prevents his employer from purchasing liquor from Richard Harrow. The scene, in which Slater bashes a couple of Harrow’s henchman and seems to reach Richard with a combination of respect and straightforwardness – is likely the tip of the iceberg in terms of what we can expect from Slater going forward.

Harrow in this scene strikes me as a bad fit to be Jimmy’s lieutenant. Just doesn’t seem to be enough of a hard-ass. Whereas last season Richard’s particular way of breathing and playing with his mouth came off as sinister – this season he is conspicuously pitiable. When Capone called Harrow Frankenstein last season, it was a fitting name for a scary assassin; when he does so this season, it’s a cruel and unnecessary jab at a sensitive fellow. This transformation in Harrow’s portrayal has made for some good television – but I don’t know that it will benefit his bootlegging efforts.

The conspirators Jimmy, Eli and the Commodore may have money at their disposal and some enviable political connections (The Governor, the Coast Guard) but they don’t seem to garner a lot of respect. The conversation with Nucky’s captain McCoy goes awfully and he calls them out individually for what they are – traitors. Eli doesn’t even have the respect of his father, who though old and confused still manages to call him an idiot. Poor Eli. The scene at Eli’s house, with his wife and plethora of children — the count has to be in double figures — underlines the stakes involved for Eli. Though Eli’s father is battling senility and McCoy ends up having his ships confiscated when the Commodore calls in the coast-guard – their mistrust and hostility towards the group bodes poorly for them.

As do Jimmy’s doubts – about his father and what he wants in life. Both Capone and the Governor ask Jimmy if he’s “following in the footsteps of his old man” and Jimmy is hostile to the idea on both occasions. He even tells his mother “sometimes I think I’d be better suited to a simpler life.” He also comments that the Commodore’s dyed hair “looks foolish” and questions how his mother can forgive the man she’s spent most of her life referring to as “the lech.”

The confrontation scene in the restaurant is awesome – and is the worst portend of all for the conspirators. Superficially it seems, they’ve won the day – they’ve successfully embargoed Nucky’s liquor supply, and they’re sitting at his table in his usual restaurant with the Governor of New Jersey. They even got the last of the Lobster Thermidor. When Nucky confronts them, however, it’s clear who still holds the chips.

Nucky savages the Commodore, pledges to ruin all of them and drives a wedge between the conspirators by bringing up the simple fact that the Commodore is barely a father to Jimmy. Their only connection is that Jimmy is the product of the Commodore having raped his mother, a fact that pre-occupies Jimmy, “He never even asked her name.”

When Nucky returns home, the help remarks “well he’s in good spirits!” Jimmy on the other hand is shown chain-smoking, and drinking alone. When his wife comes and asks him “how was dinner with your father?” Jimmy answers tellingly, “which one?”