In the everlasting icon wars, Mickey Mouse remains a universal familiar; Symbol of mixed ideology and butt of easy Disney slander jokes. Originally the rival and victor of tiffs with Fleischer Brothers and later Looney Tunes, Mickey Mouse has risen to become an empire unto himself with unfading pop culture significance. And yet, there isn’t very much to the character himself, even compared to his fallen enemies. While Mickey Mouse’s significance in social history and image culture is as deep, if not the deepest, the Mouse himself isn’t renowned for flowering personality. The Mouse is pretty much clay, and while there are certain traits, playfulness, curiosity, bravery, friendliness, there’s only a vague distinction of where this mouse is really coming from, a massive difference from asshole trickster parallel Bugs Bunny. Which is what make’s Warren Spector’s crack at the Mickey mythos as interesting as it is weird in his anticipated and ambitious take on the mouse, Epic Mickey. It’s a strange direction for both the cherished cartoon and the respected designer, but it’s clear that the two forces have found a comfortable middle ground for creation. Be that as it may, is Epic Mickey as successful as its starry eyes wish for?

Mickey has had to deal with ruffians and dastards plenty of time, but in an apparent ‘secret tale’, Mickey finds himself at odds with a slightly more complicated foe. Regret. Accidentally provoking a double offense against familiars and strangers alike, Mickey spilled a bottle of paint thinner on a strange draft discovered on the other side of his looking glass. Dashing off before he was discovered by the wizard Yen Sid, what Mickey had unknowingly done is ravage an alternative Disney Land, one created by Sid for the forgotten and unwanted members of the Disney family, ones put there primarily because Mickey Mouse himself had overshadowed them. Far later and far deeper into Mickey’s stardom, a strange gooey monster breaches the mirror the mouse had explored long ago, kidnapping him and relocating him into the now grisly reflection of the beloved Magic Kingdom. It’s a very interesting interpretation on some incredibly trodden ground, sometimes grazing the edges of gimmicky and tacky but surprisingly never overzealous. Because the concept is pop culture manifesting itself, it delivers an uncanny frame for some of the neglected cast and crew, especially supporting character Oswald the Lucky Rabbit who historically did become very close to that incomparable fame.

With the overall objective of escaping the off-kilter kingdom, Mickey Mouse must complete many tasks and adventures throughout a variety of worlds, be it menial tasks for locals of Mean Street (alternate Main Street) and Os Town (alt Toon Town) or traversing the adverse landscapes of mirrored Tomorrowland, Adventureland, and one mountain made entirely out of discarded merchandise. Mickey goes about the tasks through some basic platforming but primarily through the use of his magic paintbrush, which with paint and thinner gives the player the ability to create and destroy both the literal and existential. As well advertised, your moral compass is a constant driver, and while consequence is usually the difference between immediate satisfaction and marinated reward, the path to these consequences are something to be taken note of. Many choices will be obvious, taking the time to perform a scavenger hunt will earn you more friends than dropping a safe on a dopey pirate’s head (you’ll see) but others, and these are the ones that will pinch your toes, are decisions made not through action but apathy. There are sequences where simple timing or forgetfulness supersede active aggression, characters asking for a chore to be done may have stricter time limitations than so casually assumed by an average player.

Bosses and enemies also have alternate routes, enemies can be nullified with thinner, though using paint can befriend them and call them to your aid. Most bosses simply ask for you to make a choice between showering them with friendly goo or antagonizing goo, but the more interesting and interactive ones will require entirely different methods to define your consequences.

The game has a foundation of really brilliant ideas, but certain angles of the execution do bog it down with some tedious frustration. While I do like morality based on your enthusiasm for the cause, I don’t like the feeling of having a door shut on me without reason. Mean Street is the main hub, but for some unexplained reason portions of the overall world will be blocked off after first access, regardless if you’ve managed to plunder all the necessary and plentiful collectibles and alternative quests, and this is only made more wearing because other sections are not, creating a sense of loss and doubt about the world by the player. I’m a big fan of platforming greats like Banjo Kazooie or the 3D Mario games, giving players large playgrounds with plenty of interaction and all the time in the world to do it, and with such a unique world offered by Epic Mickey, it’s a dirty shame that return trips can be abruptly denied with no justification. I actually do like the LittleBigPlanet style 2D sequences that are used as segues between worlds, they feel like the completed and coherent execution of SNES meddler Mickey Mania, finding interesting use of material from old cartoons that, may not make for amazing platforming, but will satisfy visually. But that sensation runs dry on the twentieth repeat, as  you will be asked to repeat some of the segments well over a dozen times. 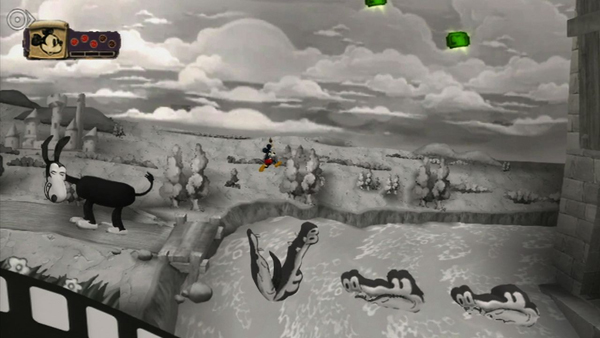 Another major gripe, and one you’ve probably heard about by now, is a camera that refuses to cooperate at the frequency of a heartbeat. There is limited control over the camera, there’s a back-lock and a first person view, but the game gives itself the courtesy of shotgun and doesn’t do a very good job navigating. Often, very often, the camera gets hooked on some faraway object, wedged between portions of the map and a constant pain to deal with. Even the first person mode, which should be the first choice for paint slinging accuracy, is marred when paint freely becomes blocked by odd and obscured bits of the floorplan. In a normal platformer, this would be closer to excusable, but in a game which completely relies on you aiming the remote on specific parts of the screen, it’s a huge issue.

Epic Mickey isn’t the Disney hail Mary of a game many had hoped for, due mainly to a handful of aggressive grievances. But as far as some refreshing takes on overused design tactics, and a fantastic artistic direction with a property you had assumed to know everything about, Epic Mickey is defiantly a looking glass worth stepping into.