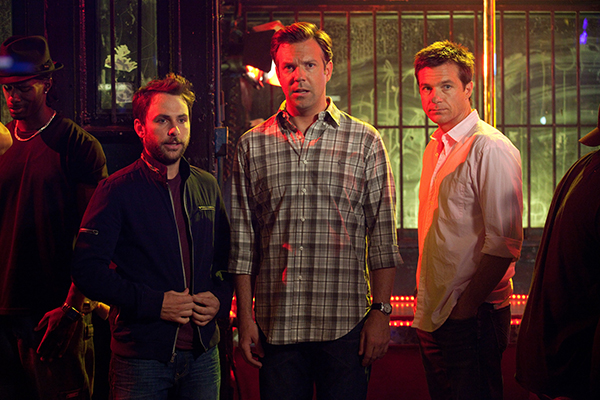 Three middle aged guys (Sudeikis, Day, Bateman) have a typical complaint: they hate their bosses. These bosses, however, are not just the annoying kind, they are the life destroying kind. They include coke-head Colin Farell, rapist-in-training Jennifer Aniston, and soulless businessman Kevin Spacey. The three friends – who happen to be really normal white people without any other problems – decide they can no longer endure life under the pressure of their irresponsible bosses. They come to the conclusion that the only solution to their woes is to kill their respective employers. But how do three normal white people DO that? With that question in mind, our characters begin planning the murders… which obviously begin by consulting a black man.

The movie does a great job at being good despite an underwhelming premise. It is one of those films that succeeds by virtue of its casting. Jason Sudeikis, Charlie Day, and Jason Bateman have made a living playing funny straight men: people who want to be normal but their environment won’t let them. They do a great job with the dialogue which has that fast, overlapping, improv feel. Their chemistry is great and their comic timing is perfect.

Their bosses are also well played by Aniston, Farrell, and Spacey. As their bosses, Spacey and Farrell have asshole and sleazeball nailed down (respectively), but who knew that Aniston could do anything other than angsty blond girl? There is something about middle-age that works for her. She’s not some 30-something teenager struggling with romance. Now she’s older, she knows what she wants, and she will slowly, calmly, blackmail her employee into giving it to her.

Horrible Bosses doesn’t skimp on the cameos either, providing thirty seconds of screen time to a pair of legends. Jaime Foxx also has a small recurring part as murder consultant. It’s kinda funny which is probably the best that it could have been, so, good job!

The script keeps the pace well. The first act feels a bit rushed, but with a title that easily describes the premise, that’s probably a good idea. Once the trio decides to do the deed, it crams the whole caper into forty-eight hours of firsts: break-ins, thefts, shootings, etc.

So, the film is good. I’d call it a rental, unless you’re really into swearing or a near-naked Jennifer Aniston. If that’s the case then you can pay the money. You’re going pay the money aren’t you?