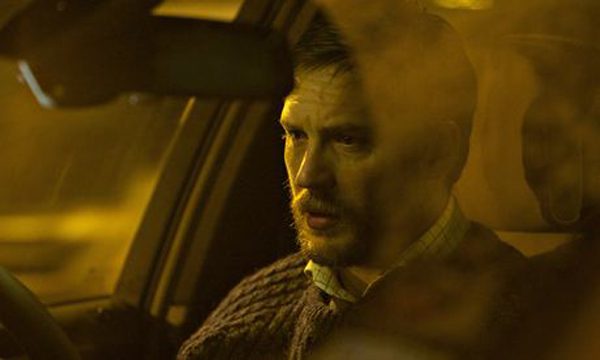 Steven Knight’s single setting and single actor drama Locke is what it is without much to really talk about, but it’s also quite good. An existential and rationalist drama set within the confines of a single car while a man’s life crashes down around him, Locke is the kind of film that’s more astutely performed and directed than it is anything to talk about outside of the obvious. It’s an experiment in everything people are told not to do as screenwriters and actors done by people setting out to prove that conventional storytelling norms are sometimes incorrect.

Ivan Locke (Tom Hardy) starts off his evening as he’s leaving his job as a construction foreman, hopping in his car and making his way ninety minutes or so along the highway to get to London. The first thing he does is call into work for the following day: something that doesn’t go over well because he’s supposed to be overseeing the largest pouring of concrete “outside the military and nuclear power” for the construction of a skyscraper he’s taken a lot of pride in. He also calls his two sons at home to say he won’t be home to watch the football match and that he has something important to talk to his wife about. The purpose of his trip is to make his way to the bedside of a woman who isn’t his wife that’s about to give birth out of wedlock with no friends and no support system to help her.

Never leaving the car and always having people talk on the phone are two things that screenwriters have always been taught to believe as being terrible things that will kill the flow of a narrative. They’re often seen as expository devices designed to literally and figuratively move the story from point A to point B. Knight, himself a veteran screenwriter behind such films as Dirty Pretty Things and Eastern Promises, has found a way to make this often derided method of storytelling work by making sure that it’s the only way the story can be told. And no, it’s not a thriller in the vein of something like Phone Booth where the film will pull back or have things go on around the main character’s actions. Ivan is on a deeply focused journey that grows frustrating out of human drama rather than manufactured set pieces or even traffic snarls. The journey is meant to be unremarkable, but the change in Ivan’s personality is the entire reason for the story to exist.

Knight’s direction remains purposefully tight (in all seriousness, though, he really has nowhere else to go), but his screenplay is even more precise. Everything Ivan does in his personal and professional life has to be spelled out to the letter or he fears bad things will happen. The journey he’s on at the moment feels like he’s flagellating himself for the one moment in his life he ever let himself go off and do something spontaneous and irrational. He’s a man who has studiously avoided anything that could have long standing consequences on a night where time has conspired against him. He’s forced into taking a hard look at his life, but his manners and rationality won’t allow him to believe that there’s a chance things will end up terribly by the end of the night. There are a few moments of obviousness, particularly regarding Locke’s job and the film’s theme of “cracked foundations” as exemplified by conversations talking about the nature of concrete, but thanks to the film’s structure there’s never a ton of time to dwell on the more blatantly symbolic points of demarcation for the journey.

Knight’s focus is matched brilliantly by one of Hardy’s best performances, which should go without saying since he’s the only person ever on camera. Whether he’s talking about pouring concrete to his alcoholic and skittish second in command, begging his wife to let him come back home the following morning, or trying to explain to the mother of his new child why he doesn’t love her, Hardy elegantly shows Ivan’s though process without ever cracking the veneer of calmness the character has been delicately cultivating his entire life. The movie assuredly rises and falls on Hardy (and to a certain extent the voices on the other end of his hands free mobile, which include Olivia Coleman, Ruth Wilson, Alice Lowe, Ben Daniels, and Andrew Scott), and his reading of Knight’s words like a one man King Lear is one of the most pleasant 90 minutes at the cinema so far this year.

It also helps that Knight knows precisely how long he can keep his film going. Instead of trying to map out a conclusion that will wrap things up nicely, the film ends poignantly in a place no one would expect. It’s a twist, but not really. It makes the rest of the film feel lived in instead of a cinematic experiment. It’s a smart and simple movie that proves that not every film involving a tough looking actor and a flashy car needs to be bombastic to succeed.