Master Z: Ip Man Legacy has the perfect setup for a pulpy martial arts crime flick. The story features crooked cops, seedy criminals, and an anti-hero on the path to redemption. And each of these opposing forces quickly resort to solving disputes with glorious acts of violence. Action movie junkies can look forward to a parade of thrilling setpieces, while Ip Man series diehards will find a solid film that barely resembles their beloved trilogy.

Master Z follows Ip Man 3 baddie Cheung Tin-chi (Jin Zhang). Tin-chi left town after receiving a beatdown from Wing Chung master Ip Man. Master Z finds him initially working as a mercenary, before leaving the world of martial arts behind for good. Tin-chi settles down and opens a grocery shop, where he can focus on spending more quality time with his young son. But things don’t stay quiet for long.

He crosses paths with a young woman named Julia (Yan Liu) as she’s protecting her drug-addicted friend from a gang attack. Tin-chi saves the young women but draws the wrath of the petulant crime-boss Tso Sai Kit (Kevin Cheng). After Kit firebombs Tin-chi’s home, he’s forced to stay with Julia and work for her brother Fu (Xing Yu), a fellow martial artist who now runs a bar on Bar Street, the most crime-ridden part of town. Despite wanting to leave martial arts behind, Tin-chi must keep fighting to protect his son, his new friends, and his honour.

Master Z is a buffet of delicious crime flick staples; a mobster trying to go legit, a police force under a crime lord’s thumb, and even a mysterious man in black (played by the Tony Jaa). This film, with all its Goodfellas aspirations, doesn’t take itself seriously, and it’s a better movie for it.

The original Ip Man movie offers a satisfying balance of action and drama. The film tells a heartfelt story punctuated by explosive fights. As the series went on, it became clear that the story was only there to string together epic combat sequences. The physics of Ip Man brawls look more like rounds of Street Fighter than real life. But the previous three movies feel much more grounded than Master Z, a film whose physics fall more in line with NBA Jam.

If you’re looking for action, you’ve come to the right place. Master Z’s director Woo-ping Yuen is an action movie legend. Over his storied career, he crafted some of the most stunning action sequences ever put to film. American audiences will recognize his work in films like Kill Bill, The Matrix, and Crouching Tiger, Hidden Dragon. And if you enjoy those films, then you should check out Iron Monkey, Tai Chi Master, and of course, Drunken Master. Even at 74-years old, Woo-ping is still delivering action sequences that outshine most Hollywood movies.

Master Z features a handful of brawls that are each worth the price of admission. One scene sees Tin-chi take the fight up into the neon-lit signs hanging over Bar street, the story’s primary locale. Combatants leap between signs like spider-monkeys while unleashing furies of punches and kicks. Street signs explode as men careen off them like pinballs. I’ve never seen anything quite like the sequence’s, Crouching Tiger meets Blade Runner look. 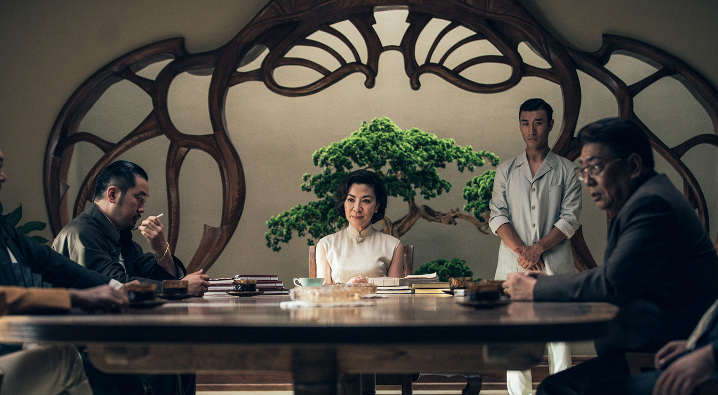 David Fu and Seppe Van Grieken’s eagle-eyed cinematography does an excellent job keeping track of the action. You don’t lose track of what’s happening on screen, which is no easy feat considering the whirlwind of feet and fists this film throws at you. And when things do slow down, their camera soaks up every inch of the picture’s stellar production design.  It’s a good thing Master Z looks so striking because it’s light on character, even though it’s heavy on plot.

The film is comprised of thinly sketched characters. The heroes defend the weak, and fight as a last resort, and the bad guys are ruthless worms. They’re easy to root for and against, but they’re not interesting characters.

Master Z uses violence against women as an easy way to make you despise its villains. It’s fair game when a man attacks a woman like Michelle Yeoh’s Tso Ngan Kwan because she’s a bad-ass fighter who can hold her own in a fight. The problem is that the film brutalizes defenceless women as a way to move the plot along. It’s cheap and lazy, and there are better ways to piss off the heroes than to mess with their ladies.

Tin-chi is fun to watch in a fight, but that’s about it. He engages all of his foes with steely calm, and you believe he could fight a hundred machete-wielding men without breaking a sweat. The way he unloads on baddies with fists of lightning and feet of thunder is a sight to behold. The problem is that he looks so cool while doing it.

A cool character is rarely an interesting one. The most compelling action heroes are the ones who barely make it across the finish line. They scrape through slugfests by the skin of their teeth. Tin-chi is never in danger of losing a fight, and you don’t feel a sense of exhilaration when he wins, either. Give me a banged-up John McClane or a hobbled Ethan Hunt any day.

One of the film’s highlights is Yeoh’s benevolent crime-lord, Tso Ngan Kwan. Yeoh is like Anthony Hopkins so far as they both class up any genre movie they star in. It’s fun watching her play the crime boss trying to go legit, sure. But the real treat is watching her kick some ass in one of the movie’s most furious melees. Never has one made whooping ass look so elegant.

Dave Bautista and Tony Jaa are solid additions to the cast who both have some memorable moments, but they’re bit players, and don’t receive much screen time, particularly Jaa. Hopefully we see more of Jaa’s character in a sequel.

Master Z: Ip Man Legacy is a rock-solid action flick. It has some of the year’s most ambitious fight sequences, but it’s held back from greatness due to its one-dimensional characters and uninspired plot. Even with those flaws, this movie is a lot of fun. The Master Z series shows potential, and with a bit of tweaking, it can be great. Even if these high-octane Ip Man spinoffs don’t improve in quality, I would still lineup to watch whatever comes next.