So, we arrive at an odd point in the career of Johnny Depp. The rock and roll years have caught up with him; the drugs have long since robbed him of his boyish good looks, now he has the straggly weather-beaten face of an ageing rock star. The memories of Depp mimicking Keith Richards and reinventing himself as a pirate have started to dim. It’s also been some years since he lit up a Tim Burton production. His split from Amber Heard was acrimonious and continues to make headlines for all the wrong reasons. Anyway, these days that sort of age gap is met with a raised eyebrow rather than beer. It says something about the adverse public opinion of Depp when the seemingly untouchable JK Rowling has to put out a statement defending his casting in Fantastic Beasts movies – the Harry Potter spin-off movies that no one really loves or understands. Suddenly for the first time in his career, Depp is not synonymous with “kewl” anymore.

For all his career and personal ups and downs, the one thing that no one has been able to call Depp is uncool, despite having a rock band that never took off or being there the night River Phoenix died. And to his credit, Depp seems to have realized that his public image needs a helping hand and has responded by trying to remind us that he’s a great actor, choosing movies that utilize his acting skills that also contain the ‘right’ social media friendly messaging.

At the Venice film festival last year, he appeared in Waiting for the Barbarians, the first English language film helmed by Ciro Guerra (Empire of the Serpent, Birds of Passage). Depp plays an evil imperialist, of the colonial rather than Star Wars kind, who arrives in this J.M. Coetzee adaptation to torture and browbeat the brown natives.

And now comes Minamata, which arrived at the Berlin Film Festival as a special screening. Depp not only stars in the film, as photographer W. Eugene Smith, but he is the producer and instigator of the picture. He even chose the director, New York-based artist Andrew Levitas, whose previous film, Lullaby, was an exploration of patients-rights and right-to-die issues in the United States, starring Garrett Hedlund, Jennifer Hudson and Amy Adams. There can be little doubt that this is Depp choosing a film and a story to showcase himself. But what’s more noteworthy is how he shares the stage to allow a more meaningful story to be told. 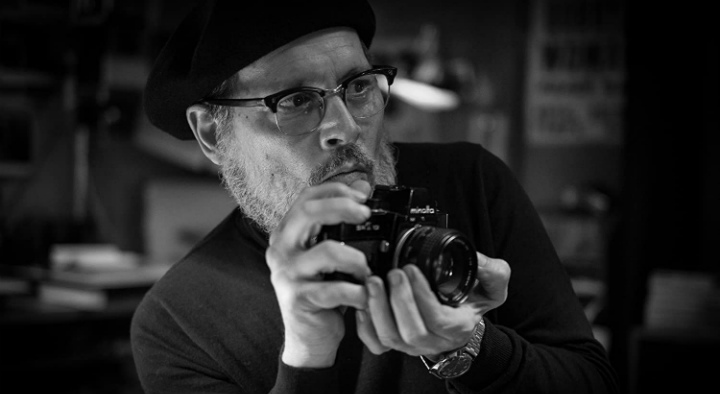 It’s easy to see why Smith would enamour someone who played Gonzo journalist Hunter S. Thompson. After all, Smith was a curmudgeonly but ultra-sensitive sort of Bohemian who took iconic photos for the magazine. The best known of which, Tomoko in Her Bath, was taken in December 1971 in the Japanese coastal city of Minamata for Life Magazine. It’s the picture of a parent tenderly bathing her Minamata Disease-stricken daughter. The movie tells the story behind the image, and it’s a tale all too relevant to our times, about corporate greed, environmental damage, and asking a big question pertinent to the Coronavirus age: What value to put on a life?

It’s a cousin of Todd Haynes’ recent and underseen Mark Ruffalo film Dark Water. Both films are about crusaders helping a concerned citizen uncover water pollution and poisoning that are done by corporations in the pursuit of profits who use their power to hide their failures. In both films, one man rides in to save the day. But that final narrative is both supported and undermined in Minamata, a film which suggests that the Minamata story should have another hero.

Minamata starts by showing Smith as a killjoy, which ensures Depp is in his element. But oddly Bill Nighy, who plays Life magazine editor Robert Hayes is not. The usually sure-footed British actor gives the sort of over the top performance as the stressed editor of a struggling magazine that’s usually reserved for actors playing J. Jonah Jameson of the Daily Bugle. Smith is the errant rogue freelancer with a formidable reputation, so good at his job that the magazine has to call on him, even if this means putting up with his alcoholism and short temper.

The way that Smith lands the commission by marching into an editorial meeting in full flow is pure Hollywood. There is even some astonishing overuse of exposition by a female reporter whose only job in the movie is to fill in information gaps for the audience. A problem with film financing is that to get a film made, is the false need of a western hook that will bring American audiences in, and here that is this tapped-on story about the end of Life Magazine as a weekly print outlet. Yes, it’s relevant to today, but it’s a side story that gets in the way of the more critical and better film that is made whenever Japanese characters are on the screen. If the American scenes are Hollywood, the Japanese ones are more like the work of Yasujirō Ozu, notable for their quiet, restrained confidence.

The most beguiling character in Minamata is Aileen Mioko, who is regally portrayed by Minami, an actress you might recognize from Battle Royale, appearing in her first English language role. Mioka is the story’s driving force, even though outwardly she appears serene. She coaxes Smith into her world by faking that she wants to use him for a commercial, where he chastises her for not knowing he only works in black-and-white. She knows alright and cajoles him into accepting a mission to highlight what is happening in Minamata.

When the film is in Japan, which it is for the majority of its run time, it works much better. It shows the mechanisms by which corrupt corporations operate, ignoring rules in the pursuit of profits. The relationship between Aileen and Smith develops but in a sedate, respectful way. She is a saviour of the town, but also him. It’s almost built into her nature to be a carer.

The cinematography by Benoît Delhomme (At Eternity’s Gate) is lush when filming landscape and neo-realist when at demonstrations, and he contrasts black-and-white and colour to constantly and calmly remind us that this is a true story. These are engrossing moments showcasing the dedication of Smith in getting his photo, but also how the local population also took up the fight for their rights. So, it’s a bit of a shame that the story sometimes loses sight of Mioko and returns to Depp interacting on the phone with the magazine in America.

But isn’t that just the way with life, Depp is the reason this story is getting told, and why interest is high, and yet because this leads to the need to tell the story through Depp’s eyes, it sometimes undermines the important and compelling story at the film’s heart. It might not be the film that will announce another resurrection of Depp, the actor, but it’s a step in the right direction.