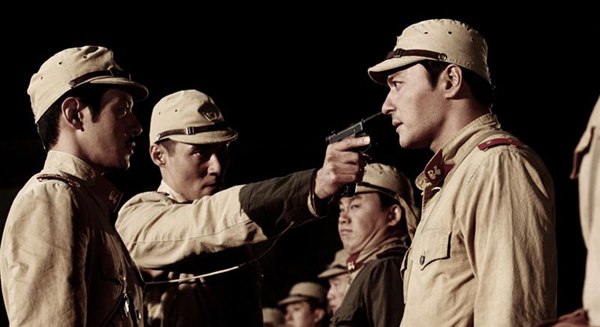 At a cost of $23 million U.S., the Korean wartime epic My Way marks the country’s most expensive production to date, and on a technical level at least it puts many similarly priced North American films to shame. This makes it pretty disappointing to say that while the film is allegedly based on true events, the actual story trots out every cliché in the inspirational, battlefield, and sports playbooks with hardly an original idea showcased throughout. Combine that with a two and a half hour running time and becomes somewhat tiring to sit through.

Director and co-writer Kang Je-Kyu tells the story of two born rivals – one Korean and one Japansese – and their personal and professional battles throughout World War II. Shortly after the start of the Japanese occupation, Korean marathon runner Jun-Shik Kim (Jang Dong-gun) is forced into service of the imperial army after his disqualification (for being Korean) starts a riot amongst his countrymen. His commanding officer just so happens to be the Japanese runner he lost to, Tatsuo (Joe Odagiri). Their disdain for one another often bring them to blows on and off the battlefield, but their bonds are strengthened after spending time in a Russian Prison Camp and after being taken prisoner and forced to fight for the Nazi’s in Germany during the Normandy invasion.

That’s the short version of it that doesn’t mention sub-plots about the friend of Kim who goes power hungry when he allies himself with the Russians or the one about the female Chinese assassin who seems to only be there to give the film a single female role. It might be more exciting if this wasn’t one of the kind of film that gives the ending very clearly away in the first five seconds of the movie. It can be spiced up in a number of different ways, but any suspense gets killed in the opening frames.

The plotting at times seems oddly reminiscent of War Horse, but with human beings. It’s very much an over the top melodrama that bounces from tragic situation to tragic situation simply as a means to get the characters from point A to point B. There’s a lengthy set-up that won’t come in to play until the end. There are the horrors of fighting a war that the main character doesn’t want to fight, followed by an escape, followed by capture, followed by another war, and so on and so on and dragged out to 145 minutes. After the second battle sequence and about the tenth disagreement that’s settled with a fistfight or beating, it becomes very tedious.

The battle sequences look impressive, and Je-Kyu doesn’t shy away from the gorier aspects of war, but even then you really only need to see one person run over by a tank to get what he’s trying to convey instead of five or six. The film’s excess isn’t contained to the battlefield, but to the embarrassingly hackneyed script that practically dictates that swelling musical cues be played as loudly as possible over every sequence, even if it’s blatantly ripping off another film. Here you can see the inspirational marathon from Chariots of Fire, the tracking shot of a bomb dropping from Pearl Harbor, the North by Northwest showdown with a plane, the slow motion cry from Platoon, the honourable fight to the death from dozens of other films, and about a dozen more I’ve probably forgotten about or didn’t recognize.

Almost cheesy in its predictability and over the top nature, My Way isn’t so much a failure, but it’s definitely a piece of feel good product that doesn’t really care about giving the audience anything new. The lead performers do what they can, and Je-Kyu shows some skills even when blatantly ripping off other filmmakers, but all this weary film will likely do is make viewers feel an overwhelming sense of déjà vu.