Ratchet and Clank is the latest video game franchise to receive the big screen treatment, arriving in the form of a relatively harmless animated movie targeted at children. That fact alone is likely going to save it from the scorn that normally awaits other video game adaptations. The Ratchet and Clank film doesn’t have any particular reason to exist, but it is competently put together and diverting enough to keep the kids entertained for 90 minutes.

It’s also one of the more successful video game adaptations almost by default, at least in the sense that Ratchet and Clank faithfully captures the tone of its progenitor. The game’s whimsical and slightly anarchic sense of humor works just as well in an animated film, allowing the movie to coast along without stopping to reconcile reality with the comedic sensibilities of a cartoon.

So how does Ratchet and Clank measure up as a film? It’s all right. The plot kicks off with Ratchet (James Arnold Taylor), an immediately likeable Lombax with the perfect blend of adorable mascot fuzziness and roguish Han Solo charm. Ratchet works at a garage fixing spaceships, but he dreams of being a Galactic Ranger like his idol Captain Qwark (Jim Ward) and leaps at the opportunity to enlist when the Rangers start searching for recruits. Ratchet eventually teams up with Clank (David Kaye), a helpful robot that was designed for combat but came off the assembly line small and charming instead of large and murderous. Together, they set out to battle Chairman Drek (Paul Giamatti) and Doctor Nefarious (Armin Shimerman), two supervillains who have been busily destroying uninhabited planets and may soon be upgrading to inhabited ones.

That’s pretty much it. Ratchet is an endearing protagonist who greets the world with big eyes and relatable earnestness and it’s enjoyable to follow his sense of wonder when his dreams start to come true. Qwark is an amusing dunderhead stumbling around like a (much) dumber and more self-absorbed version of Buzz Lightyear, while the rest of the colorful cast shoots first and never really bothers with the questions. The first half of the movie zips by with some legitimately funny moments and a few excellent Easter Eggs for video game insiders.

Unfortunately, the second half drags its feet through a series of generic set pieces as it slides towards a by-the-numbers conclusion, beginning with a weird rant that seems to suggest that anyone raising issues of depression or mental illness in the media is a manipulative public relations expert doing it solely for money and attention (it’s part of Drek’s evil plan). The exchange leaves a slightly sour aftertaste that lingers, resulting in a finished product that ends up somewhere between watchable and disposable. Ratchet and Clank is ambivalent, another easily digestible action-comedy without much in the way of substance. 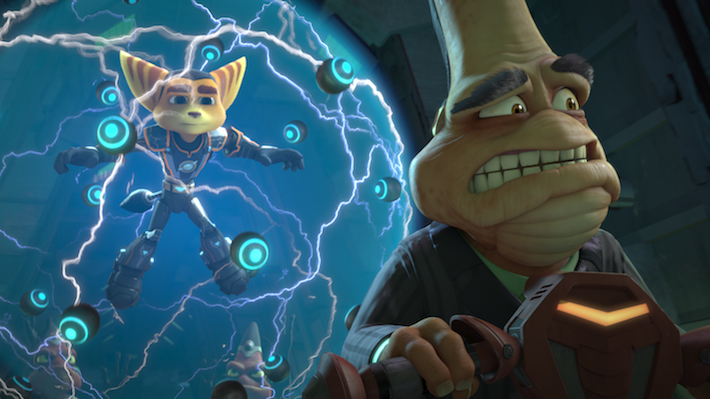 That mediocrity makes Ratchet and Clank a strange entry in the video game movie canon. It’s the rare adaptation that works as a standalone film yet unmistakably owes its inspiration to another medium. Ratchet and Clank plays out like a series of video game cut scenes strung together with the interactive bits ripped out. Every establishing shot looks like it’s establishing the setting for the next set of platforms. The movie doesn’t let the viewer participate in the boss fights, but you can sort of see what they’d look like in the interactive version of the film.

All of which is to say that Ratchet and Clank is the platonic ideal of a video game movie narrative. It provides loose but plausible justifications to move the action from a starting garage to a big city to a remote planet to a space station, always giving the designers an excuse to create another set of levels. Ratchet and Clank benefits from the fact that it looks like a video game. It makes the silliness more plausible, proving that there’s no excuse for the spate of bad video game adaptations we’ve been subjected to over the years. You can make a decent flick with a decent script that sticks to the aesthetic tone of the game it’s adapting.

That’s what’s so odd about Ratchet and Clank. It’s not a great film, nor is it the best video game adaptation. However, Ratchet and Clank might provide the best template for other video game franchises looking to make the leap. The movie recognizes that something usually gets lost in translation when films try to mimic the visual language of video games, which is why tone is ultimately more important than fidelity. Resident Evil may be more fun, but Ratchet and Clank demonstrates that video games can work, delivering fare that’s just as forgettable as Hollywood adaptations from any other medium.