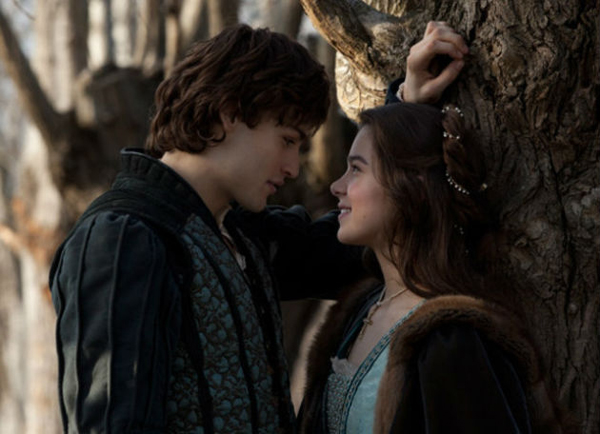 There’s almost nothing that I can say about Carlo Carlei’s big screen staging of Romeo and Juliet. It would be redundant to say there’s nothing here that you haven’t already seen before, and yet it’s worse than that. This is EXACTLY what you have seen before. It’s a drab, lifeless Shakespearean melodrama perked up ever so slightly by a few decent performances that does absolutely nothing whatsoever to warrant its existence.

You know the story. I won’t rehash it in great detail because I would hate myself for even suggesting you wouldn’t already know it. Young Romeo (Douglas Booth) from the house of Montague falls madly in love with young Juliet (True Grit stand-out Hailee Steinfeld) at first sight. Their families are at war, they simply would never let them be, they have a stupid idea, everything ends on a downer note. (Whoops, should have put a spoiler warning on that).

I had a conversation with a friend who was an actor the other day about something totally unrelated to this, and he said something that stuck with me. He said that watching something unfold exactly as it’s written on the page is one of the most boring things you could ever see. Carlei’s Romeo and Juliet should be held to that exact rule. There isn’t a single novel or original beat to this version of what’s quite possibly the most famous play every written for the stage. Sure, it’s all been cut down considerably to the bare bones and iconic beats of the story, and for once it has somewhat admirably age appropriate leading actors, but that’s it. This is a retelling of Shakespeare that’s so dedicated to getting the text delivered in the blandest possible ways, that it makes little difference that the film around it feels so lifeless.

If you have ever watch a high school or university production of Romeo and Juliet that was not expressly made for a paying audience, but rather to simply teach how the text should be read, you have seen all that Carlei’s vision has to offer. It’s so “back to basics” that it’s frankly insulting to believe that anyone with a deep love a Shakespeare could ever get behind this. By this point in Shakespeare’s legacy it’s been established quite flippantly that he has told every story there is to tell. That’s what frees people to actually have fun with the material, the structure, the acting, the setting, the tone, the pace, and every other aspect that isn’t the dialogue or the story itself. Those are the adaptations that people remember. Heck, those are the films and plays people remember even when they don’t expressly call themselves Romeo and Juliet. Everything about this production reeks of the blandest form of competency possible.

Booth and Steinfeld are helpless, neither actor really old or wise enough to stand up and realize they are good enough to be given some leeway with the material. Damien Lewis shows up to add some gravitas as Lord Capulet, ditto Stellan Skarsgard as the peace keeping Prince of Verona. Paul Giamatti adds some much needed heart late in the slog as the apothecary and monk who helps the lovers hatch their fateful plan. Kodi Smit-McPhee, oddly enough and a young actor himself, actually asserts himself quite nicely in the usually thankless role of Benvolio, but that’s probably because in possibly the greatest sin of all Mercutio (Christian Cooke) and Tybalt (Ed Westwick) are the weakest big screen incarnations of two of the most blustery and fiery characters in all of literature.

There’s nothing that can be gleaned from Carli’s film that couldn’t be crafted from getting a bunch of friends together and reading the play aloud. That’s something that Joss Whedon was able to do with his adaptation of Much Ado About Nothing, which is still flawed, but blows the doors off this dross. There, Whedon took a majority of those classical, stilted line readings and played with the setting and tone. I’m sure no one needs to be reminded about Baz Luhrmann’s love-it-or-hate-it take on these same star-cross’d lovers. Say what you will about those, or even anything a theatre goer might see at Stratford. All of those productions have the sense to at least change something about their production to make things feel newer, more interesting, or at the very least vital. Carli’s film might be the least vital, necessary, or interesting Shakespearian adaptation ever created. I’ve had high school English classes at 7:30 in the morning with the same material more dramatically charged than this.