Rust and Bone Review - That Shelf Skip to main content 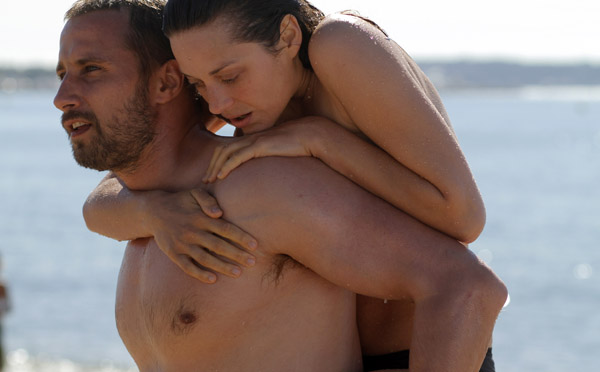 There are moments and certainly performances within Rust and Bone that flat out demand attention and praise. Yet somehow, those little pieces never add up to anything resembling a satisfying whole. Writer/director Jacques Audiard is clearly a major talent coming off of the masterful A Prophet, Marion Cotillard already has an Oscar, and Matthias Schoenaerts delivered an incredibly nasty and heartfelt performance in Bullhead and is back in similar territory here. With three major talents at the center of a production, they should just theoretically show up and there will be an interesting movie. And yet no matter how many scenes or moments within Rust and Bone feel genuinely engaging, the movie as whole reeks of uneasy melodrama failing to move or satisfy like it should. It’s proof that even major talents can deliver mediocrity if they aren’t paying attention and it’s a shame that this collaboration went to waste on something so deeply dull.

Schoenaerts stars as a battered failure, opening the film traveling by train to live with his cashier sister with his five year old son by his side whose mother used him as a drug mule. When he gets to town, he finds a job as a bouncer and dabbles in illegal bareknuckle boxing on the side. He has a heart beyond the thuggishness, though. Cotillard is a beautiful Orca trainer who Schoenaert’s falls in for with when he sees her at a club. Then one day she has a terrible accident at a Seaworld show (which I swear to God plays out to a Katy Perry song that will later be used again to convey a false inspirational message) and loses both of her legs. She’s a depressed wreck, but she calls Schoenaerts for support out of desperation and he’s not only willing to sympathize but he’s also the only person willing to sleep with her. Eventually they become lovers,which is crazy because she has no legs and how could he possibly love an intelligent, beautiful, independent woman with no legs?! She even becomes his underground fight manager thanks to a leather coat and starts to care for her son. Looks like two broken souls just might be saved through love…and did I mention that one of them doesn’t have legs? What bravery!

What we have here is a story just cheesy enough to be funded by Hallmark if it weren’t for all the unexpected bursts violence and subtitles. Those two art house friendly commodities are enough to make people take the project seriously despite the sentimental twaddle. Well, perhaps that’s unfair. It’s incredibly well made sentimental twaddle. Jacques Audiard is a French filmmaker after all and by association he does know how to shoot a movie in a beautifully abstract style. Rust and Bone is gorgeous to look at and whenever an opportunity for a set piece arrives (like the whale-related mishap or the bouts of blood-soaked fisticuffs), the man delivers some gorgeously red-tinged visual storytelling.

Schoenaerts has the physicality to play a brute and the skill to present a soft soul beneath the macho posturing, even in the midst of boneheaded violence. Cotillard is one of those famous actresses who are better than folks give her credit for, and she mines the depths of her character’s tragedy without ever feeling less than believable. She commands the screen knowing it’s the most complex role she’s gotten since La Vie En Rose, and combines with some fantastic digital wizardry to create a fully believable amputee. So the actors deliver their A game and the filmmaker directs with style, it’s just a shame none of that would have helped the film as much as a better script.

Rust and Bone isn’t a film that’s possible to completely hate. There’s too much talent involved and inevitably that leads to some deeply moving scenes. However, unless you’re a lover of ripe melodrama, it’s also a movie that’s impossible to love. The art house class and weepy instincts never merge, making the movie a creaky vessel that slides from quality to crap and back again, often within the same scene. It’s certainly worth recommending to anyone who adores Cotillard, because in context she’s excellent and all of her inevitable awards nominations will be deserved (and if she’s to be rewarded Schoenaerts deserves attention as well). You just can’t help but wonder how none of three collaborators ever noticed that their movie was going so wrong so often. Hopefully they’ll all meet together on another project because the fact that Rust and Bone ended up being remotely watchable is a miracle and with a decent script they could make something quite special. Some people might try to convince you that this is that movie, but unless you’d like to waste two long hours of your life, please don’t believe them.