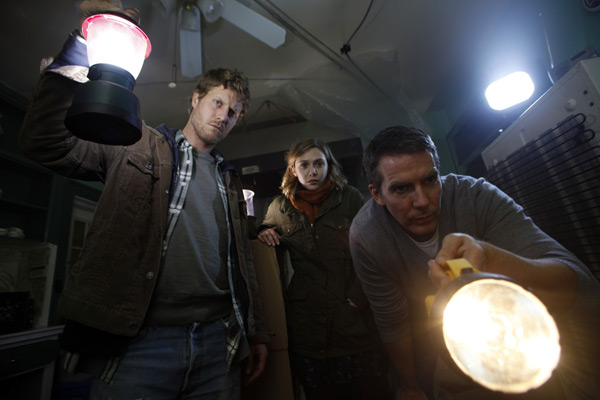 You gotta give Alfred Hitchcock credit for pioneering techniques that are still presented by filmmakers today as being new, groundbreaking achievements. After all, the guy shot Dial M For Murder in 3D in the 50s; long before the post-Avatar claim that glasses-bound movies are the future in cinema. He famously shot his 1948 thriller Rope to appear like it was executed in a single take, which acts as the binding gimmick that defines the new haunted house flick Silent House. Husband and wife directing team Chris Kentis and Laura Lau (who previously made the shark thriller Open Water) have dusted off one of the master of suspense’s oldest tricks for their latest movie and while it certainly stands as an impressive technical achievement, unfortunately it isn’t much of a movie.

The undeniably talented Elizabeth Olsen stars as a troubled young woman (which is becoming something of a trademark for her) who goes out to the boonies with her father (Adam Trese) and uncle (Eric Sheffer) to bid farewell to the family’s old vacation home. They’re cleaning out some old memories from the derelict house when the power goes out and Olsen starts hearing mysterious noises. She sends her father to investigate and he doesn’t come back, but fortunately Olsen has some new friends to play with: a creepy little girl and old man who stalks her in the shadows. For the next 70 minutes or so Olsen stumbles around the house in real time shrieking at things that go bump in the dark and working herself up into a tizzy.

Silent House is a pretty straight-forward haunted house movie with only the real time single take shooting style to distinguish it from the pack. Admittedly, it’s a decent gimmick for movie geeks, and it’s at least an impressive technical achievement. Obviously the film isn’t actually done in one take, but there are undoubtedly well hidden cuts along the way to help make the experiment technically feasible. There’s a certain amount of fun to be had in marveling and how Kentis and Lau pulled off their nifty little parlor trick, there were obviously people hidden throughout the set to splash blood and appropriate moments. Still, you can’t help but be wowed by the complex choreography pulled off by the cast and crew. It’s just a shame that all that hard work and cinematic slight of hand was wasted on such a crappy screenplay.

Without giving too much away, this is one of those haunted house stories that features a third act twist that turns the ghosts into psychological manifestations of the protagonist. It’s a tired trick that rarely works simply because the spooky shenanigans of the first half rarely make sense when reconsidered through the psychological twist. That’s a problem that’s even worse in Silent House because the audience sees that first chunk play out in real time and huge passages don’t make any sense once you’ve realized what was actually supposed to have happened. It’s a problem that Kentis and Lau kept the from original Uruguayan film La Casa Muda, and it’s a shame that Kentis and Lau never fixed the issue when they got their own crack at the story.

Aside from the technical daring-dos, the other bright spot is Elizabeth Olsen. She’s onscreen the entire time, playing out long sequences and emotional journeys in single takes and delivers the goods. She’s not as good here as in Martha Marcy May Marlene, but it’s a less demanding a role and she’s at least good enough to prove her performance in that wasn’t a fluke.

A soft recommendation is in order for those hopelessly in love with Elizabeth Olson or desperate to see if they can spot how the one-take tricks were done, but even if you fall into either of those categories you wouldn’t miss much by giving this movie a pass. This is one of those movies destined to fill DVD clearance bins and copies should be dropped into those boxes on mass very soon following a blink-and-you’ll-miss-it theatrical run.