American Ultra could have easily fallen into the category of farcical tripe, but this stoner spy spoof is saved by good performances and surprising style.

To celebrate the release of American Ultra we're giving out passes to advanced screenings across Canada AND some super rad prize packs!

We talk to Night Moves director Kelly Reichardt about the genre aspects of her films, the temperament and contradictions of her characters, and why her films always feel rooted in specific moments. 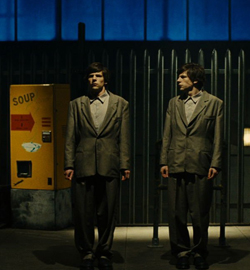 Enter for a chance to see an advance screening of The Double in Toronto on Wednesday, June 11th at 7:15pm, courtesy of Dork Shelf and D Films!

Now that the teens and adults have had their run of the TIFF Bell Lightbox, we take a look at some of this year's best bets and special events happening at the 2014 TIFF Kids International Film Festival, which kicks off today.
Night Moves Special Presentation Director: Kelly Reichardt Each film Reichhardt makes is stark but mysterious, amplifying nuanced emotions by keeping their heads to the ground of the human experience. Night Moves (which has nothing to do with Bob Seger no matter how much you hum the song to yourself) is Reichardt taking another half-inch towards […]
The Double Special Presentation Director: Richard Ayoade After starting his directorial career with a pitch perfect recreation of bad 80s television in Garth Marenghi’s Darkplace, Richard Ayoade has slid into to feature filmmaking by mimicking much artier affair. His sweet little debut Submarine riffed on Wes Anderson and all the French New Wave directors that […]