TIFF 2013: The Double Review - That Shelf Skip to main content 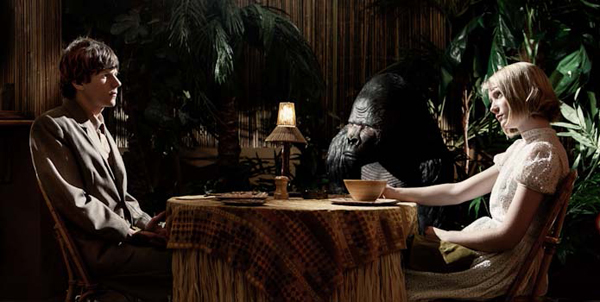 After starting his directorial career with a pitch perfect recreation of bad 80s television in Garth Marenghi’s Darkplace, Richard Ayoade has slid into to feature filmmaking by mimicking much artier affair. His sweet little debut Submarine riffed on Wes Anderson and all the French New Wave directors that spawned him and now The Double sees Ayoade doing a spin on Orson Welles’ The Trial and other lightly sci-fi metaphysical comedies. It would be an irritating way to kick start a career were he not so good at it and as long as the per project references remain so diverse, it’s not a bad template for a body of work. Ayoade is carving out a place for himself somewhere between Britcoms and the art house and it’s a pretty unique place to be.

His latest film stars Jesse Eisenberg as a sad sack office drone with no confidence and a crush on his neighbor (Mia Wasikowska). One day an exact double of him shows up on the subway, except he’s successful in all the ways the loser Jesse is not. Cue a lot of confusion, angst, existential crises, and a little personality swap humor. Sounds wacky in theory and is quite funny, but with the script based on a Dostoevsky novella and co-writing duties assigned to Harmony Korine’s brother Avi, the flick can’t exactly be described as slapstick. Visually and thematically ambitious, it feels like Ayoade desperately wants to be taken seriously as a filmmaker, yet just can’t keep himself from filling in any arty silences with jokes. Thankfully, the combination works better than straight up pretension and the film represents another step forward for Ayoade who is quickly defining himself as one of the UK’s finest directors, comedy or otherwise. (Phil Brown)