The semi-annual independent gaming marketplace returns to Toronto on Saturday.

This week at the Bloor, a look at an inspirational pianist that picked up an Academy Award this year and a not so inspiration, but comprehensive and artistically enlightened look at the history of teenagers.

The Toronto Comic Arts Festival's co-founder talks about once again taking over the Toronto Reference Library this weekend, and its collaborative work with video games, Comics vs. Games, now entering its third year - and the third dimension.

Archive, Memoria Technica is one of the dozens of video games appearing at this weekend's Bit Bazaar Winter Market.

Sam Maggs shares her haul – and, of course, the wicked work of some incredibly talented folks – in her fave TCAF finds of 2013!

Free Comic Book Day unites lit and art lovers, creative types, and penny-pinchers looking for some free swag. Our own Mike Pignataro travelled to Paradise Comics on FCBD to see what all the fuss was about.

Eric Weiss reflects on a seriously dorky weekend in Toronto, one that amazingly didn't include watching The Avengers. 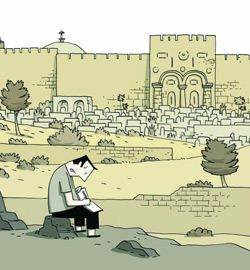 With Wizard World Toronto Comic Con out of the way and four long months until Toronto's FanExpo, all roads lead to TCAF (The Toronto Comic Arts Festival). One of the major releases at this year’s festival is iconic artist Guy Delisle's newest work, Jerusalem: Chronicles from the Holy City. Unfamiliar with Delisle? Let me fill you in.

Snaps's inspiration was a box of old photos that author and artist Rebecca Kraatz found at a flea market, apparently taken during the 1940s. "I studied the unknown people in the pictures," she explains in her introduction, "often with a magnifying glass, trying to decipher their relationships with one another."