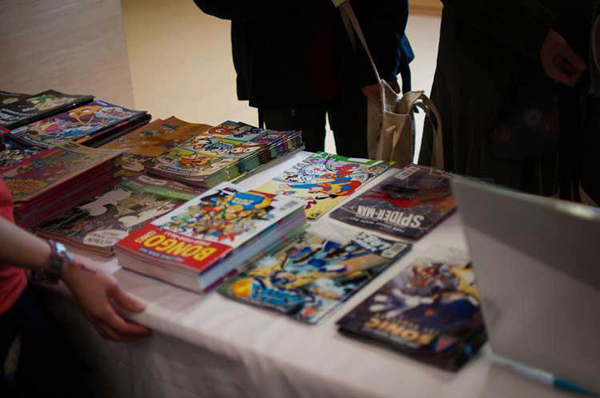 Media used to be discrete. Movies were movies. Games were games. And the Toronto Comic Arts Festival was a weekend devoted entirely to comic books.

That changed in 2012 with the inaugural Comics vs. Games, a showcase for commissioned projects that blend the two media. The tradition continues this weekend with Comics vs. Games 3 at the Bit Bazaar Spring Fair at Bento Miso.

“When we started, there wasn’t that level of integration between comics and gaming,” said TCAF co-founder and festival director Chris Butcher, looking back on the rapid growth of the festival’s gaming profile. “It’s taken me by surprise.”

So why did a convention dedicated to comic books – and experimental comics at that – evolve to incorporate video games? As the manager of The Beguiling book store in Toronto, Butcher comes from the world of comics, but he knows a good idea when he hears one.

“At TCAF everything comes together because there are interested and passionate people,” said Butcher. That included Spooky Squid designer Miguel Sternberg, who was searching for an outlet while organizing the original Comics vs. Games showcase with TIFF Nexus. “Miguel came to me with a great idea looking at different kinds of narrative and how comics had influenced different media.”

The effort brought the first Comics vs. Games to TCAF, which in turn led to similar events, including the creation of last year’s Bit Bazaar. The invasion may have been inevitable. TCAF was established as an outlet for independent comic creators working outside the superhero mainstream. The convention seeks to highlight comics that push the artistic boundaries of the medium.

In 2014, that mandate necessarily demanded the inclusion of digital media. Comic book artists are familiar with video games, many of which have distinct artistic styles that have migrated into print. The cross-pollination between comics and video games runs so deep that it would be meaningless to discuss one without reference to the other.

“People are non-discriminatory with their tastes,” said Butcher, citing a younger generation accustomed to sharing platforms like Tumblr. “They like cool stuff regardless of what medium it is.”

With that in mind, who gets to dictate what counts as a comic book in an era of iPads and digital distribution? TCAF will always have paperbound roots – even online comic artists are expected to display physical merchandise at TCAF – but the inclusion of video games only enhances the artistic scope of the festival.

“What do games have to say about comics? And what can people who create games and comics say to a wider audience?” said Butcher.

For Comics vs. Games 3D, artists will use the Oculus Rift to answer those questions. The virtual reality headset provides a unique opportunity for artists accustomed to a more traditional two-dimensional canvas.

“The artists had a good time figuring out what 3D meant to them. I don’t want to give away any secrets, but there’s some great stuff going on,” said Butcher, adding that Bento Miso already had the necessary Rift development kits.

The full lineup for Comics vs. Games 3D includes Libraria, an adventure game set in a pop-up book from Kyle Dwyer and Adam Hines, and Altar, an exploration of alien tableaus from Daniele Hopkins and Gillian Blekkenhorst. There’s also an “immersive magical girl transformation battle” from Christine Love and Jenn Woodall.

Meanwhile, a gallery of red-and-blue 3D artwork will remind audiences that comic publishers were experimenting with 3D long before polarized lenses came into vogue.

“Good old-fashioned red/blue 3D is a lot of fun and a great aesthetic,” said Butcher. “I would have hated it if we called it Comics vs. Games 3D and didn’t have any of those red and blue glasses.”

TCAF will be providing additional video game content for those unable to make the trip to Bento Miso. A mini-arcade at the Toronto Reference Library will feature a catalogue of greatest hits from past iterations of Comics vs. Games, including The Yawhg, the recent IGF nominee from Damian Sommer and Emily Carroll.

Those who opt to commute between venues will have the opportunity to sample more of the city and get a glimpse at the geography that fuels Toronto’s current creative output.

“Toronto is a hub for artists, but we’re all doing our own thing,” said Butcher. “There’s so much going on that people form their own little hives and then slowly come together and make a mega-hive.”

Wonderful collaborations emerge whenever events like TCAF draw game developers and comic artists into close proximity. The process continues with Comics vs. Games 3D, so be sure to head to Bento Miso to see how crossover sensibilities are rewriting the rules of modern media.

Admission is free for both events.