Warning: The following review may contain an excess of blob-related puns, descriptors and portmanteaus.

What’s not to like about blobs? This guy may have a few issues with them, but for the most part video games and globular protagonists have gone together like… well, two blobs do. Toronto-based indie developers DrinkBox Studios have been hard at work on Tales from Space: About a Blob for several years now, putting their own spin on blob-based gaming. We have been intrigued by the game ever since its appearance at Gamercamp in 2009, but had not heard much about it until last September, when it was announced that the title had become part of Sony’s Pub Fund program. Now About a Blob is finally available for download on the Playstation Network, but does this platformer-puzzler live up to the gooey pedigree of its blobby forefathers?

With an eclectic mix of physics-based platforming, object absorbing, puzzle solving, and a wonderful 1950s B-movie aesthetic, About a Blob has a lot going for it. An incredibly engaging co-op mode is just the icing on the cake. You will begin your adventure as a tiny glop of interstellar goop hurtling towards the Earth with dozens of your blob-thren. Captured upon landing by a mad scientist and taken to his nefarious lab, you (and perhaps a second player) immediately escape your captor and begin enveloping anything and everything that you can absorb. Once you have escaped the lab, you and your gelatinous companions will have to brave farms, power plants, suburbs and the dreaded city.

As your blob grows in size, so to do his foes; from tiny missile-firing robots all the way up to full-sized tanks, helicopters and beyond. It is a gameplay mechanic that has already garnered the game a few comparisons with the Katamari series, as sort of side-scrolling version of the unique roll-up-the-world genre. But to say that About a Blob is simply that does it a disservice. The absorption mechanic does not only function as a means of growing the titular protozoa, it’s also a nifty offensive tactic: Anything that your intrepid blob can swallow (that is, anything smaller than him) can be spit back out as a means of defending himself or solving a problem. Paint cans, cows, cars and even people literally become cannon fodder for the blob.

As for the platforming elements… Do you remember those days of yore spent playing Sonic the Hedgehog or Super Mario Bros. 3? Gripping the controller until it was covered with sweat, tensing your legs up as your feet came up off the ground and pursing your lips as you determinedly leapt from point a to point b? Yes, the preceding statement did sound vaguely sexual, but that was a description of our collective video gaming youth. And it was precisely the feeling we had while playing About a Blob. There is some seriously tricky platforming to be had here, a demonstration of the designers’ clearly deep understanding and appreciation of the genre. 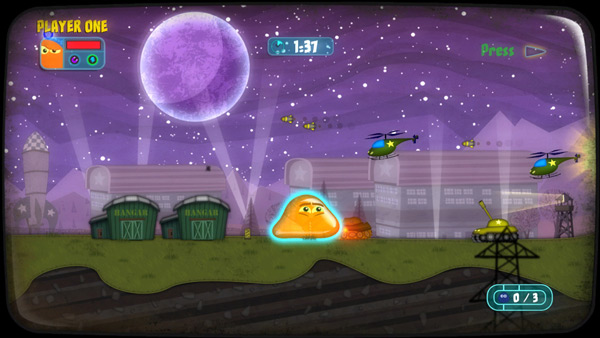 If we have any gripes with the game, it’s that the physics of the blob sometimes make the platforming more difficult than it should be. Nothing is more disheartening than successfully making a series jumps through a tunnel of deadly lasers, only to die when a flagellum of blob droops over the edge of the platform and into said deadly lasers. Such is the nature of our nearly-liquid hero though; his elasticity will help more than hinder you for the majority of the game. There are no lives to be had here, a squashy death incurs no penalty other than being docked seconds from the ever-present timer – you are however encouraged to try to beat the clock for trophies. The only other complaint we can level against About a Blob is the music. While the background tunes are certainly great, we wish they were longer and more varied, so to avoid the repetition that inevitably comes from long playthroughs.

It’s very easy to recommend Tales from Space: About a Blob. The designers at Drinkbox clearly put a great deal of attention and care into the game’s development, and it shines through. Whatever its shortcomings — and they are few — the good far outweighs the bad. Blob has hours of potential pick-up-and-play fun to be had on your own or with friends. If you enjoy the challenge of classic platformers or the satisfying-if-OCD-inducing gameplay of the Katamari series, you will definitely get something out of About a Blob.

Released to Playstation Plus subscribers on February 1st, Tales from Space: About a Blob is now widely available for download on the Playstation Network.