At long, looong last, Netflix has finally unveiled their Marvel Universe climax team-up series, The Defenders. Bringing together the titular heroes of Daredevil, Jessica Jones, Luke Cage, and Iron Fist, Defenders is basically The Avengers on a TV budget but with way more cursing and sex. And based off the first four episodes, it’s pretty much a blast.

The Defenders immediately opens with a brisk, well-staged fight scene in a claustrophobic sewer, immediately signalling how this series intends to move. Despite strong showings for Daredevil and Jessica Jones, Marvel’s Netflix series seemed to hit a bit of a slump with the turgid back half of Luke Cage and both halves of Iron Fist. Fortunately the season of Defenders clocks in at a trim 8 episodes (as opposed to the usual 13) so showrunners Doug Petrie and Marco Ramirez are free to eject the usual padded subplots (the twins in Jessica Jones? Ugh) in favour of nimbly juggling their four leads. In spite of a few minor pacing issues, they mostly pull it off – especially when the heroes start to cross paths, and fists, towards the end of episode 2.

Seriously, watching Danny Rand futilely karate-punching the invulnerable Luke Cage, only to get off a chi-powered haymaker, is worth the price of admission alone.

We first catch up with our four heroes scattered all over the globe. Danny Rand (Finn Jones) and Colleen Wing (Jessica Henwick) are hot on the trail of the evil ninja cult The Hand. Matt Murdock (Charlie Cox) has hung up his Daredevil horns in favour of pro bono legal work, desperate to ignore his crime fighting impulses and forget his deceased love (or is she?)(naw, she’s alive) Elektra (Elodie Yung). Luke Cage (Mike Colter) has finally been released from prison, and he’s determined to help the people of Harlem and finally make time with his estranged bae, Claire (Rosario Dawson, once again bringing the chops). Rounding out the heroes is the series MVP by far, Jessica Jones (Krysten Ritter), still drinking hard and only reluctantly taking cases. 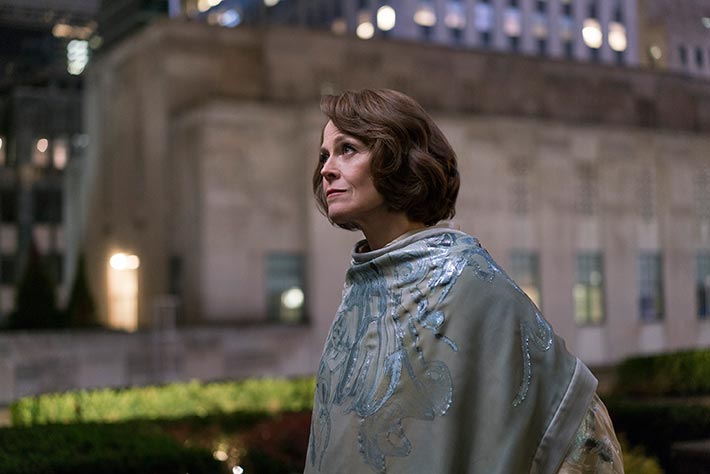 The villain of the piece is a mysterious woman named Alexandra (Sigourney Weaver), here commanding the screen every time she appears. Weaver’s Alexandra is ruthless, cold, and manages to act circles around many of her costars. The stunned look on Danny Rand’s face when she plainly states “Do I look like I’m hiding” is priceless.

One of Defenders’ toughest challenges is corralling the widely varying tones of its feeder series; a challenge the series mostly seems to overcome. The gumshoe PI-ing of Jones and the courtroom crusading of Daredevil fare particularly well – Murdock in particular has much of his self-flagellating impulses curbed, allowing Cox to rediscover what made Matt such a winning character early on. Still, even by episode 4 the audience is left itching for him to get back into the suit…

Back to Jessica Jones, she shines as the cynical wisecracking Han Solo of the eventual superhero group. Ritter is hands down the most fun character to watch, as she challenges each of her team mates and prevents the proceedings from ever drowning in self-seriousness.

Luke Cage seems to have evolved, now holding no reservations about getting involved in the community – a welcome change from the unmotivated stasis he spent too much of his own 13 episode series in. As much as I like Colter, I still remain unconvinced on this current version of the character. In Jessica Jones, Cage was a scene-stealing supporting player, with charm and heart to spare. Yet I found that in his series he quickly became a stiff leading man, losing much of his charisma in the process. Cage still seems to retain with a bit of that staleness in The Defenders, though he comes to life as the heroes begin to pinball off of each other.

As for Iron Fist, he’s… better, kinda? The recent Iron Fist series was much derided for portraying Danny as bland, naive, and whiny, whereas in Defenders… he’s still all of those things. The good news is, he’s much less front and centre, generally being played off of the other heroes who show very little patience for his immaturity. Danny gets owned a lot, and even eventually makes a case for why his stubborn earnestness serves to unite the team.

Overall, the first four episodes of the series is like throwing a party for old pals (some better pals than others), and watching with delight as they mingle. The dialogue crackles, even when the narrative slows down perhaps a little too long to catch its breath. The actions sequences are decidedly more Daredevil than Iron Fist, smoothly shot, capably executed, and thrilling (yes, there is a cool fight in a hallway). The series retains the moody, neon-lit atmosphere of the previous series, and the title sequence is a rousing theme suitable for a group of solitary heroes coming together to save a city.

With a strong start and well-honed cast, The Defenders manages to make good on the wide-eyed Marvel Netflix plan of three years ago. The only remaining question is whether the climactic series will be satisfied with with a well-executed team up, or whether it has any remaining surprises up its sleeve. Even if those surprises are just Jessica Jones relentlessly dropping massive burns on her do-gooder superpals.