“Gone As A Girl Can Get” is a brand new world — literally. The Iron Witch’s wish to whisk Wynonna away has created a new world where the Earp heir is erased. However, her memory flickers in the mind of many, but can they break the spell to bring her back?

The opening sequence features Waverly, Haught, and Jeremy surrounded by murderous Revenants running against the clock to get Wynonna back from wherever she came. The barn they are holed up in gets blown to smithereens, with a seamless A plus bleed into the opening title sequence.

Speaking of ‘splosions, Doc “ Dynamite” finds himself back at the bottom of that cursed well, but instead of decades of solitary confinement, he’s rescued by Revenant poker buddy Stevie. ‘Cept the rules have changed since the Iron Witch made her wish upon the magical hockey trophy: Wynonna Earp never existed or is somehow erased, Doc is a criminal working with the demon folk, and Dolls is his mortal enemy.

Doc is immune to amnesia/parallel reality of the non-Wynonna world, and quickly tries to convince his former friends that something is askew. He let’s Rosita free of her literal chains (apparently she was cooking “product” for him under some slave conditions) and she doesn’t take the bait, so he’ll have to come up with some more persuasive strategies and OF COURSE he goes for dynamite.

Jeremy (who carries a gun in this universe!) and Dolls are in the process of interrogating the Mercedes’ faced widow who laughs gleefully that they are FUCKED. Doc tries to reason with Dolls, but the two have too much bad blood in this world and Doc gets put in the glass prison with the (now venom-less) phantom. 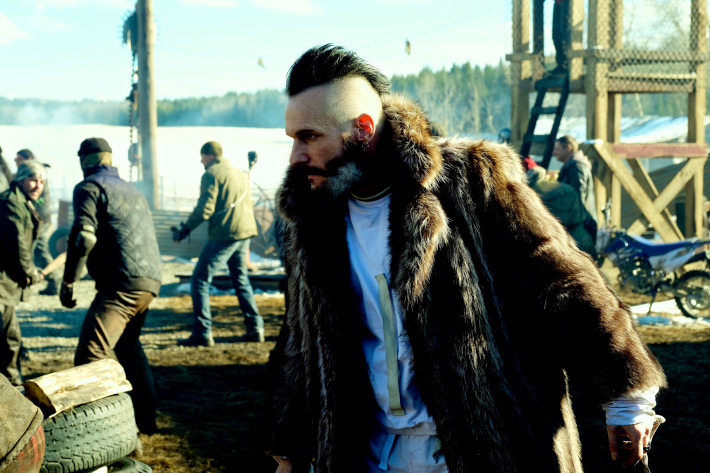 Haught’s still at the precinct, although in this world they are down on Sheriff Nedley. Between trying to explain to her useless coworker how a missing dog report works, Nicole waits for Waverly (Gibson) to bring her lunch. The slow-mo entrance with enchanting music and all lets us know the heat between the two is still there, however, RECORD STRATCH, this Waverly is engaged to Perry and is gearing up to leave Purgatory forever.

Although there are more ghosts in her closet, or rather demons in padded rooms, Waverly needs to deal with before she can do such a thing. Perry had hired a private investigator to find out what happened to her Earp kin, and one Bobo Del Ray had staggered into town and is asking for her. Waverly is infuriated her partner would go behind her back to find something out before her — anger she doesn’t quite understand — but we do as it’s a phantom pain from her life before and the DNA test with Haught.

While Bobo is trying to convince Waverly she is his angel, the devilish sister Beth tries to incant her demon hubby from the grave, only to find out she needs to spring her sister from the slammer.

“ I don’t want to die, I’ve only had sex one and a half times.” — Jeremy “Counts Handjobs As Sex” Chetri

Doc catches Waverly after she puts on her mother’s wedding dress, although her attire does not fit what happens next (unless it’s in a Quentin Tarantino movie or something). Dolls doesn’t mind Doc’s warnings there is something strange a foot and in an effort to stop Dolls from doing something rash, Doc goes and fucking does it and shoots him in the shoulder. GAD DANG IT! Doc was sure this Dolls would wear his bullet proof vest like the one in the Wynonna world.

Waverly reacts by shooting and killing Doc whose dying words are that she must find the Iron Witch and get the trophy. She would have imagined she’d be happy to find this miscreant dead, but instead she feels as though she’s lost a friend.

The first person she calls is Haught, who takes her to the Iron Witch who is, I must say, having a real “be careful what you wish for” moment. The literal wish to have Wynonna erased from her world didn’t bring her sister back, and even made her life worse. The flimsy spell can be erased for seven seconds where Haught and Waverly learn at least some of the truth.

They head St. Jude’s where apparently it’s super easy to break out a patient from the pysch ward, and with his trademark fur coat army boots look, Bobo is back in action to take them behind enemy lines to the barn where the magical trophy is stashed — but whose side is he really on?

Killing Yourself To Live 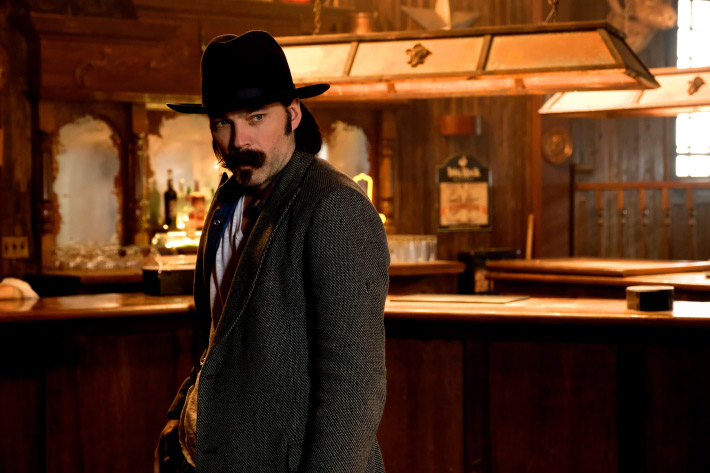 Jeremy convinces Rosita that something is happening in this world, using the same tactics as his beloved Doc (RIP) and the two are convinced it’s a government conspiracy with a hallucinagine in the water and to the barn they go. Rosita or Rosy tries to stop the mob, but as so many this episode, she bites the dust.

And so the end is in the beginning, with what we now know is a conscious decision to blow the barn up so that the Trophy and its curse is extinguished by fire.

It works! And time is set back to Wynonna. Bobo, thinking he would be sent back to hell, is surprised to awaken in this universe as well. What we know is that Wynonna technically died for a few moments a few episodes which is what summoned him from his firey home, but this time he is determined to stay above ground. He makes a deal with the widows that in exchange for breaking the seal they will convince their now risen from the grave hubby to grant him a special power that not even Wynonna Earp and Peacemaker can send him back to hell.

Speaking of Wynonna, she wakes in a field, pregnant as ever, and happy for some peace, but she spots the dastardly trio and spots the broken ring and had to stop them, but WAIT IT’S LABOUR TIME!

Out On Ghost River

Poor Perry — I think Perry is hot, and such a catch, but he’s struck out with not one, but TWO Earp sisters. I mean, I guess Waverly is no fault of his own since she’s gay, but still, rough luck.

Jeremy the Hero — I loved Doc’s speech rallying Jeremy to rise to the occasion and save the day. I also liked that a little something else was rising when Jeremy asked out Doc for drinks. Sigh, it looks like this is going to be unrequited love.