In the wake of EA’s Battlefield II debacle, there’s been a lot of debate about loot boxes and the ethics of pay-to-win design schemes. That conversation is long overdue, but the focus on mechanics can mask an equally significant aesthetic problem. Microtransactions have become so deeply ingrained in our collective consciousness that they’ve warped our sense of normal, gradually making features that used to be standard feel novel and original.

I say that after playing through The Frozen Wilds, the new downloadable expansion for Horizon: Zero Dawn. It’s a fantastic excuse to revisit one of the best games of the year. The expansion adds a new region to an already massive game world, reminding everyone that Horizon: Zero Dawn came out in 2017 just before everyone starts putting together their annual year-end lists.

What’s striking now – and what was not quite as evident when the game debuted in February – is the game’s internal consistency. Horizon never makes reference to anything that exists beyond its own game world. The mechanisms for locating and acquiring every side quest, resource, and collectible are entirely self-contained. There are no microtransactions. There are no online leaderboards. Once you load The Frozen Wilds, the game does its best to hold your attention as the real world slowly drifts into the periphery.

That’s what I love about Horizon, and good single player games more generally. Horizon is immersive (to borrow a popular cliché), and The Frozen Wilds recaptures much of its initial magic as DLC. The new territory – set in what was once Wyoming’s Yellowstone National Park – once again filters the present through pre-history and science fiction, creating a plausible vision of what the world might look like after the downfall of contemporary civilization. From the clothing to the technology to the leftover remnants of an old visitor’s center, the world becomes richer with the addition of every new detail.

However, the fact that Horizon feels noteworthy – that it somehow stands apart from its peers – is a strange commentary on the current games industry. Why should anything in The Frozen Wilds feel remarkable? All of its ‘unique’ features are things that used to be standard, at least in the sense that every game used to be self-contained (often on one cartridge) and therefore needed to be internally consistent.

That’s just not the case in 2017. I recently played Middle Earth: Shadow of War, a game that has a lot in common with Horizon. Both are open world, single-player action games in which players have to level up to take down bigger and badder foes. The difference is that Shadow of War is crammed with microtransactions that encourage you to cheat the process, offering power-ups, troops, and other enhancements that accelerate your progress. You need to spend real money to optimize your performance. Warner Bros. wants you to spend that money, so the publisher reminds you about those microtransactions at every available opportunity. 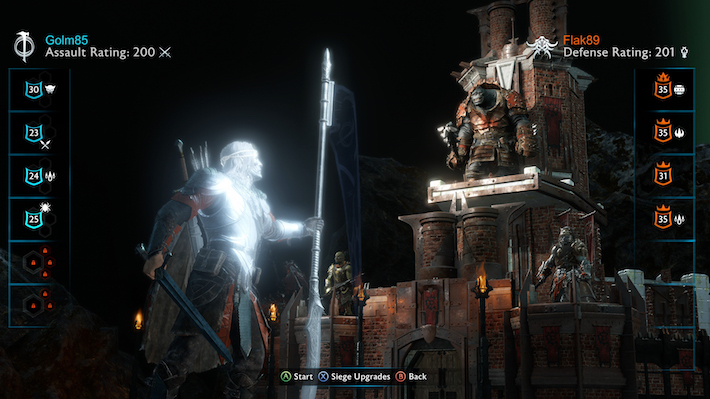 That’s the part that bothers me. Asking for more money after people have already paid for your product is tacky and obnoxious, but corporate greed is not terribly surprising. It becomes noteworthy when it encroaches on the user experience. The digital goods on display are optional. Shadow of War’s constant panhandling is more difficult to ignore. It’s the gaming equivalent of a pop-up ad, a disappointing interruption that makes you stop the thing you’re doing in order to tell you about all the great stuff that you don’t have.

The Frozen Wilds put that into context. Even though it is itself a piece of additional content, the expansion is designed to stand on its own, and it’s refreshing to sit down and play a video game that isn’t trying to upsell me on a moon roof and leather seats. The Frozen Wilds has a casual confidence that asks to be appreciated as is. The environment allows me to exist, free from any external pressures and demands, and that makes the game more relaxing because I’m able to explore the Wilds at my leisure.

Microtransactions – and more specifically the publisher’s need to make me aware of them – take away that agency. I’m never going lose myself in Mordor in the same way that I lost myself in The Frozen Wilds because Warner Bros. keeps trying to send me back to Toronto for my credit card in hopes that I’ll hand over more of my real Canadian dollars. That’s not the sort of thing I want to do after paying for a video game (especially not at the current exchange rate). If anything, my bank account isn’t as robust as I want it to be, so that’s exactly the sort of thing I’m looking to forget when I consume escapist entertainment.

That’s the trouble with a game like Shadow of War. Loot boxes in multiplayer games like Rocket League and Overwatch are slightly more tolerable because they drop during natural breaks in the action. Unfortunately, the effects are still invasive. Publishers need to push loot boxes in order to make them more profitable. Microtransactions make video games worse not because they’re inherently unethical (that’s an entirely separate debate), but simply because the apparatus that supports microtransations destroys thematic cohesion and narrative flow in a way that irreparably alters the gameplay experience for the player.

That might not be a huge problem in the short term, but it does reduce my interest in the medium writ large. Video games are more predatory than they were twenty years ago. It’s easy to miss that transition in slow motion, but the right game can bring that reality into focus. The more gaming starts to feel like a casino hustle, the less inclined I am to participate. The Frozen Wilds is a reminder of why I fell in love with video games in the first place. Here’s hoping that publishers remember why that emotional connection matters.