“Life is a journey, not a destination” or so the platitude goes. The random occurrences of the day-to-day and the anxieties and fears they can produce are seemingly quelled by this Zen mantra. “Do You Remember Moon Beam?” features how patricidal tendencies shuffle many fathers from their mortal coil, how donkeys have significant metaphorical importance, and how many journeys began, if only to come to a certain end.

The episode opens with a flashback to six years prior. The barefaced Thackery finds himself in the jungles of Nicaragua. He comes to a small village, after hearing they are experiencing a yellow fever outbreak. It’s not yellow fever, but rather the distinctive red blotches of small pocks. Here he meets Captain Robertson, chained to a post. The locals blame him for bringing the sickness into their village (sound familiar??) but Roberston denies it.

He argues that he gifted the people blankets and trinkets, and they think he laced them with the sickness. “Wouldn’t be the first time,” remarks Thackery, undoubtedly referring to the horrors suffered by the Native American peoples — something his own father personally had a hand in. 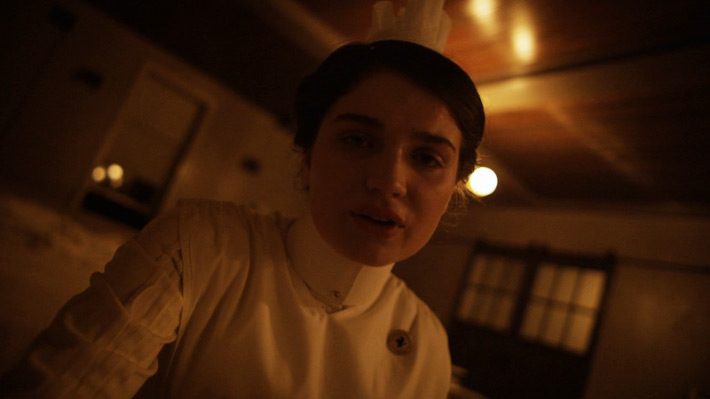 Lucy Elkins is not to be fucked with. Fucked, sure, but on her terms and with a penis soaked in cocaine, by a man older than her dad, oh, yeah and she gets her foot sucked for a hundred bucks a pop.

She tells her father so when she comes to his bedside to send him to hell. The point of view is from the incapacitated pastor. There are only a few shots showing his parlayed face, a moment where Lucy wipes spittle from his chin.

She recalls their old stubborn mule, Moon Flower. The poor animal’s sad life of being beaten and worked until she was shot for no longer being useful. “I’m too smart to let myself turn out that way” Lucy claims in part of her calculated speech. She injects him with a needle helping him on his way to eternal damnation, “By Daddy. Enjoy your trip.”

Pastor Elkins isn’t the only one doomed to the fires. After Cornelia figures her father was responsible for Speight’s death she and her brother decide to confront him at the construction site of the new Knick. The Captain calls down to his daughter from the top floor, “That’s a long walk” she remarks.

I for one, do not buy that it was the ol’Captain who killed Speight. I think it was this little fucker, and when the new Knick catches on fire, J’accuse! him and his American Psycho vibes.

Sure, you might be saying that it was more advantageous for Herman Barrow to have started the fire, given that Effie’s found out about he’s been skimming off the top for so long, and she blackmails him, wanting him to suffer financially. He is in a tight spot, considering the new construction guy is straight as an arrow.

But it seems all to convenient that Henry just happens to be outside of the burning building, just in time to console his sister after they watch their dad jump five stories from a burning building to his death (or, at the very least, extensive mutilation).

“From what I gather, the old man was a nut.” — Detective

The twisted Dr. Cotton was poisoned by Eleanor Gallinger by powder that was “Rough on Rats” and even rougher on psychotic medical professionals. The detective investigating the case finds Everett to inform him Cotton’s death was none other than cold-blooded murder. Everett plays it cool, although he must be expecting the law to find out his insane wife was the culprit.

However, she wasn’t the only one that wanted Cotton six feet under. Apparently Dr. I-Want-Your-Tonsils’ two sons had been slowly adding arsenic to his food — retribution for pulling their teeth out of their heads, most likely making them the biggest weirdos at Princeton. The two boys confessed, and then promptly committed suicide, undoubtedly bringing the theory about the link between dental work and mental health to an end.

Gallinger sighs with relief and explains to the detective that the Not-So-Good Doctor thought he was helping his children. I can’t help but see a particular irony to how Gallinger found Dr. Cotton’s practices so destructive and repulsive, yet he’s okey dokey with sterilizing young boys, without their (technical) consent in an attempt to “purify” the race.

“What gives you the right to play God?” Algernon Edwards

Fuck I hate the Gallinger gets off so easy in this episode. Algie tries to bring him to the advisory board of the hospital, attempting to prove that Everett’s work at the “Idiot House” in unethical and he should be stripped of his medical license. But Algie’s plans are foiled when the sleaze balls on the board side with Gallinger, talking shit like, “Eugenics are legit.” The creepy old dude who runs the institution where the boys were, essentially neutered, has legal guardianship over the young men, so Gallinger has done nothing wrong, apparently.

That’s about as much as Algie can take, and he waits outside for Gallinger, rolling up his sleeves in preparation for fisticuffs with the racist bastard. Gallinger claims he’s not going to fight, and that Algie’s aggression only further proves his assertion Algie is more animalistic than human. Then Everett sucker punches him a couple times in the face, most likely further molesting his injured retina.

A blind eye may have been turned to justice, and now Algie might never be able to see again.

“It’s not what you say, it’s what you do.” – Philip Showalter

Things are still tense between Harry and Tom. Tom tries to clarify that his attempt to give her a small peck was a sincere expression of his feelings for her. She goes all “cold nun” on him and claims she doesn’t care about a “gorilla” like him.

One can’t help to note her expression, to see the conflicting feelings. She loves him —I’m sure of it — but she’s still on the rebound from her failed marriage to Jesus.

The romantic stalemate doesn’t stop the two from going into business together, and they head to a house of sin to dispense their homemade prophylactics. Tom sits with some fellas and gives a grand pitch, “Don’t slip it in, until you slip it on.” Harry barely has to say anything at all to the group of women.

Thackery’s in a bad way. The pain of losing his beloved Abigail seems only to rival his necrotic bowel. He’s back on drugs (which have caused the gastrointestinal distress) and gives approximately zero fucks if anyone knows it. He’s not even DTF with his fav alley hooker, too lit and lethargic.

Not even the fact that the twins he separated are doing well and on their way to a life in Missouri can cheer him up. He doesn’t even say good-bye. Once he collapses from the pain, Bertie and Algie insist he get medical treatment. But Thack wants no surgery. It seems that seeing so many patients die on the table has caused him to be afraid of the very thing he does for a living.

He begrudgingly goes to Zinberg, his nemesis, to be subject to one of his inventions that allow the docs to peek into his destroyed bowels. The diagnosis is simple, the bowel needs to have it excised, but after watching his love’s life drain away from her, he’s going to try medicines instead, even though the one’s he’s tried so far have done nothing but make him puke.

The episode ends back in the jungle. After papier–mâching the small pox victims and blowing stuff up their noses, it seems that Thack was able to negotiate Robertson’s release. They venture out of the forest, and the genesis of Thackery’s work at the Knick is revealed; Robertson offers him employment, and Thack jumps at the chance to work with J. M. Christiansen (who ends up blowing his brains out). They walk out the village, the now deceased Roberston thankful for what’s left of his short life, Thackery looking forward to the surgical exploration that will cause him to be both literally and figuratively dead inside, and their donkey—their trusted mule—quietly and obediently following them, nothing more than a figure foreshadowing the inevitability of death.

On The Operating Floor

New Yawk – Can we take a second to point out the complete futility of the character Jimmy? I mean, I know he’s like “The Muscle” and everything but every time that guy opens his mouth with his thick NY accent I’m like, “Why are you here again?”

Gas Lighting – Cornelia really can’t catch a break with her new hubby. He wants her to move out of the Big Apple to the all so exciting Ohio because he’s working there on petroleum and essentially gives her an ultimatum that he’ll find someone else if she doesn’t submit. What an asshole.

Sister, Sister – It is so fucking creepy that Gallinger is sleeping with his crazy wife’s sister. I mean, not that I didn’t see it coming, but when she asks him to screw her on the floor it’s like, “Are you guys really thinking this through?”

Also, I wager we haven’t seen the last of Eleanor. I bet she got a good shot of Everett’s semen when they did it before she went to the nutter house and she’s with child. Knowing how fucked up Everett is he’ll probably just take the baby and make Dorothy raise it—I mean, before he gives it meningitis that is.