“I was just thinking what an interesting concept it is to eliminate the writer from the artistic process. If we could just get rid of these actors and directors, maybe we’ve got something here.” -Griffin Mill

In hindsight, it feels like Robert Altman was a beloved filmmaker for decades. The truth is that after his groundbreaking burst of creativity in the early 70s, the man essentially disappeared until the 90s. Sure, he kept working. The movies just shrank in scale, release, and appeal, frequently disappearing to rare cable broadcasts following barely visible theatrical releases. Altman was essentially persona non grata in Hollywood until the The Player took Cannes by storm an instantly revived his career. That Altman managed to win back Hollywood’s favour by mercilessly mocking their business and storytelling practices was an irony that likely wasn’t lost on the director. He was a man who loved lifting a middle finger to the establishment after all and the fact that the soulless, heartless studio types that he mercilessly depicted here suddenly embraced him because they were convinced he was talking about the other guy might be the greatest practical joke the Altman ever pulled. it’s such a pleasure to see this somewhat forgotten studio satire finally get some long overdue recognition through the Criterion Collection.

A particularly smarmy Tim Robbins stars as a studio executive who receives threatening post cards in the mail from a spurned screenwriter whose impassioned pitch he dismissed like countless others. He’s convinced the culprit is a particularly bitter writer played by Vincent D’Onofrio and an attempt at confrontation ends in accidental murder. Robbins hastily covers it up and spends the rest of the movie dodging the cops and new letters from his actual pen pal stalker, even seducing D’Onofrio’s former girlfriend (Greta Scacchi) while inadvertently writing his own Hollywood thriller that hits all of the touchstones, especially a happy ending. The lead character is sick, suffering from a particular mixture of narcissism, apathy, and greed that defined so many of the slimy suits in studios that Altman spent decades working with. The movie mercilessly attacks that mindset, but subtly within a goofy Hollywood satire and detective tale that makes it all feel like a fun romp rather than a bitter decree.

Like any Robert Altman joint, the main strength of the picture is the world the director creates with an anthropological attention to detail. Dozens of actors, producers, writers, and filmmakers cameo-ed as themselves years before cable comedies turned that into a cliché. Altman’s roving cameras captured snippets of their self-mockery while drifting in an out of his oddball LA detective tale. It was his second entry in that specific subgenre following the woozy wonders of The Long Goodbye. While that movie strove to elevate the gently surreal stylings of Raymond Chandler into a drugged up dreamstate, Altman’s story in The Player is more self-conscious and self-critical. The Player is ultimately a Hollywood fantasy that conforms to all of those cozy conventions in bitterly satiric ways that prove how toxic that limited form of storytelling can feel. It all concludes with one of the most ironically happy endings ever filmed, with bright colors and a swirling music underscoring a sick and evil victory. The Player may have mocked celebrity self-obsession on the surface, but it’s deeper target was the evils of the tired tales these executives choose to greenlight and how the fantasy they sell can be just as bad for us as the coked up world of greed that they live within. Pretty complex stuff for a comedy. That’s Altman. 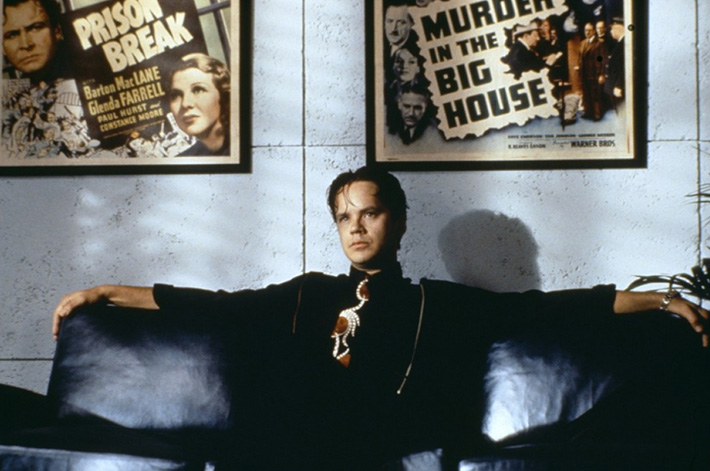 After years of disappointing home video transfers, Criterion has delivered a disc for The Player worthy of Altman’s craft and care. From the legendary opening tracking shock that Altman used to introduce his meta movie universe, there’s beautiful depth and clarity never seen before on any release. Altman movies dramatically benefit from HD because his cluttered frames contain so many details and characters that viewers eyes can be overwhelmed. Only in Blu can you see the entire world that he laid out properly. Now, it should be noted that the slightly soft focus and beige color palate deliberately deployed here isn’t exactly as crisp or vibrant as the average comic book movie. So as wonderful as the film looks, viewers must accept the natural limitations of the material. The same goes for the soundtrack, which is clearer than ever yet still overwhelmed by overlapping dialogue designed to reward multiple viewings.

The special feature section is where this disc really takes off. First up comes a parade of archival features from the old Criterion laserdisc. There’s a jovial commentary track from Altman, screenwriter/novelist Michael Tolkin, and cinematographer Jean Lepin discussing the motivations of the film and all the various subtle techniques used express them. The trio also provide separate commentaries just on the opening tracking shot beyond that gives a nice sense of all of the meticulous planning and improvisational freedom that went into that 9 minute wonder. After that comes a selection of deleted scenes and outtakes with a few unexpected extra cameos. Finally there’s an Altman interview that provides a more succinct discussion of the film.

The brand spanking new features kick off with a short documentary about a special fundraising sequence in the film that was shot and staged during an actual fundraiser to stretch The Player’s meagre budget. It’s a little dated and corny, but in an amusing way. Next there’s the full 56-minute Cannes Film Festival press conference featuring Altman, Tolkin, and a handful of cast members that’s an unintentionally ironic historical document of the same ego-filled film world that the movie mocks. Finally, the best of the new material is a 45-minute documentary about the making of the movie featuring candidly honest interviews with Tim Robbins, Michael Tolkin, associate producer David Levy and production designer Stephen Altman. All of them are immensely fond of the film and share stories about inventing the ending on the fly and how Altman puffed joints and played with a scale toy model of the studio to plan his infamous opening tracking shot. Toss in the usual trailers and TV spots and you’ve got a definitive Blu-ray of The Player that will likely never be topped.

For anyone who loves Robert Altman or that strange little subgenre of movies about movies, this is a disc that needs to be purchased immediately. Great stuff.

Next Article »
Inside Out: Hurricane Bianca