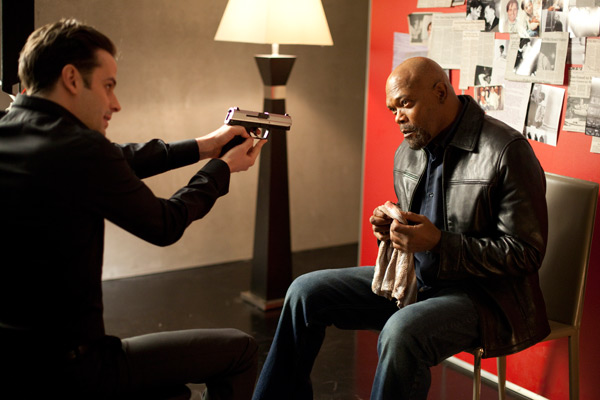 As the dark title screen of The Samaritan dissolves into grainy focus, we get a point of view shot of some bruised and battered guy with a gun barrel to his forehead begging for his life, seconds away from getting his brains blown out. The scene sets the stage for a very intimate and gritty film that director David Weaver has attempted to make with The Samaritan, but it’s a shame that this neo-noir’s gloomy tension only leaves us high and dry.

The Samaritan follows the story of ex-tough guy Foley (Samuel L. Jackson) who we see released from a 25 year prison stint for a crime we’re initially given little information about. This is good, as Weaver uses Foley’s ominous allusions to his mistakes only to give us a taste of the bitter and corrupted past that precedes the now reformed Foley.  Although Jackson’s role in the film is essential to The Samaritan, it unfortunately only contributes to the film’s lesser success as a ‘hard boiled’ styled thriller, and instead only adds to it’s larger failure as a film of this genre.

We meet Foley as he lies awake in his decrepit jail cell, haunted by memories of his past. It’s watching Foley’s lonely glide through the prison gates amidst other rehabilitated felons in loving embrace with their family members, solitarily drifting off into the lonely horizon that sets Foley apart from the rest. Weaver hits a nerve here and Jackson’s quiet and mysterious demeanour are well acted- for this portion of the film at least. As Foley visits desolate bars and walks empty downtown streets with steam pluming from every subterranean orifice, Weaver’s handle of the traditional ‘hard boiled’ atmosphere here is formidable. Filmed and set entirely in Toronto, it’s really quite interesting to see our typically shiny and sleek metropolis become a dingy Gotham City of sorts and when the nefarious playboy Ethan (Luke Kirby) comes into the picture, it’s clear that we have our Joker.

At first, Ethan is just as cryptic as Foley’s:  he asks Foley to accompany him to his night club, offering him Cocaine and sex with a cracked out, yet somehow beautiful, prostitute Iris (Ruth Negga). Weaver sets this early part of the story up wonderfully as he recreates the essential allure that most noir’s strive on: the absolute uncertainly that we as spectators have about any character’s motives, and the undeniable desire to sort out the pieces to this often deadly puzzle.

All of this sounds pretty good, right? Well the real problem with The Samaritan begins once Foley starts dating heroin addict Iris, I guess as some kind of homage/ alternate reality to one of the grittiest films of all Taxi Driver. Unlike the more or less single note (and towards the end psychotically obsessive) societal cynicism that Martin Scorsese’s Travis Bickle exudes, Foley transitions from the ‘man with a haunted past’ persona to ‘old guy in awkward relationship with young girl’ disposition. This isn’t something I would typically find detracting from a film, but seeing as The Samaritan starts off in such an abrasive manner (we literally feel like we’re holding a gun to the beaten up dude’s head), it’s unbelievable and just weird watching Jackson make out with someone 40 years his junior.

When Foley is manipulated by Ethan’s disturbing revelation of the true nature of Foley and Iris’ relationship, we see Weaver paying homage to one of the most notorious revenge plot films ever made (without giving too much away, its Korean if that helps) with The Samaritan. But when the film radically shifts gears to become a heist picture of sorts, it becomes increasingly obvious that The Samaritan is a confused film.