The Long Dark, currently available on Steam in Early Access, is an arctic survival simulation from Hinterland Games. The studio, operating out of the wilds of Vancouver Island, is offering a unique and often emotional experience that strands you in the freezing wilderness of northern Canada. I’ve logged seven hours in The Long Dark’s Sandbox Mode so far, and the game has already made me jump, yell, flinch, shiver and crank up the space heater beside my desk. While many games portray the struggle to survive as an empowering adventure, The Long Dark’s dedication to realism makes it a bleak and lonesome experience. 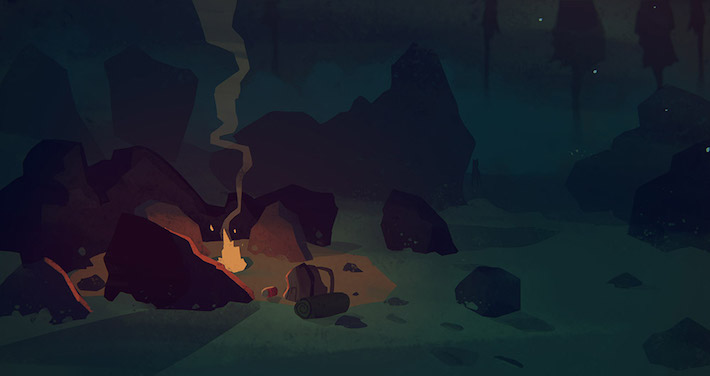 It almost seems strange that the game’s official description stresses that “There are no zombies,” but it’s true that the survival genre has become dominated by games that feature zombies as your primary adversary. With popular survival games like DayZ, How to Survive, Dead State, or the upcoming Dying Light, you don’t even need to look past the titles to know they are going to be infested with the undead.

It’s gotten to the point where a lot of the zombie survival games on Steam don’t even use the word ‘zombie’ in their descriptions, as if they’re so much a part of the genre they don’t bear mentioning. A World War II game doesn’t have to say you will fight Nazis, and a fantasy RPG doesn’t need to specify there is a dark lord. The description of 7 Days to Die, also in Early Access, states the game features “survivalist and horror themes”, then goes on to describe the crafting features. The zombies are implied.

Even if it’s not zombies, survival games still feel the need to spice things up with something to fight. In Nether there are shadowy monstrosities. In Rust and The Forest you fight bands of savage cannibals. The acclaimed Don’t Starve is described as “an uncompromising wilderness survival game”, and that it may be, but you’ll also have to fight a variety of fantastic creatures.

The Long Dark sets itself apart from the crowd by pitting you against a foe that is more realistic and, in its way, more unsettling: a harsh and indifferent wilderness. Why is it not enough to survive the elements? The snow might let up and you might make it through one more night, or the temperature could plummet, the wind making a mockery of your light jacket and toque, and you’ll freeze. Nature is implacable. Once I searched a frozen corpse half buried in a snow bank and found a single rifle round. I wondered why this person died, why all these places were so utterly abandoned. Why was nobody coming to find these people? That’s when I realized that soon I would be dead too, another frozen corpse with a rifle round in its pocket. Zombie games have never made a chill run up my spine like that.

The Long Dark does have wolves, and in a way they take the place of zombies as an aggressive and ubiquitous adversary, but they are never to be thought of as disposable goons. In my first game of The Long Dark it took me about thirty seconds to find a wolf and get killed. In my second game, I made it about ten minutes before being attacked. That time I fought the wolf off, then bled to death a minute later. Wolves are not like zombies where you find a decent weapon and start dropping them by the dozen. Even later in the game when you are better equipped, a wolf must be taken seriously every time you encounter one. Every confrontation is costly, whether you lose a chunk of health or use a precious bullet.

Zombies or bandits or monsters are often used to break up the tedium of survival activity like scavenging food, finding a place to sleep, or crafting a new tool. Resource collection is treated as a side activity that facilitates the combat. In The Long Dark you are lucky to survive any fight with a wolf, and it would take a miracle to survive two in a row. The game switches the emphasis. Your main activity is managing your needs for food, water and shelter, and pitched combat is to be avoided at all costs. It’s almost similar to survival-horror – you never stand your ground against enemies in Amnesia or Outlast – but while a good horror session is punctuated with adrenaline pumping thrills, an ideal session of The Long Dark is slow, methodical, and uneventful.

Does that make it a good game? I was thrilled when Fallout: New Vegas included a Hardcore Mode that requires you to eat food, drink water, sleep and makes it much harder to heal. My favorite moments in that game involve being stranded with crippled limbs and radiation sickness, hounded by enemies, and being forced to throw every available resource into surviving. In this Early Access incarnation, The Long Dark has already given me plenty of moments like that.

Whether eating from my meager cache of food, burning wood for warmth or to cook, or just wearing out my clothes while walking to the next point of interest, something about the game makes me feel like I’m constantly dying, that no matter what I do I’m slowly losing. Failure feels inevitable, so every step in the snow is another closer to death. But the disempowerment is deliberate, and that’s why I can’t stop thinking about the game. The Long Dark has a long way to go but I’m excited to see what Hinterland does with it next.